In the past couple of years, a groundswell of townhomes in the village—about 75 are under construction or have recently delivered—has added housing where surface parking, grassy lots, or low-rise commercial once stood.

Continuing that trend is a project called The Marbut by Pellerin Real Estate, developers of The Beacon in Grant Park and several other EAV ventures. With a curved façade suggesting yesteryear Art Deco designs, the three-story project is rising along Glenwood Avenue, one door down from Holy Taco. 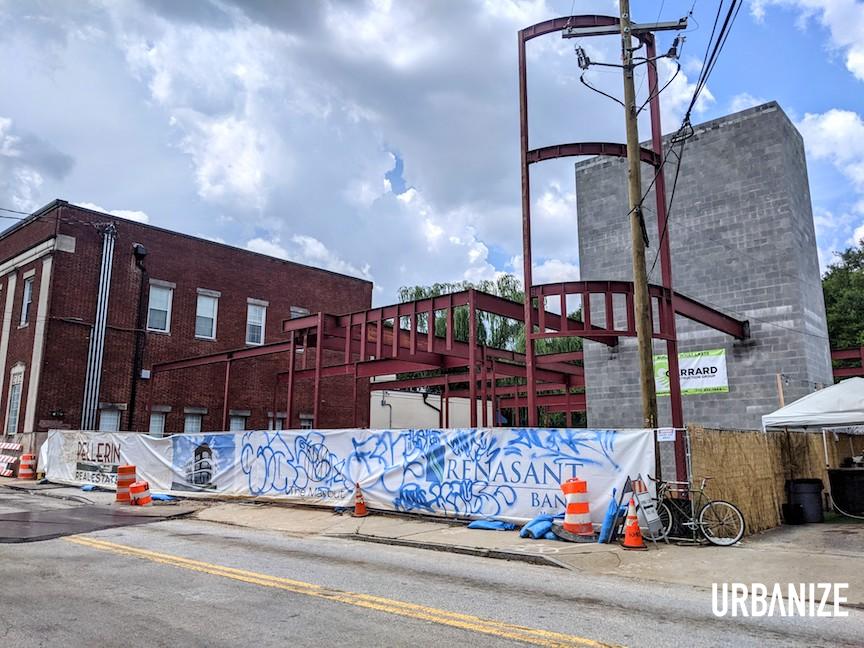 Pellerin acquired the parking lot site in 2019 and broke ground in November. The 25,600-square-foot structure will have 6,000 square feet dedicated to ground-floor commercial spaces, topped by 21 one-bedroom apartments on the second and third floors.

The company’s principal, Philippe Pellerin, tells Urbanize Atlanta the project could open later than expected but should debut this winter at the latest. Leasing efforts are underway, now that the building’s taking shape, and Pellerin says the project has attracted “great interest” thus far.

“The commodities markets keep throwing new delays or unexpected costs [into construction timelines], but we’re happy to report the project is progressing and will wrap up late this year,” Pellerin wrote via email.

The apartments will be the most centralized new rentals in the village. Pellerin expects rents to start at $1,500 for standard one-bedroom flats and increase to around $2,000 monthly for larger one-bedrooms with dens.

The Marbut marks Pellerin’s fifth project within a few blocks along the avenue. It's happening concurrently with the Southern Feedstore food hall project that’s expected to introduce six new concepts this summer where the Graveyard Tavern operated for years.

Other Pellerin projects in EAV include three revitalized storefronts on Glenwood Avenue for OxFit gym, OxWork business club, and a fusion coffee shop concept by The Victorian plant purveyor and Bellwood Coffee.

Hippin Hops Brewery and Oyster Bar has recently opened in a formerly vacant pharmacy space next door to The Marbut.

The Marbut takes its name from the Flat Shoals Avenue brick building on the corner, opposite the brewery, which was originally constructed by the Marbut & Minor General Mercantile Store.

Eventual plans call for renaming that early 20th century building—currently home to a Truist Bank branch—“The Minor” and renovating it in a way that retains its historic character, according to Pellerin.

“[Truist] will remain in the building until at least 2023,” Pellerin says. “Any major redevelopment would occur once we know their future at the property.”