In another sign that developers are bullish on downtown’s SoNo section (that’s South of North Avenue), a new mid-rise community is under construction that’s planned to bring nearly 300 residences to Courtland Street.

Woodfield Development is building a 16-story apartment venture, called 505 Courtland for the address, with many units overlooking what was once viewed as a hindrance to SoNo investment: the controversial Peachtree-Pine homeless shelter, which was closed in 2017 and taken over by Central Atlanta Progress.

The project marks SoNo’s first new tower structure in more than a decade.

Designed by Dwell Design Studio, 505 Courtland is expected to bring 284 apartments atop a new garage with 287 spaces, scheduled to deliver in late 2022, with first move-ins next summer. About 18,000 square feet of amenity space—but no retail— is planned. 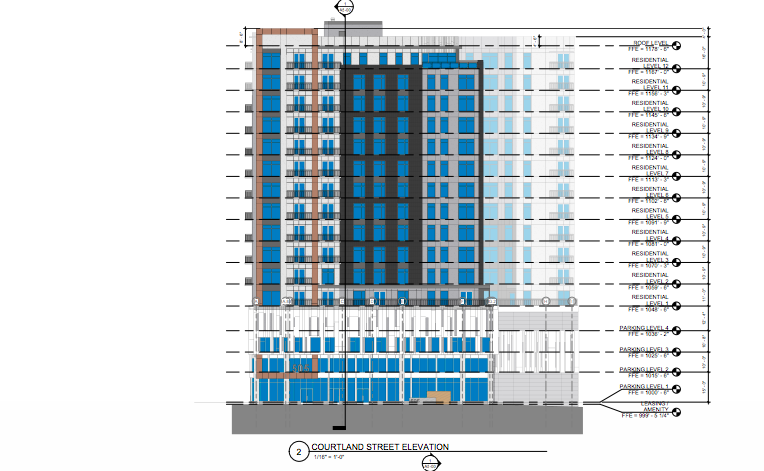 Rendering for the westernmost side of the building facing Courtland Street. Woodfield Partners

Drapac's chief operating officer, Sebastian Drapac, called the subsection of town a “no-brainer” at the time.

“[SoNo] has all the ingredients and its own unique flavor, which is why there is so much development activity and demand from the big boys in this pocket,” Drapac said in a September announcement. “The organic push into SoNo and downtown is also due to the serious shortage of sites in Midtown, and we need to remember that Atlanta’s rapid urbanization story is still in its infancy.” 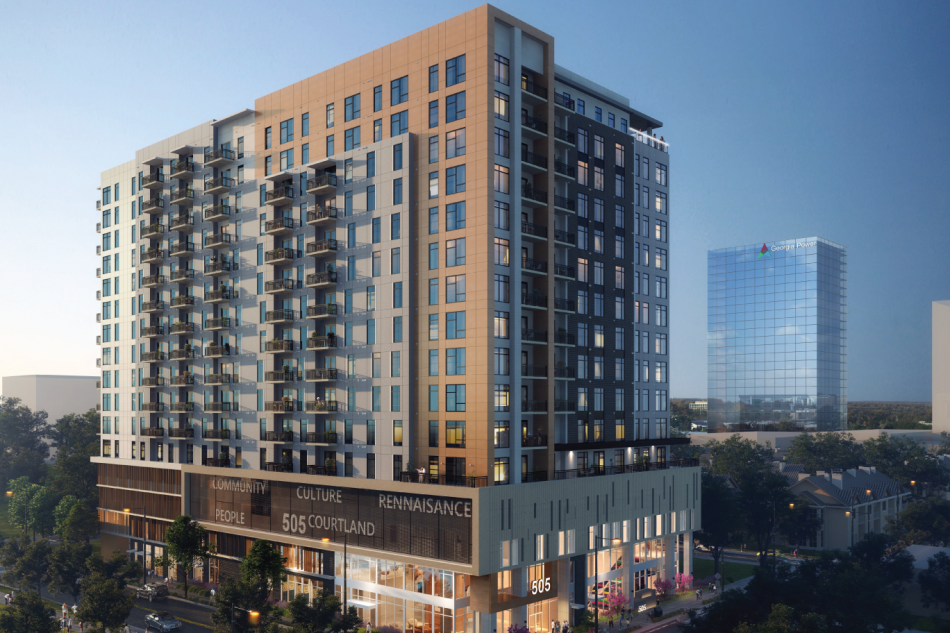 The 16-story project's latest rendering, as viewed from the northwest. Woodfield Partners

In an email to Urbanize Atlanta, Woodfield's Patrick Kassin said contractor CBG is currently pouring the fourth floor of the project's parking deck and amenities level. Ground broke in September.

Across the street on Renaissance Parkway, Dezhu US is marketing its new 124-unit, seven-story 126 Renaissance building as condos following talk last year of going hotel, with prices ranging widely from $236,000 to more than $1.1 million.

Nearby on Piedmont Avenue, Braden Fellman Group bought the former United Methodist Church’s chapel and six-story office building last year with plans for turning it into modestly sized apartments soon. And lest we forget the Connector-capping “Stitch” park concept that would be built just to the south, should it awaken from hibernation and find viable funding sources.

[UPDATE: 1:22 p.m. May 24: This article has been updated to reflect that 505 Courtland falls within downtown's borders—and that the September quote should be attributed to Drapac, not Kassin.]