A compromise in the saga involving flashy new branding atop Atlanta’s second-tallest skyscraper has been reached.

Financial institution Truist is proceeding with the installation of its name and logo atop the former SunTrust Plaza building downtown—a 60-story landmark designed and developed by storied local architect John Portman—but original plans have been scaled back.

But the new plan, according to McCoy, is to have only the company’s monograms atop the building facing east and west. Meanwhile, the Truist name alone will peer down over the Connector and also toward the south.

“The monograms were installed last weekend, and we expect the Truist name will be installed in coming weeks, depending on weather,” McCoy wrote via email. 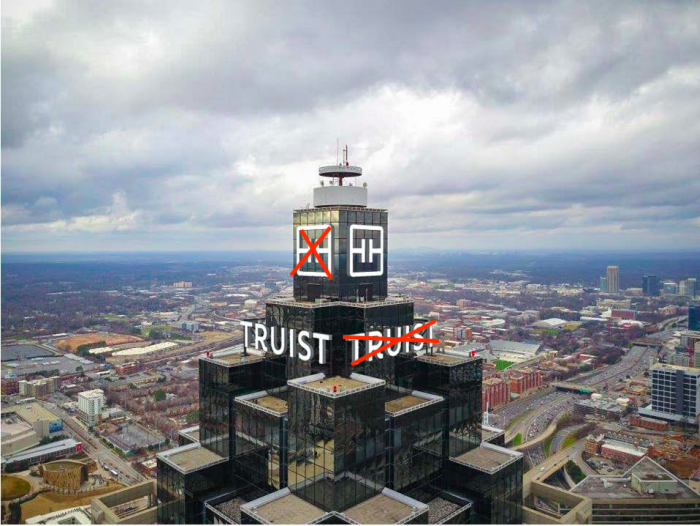 The branding project came to light, so to speak, last month when an Urbanize reader complained that the trend of installing corporate branding atop some of Atlanta’s most iconic skyscrapers is cluttering the city’s skies.

A few days later, the city issued a “stop work” order and a notice calling for “corrective action” following an anonymous complaint that led city staffers to inspect the crown of the 303 Peachtree Street tower. 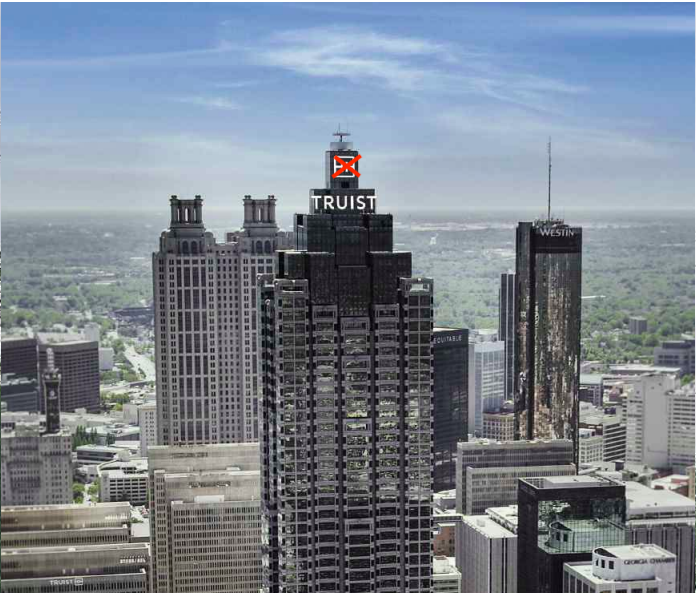 Truist’s name will stand in brilliant lettering about 12 and ½ feet high at the building’s apex. The monograms are 22 feet tall.

As with the renaming of the Braves’ SunTrust Park, Truist’s downtown signage is part of a broader effort to purge the SunTrust and BB&T brands, following the merger of those banks that formed Truist in 2019. Interior, façade, and street-level signage is also being changed at the former SunTrust Plaza downtown.

Truist reps have said the signage will be symbolic of a brighter future for the company and city.

One reader who noticed the east-facing monogram from John Lewis Freedom Parkway on Monday wrote in: “It doesn’t look awful.”