With a new academic year well underway, it’s time to take to the skies and see how the Savannah College of Art and Design’s rapidly expanding Atlanta campus has transformed a former low-rise motel and other underused property in Midtown’s northernmost blocks.

The most recent two-building project, collectively called SCAD Forty Four, was modified from earlier designs that had called for a single, taller tower standing 20 stories.

Now, the first 10-story phase—the northernmost, gray-painted building—opened in August with 581 student beds, a dining hall, and a parking garage. 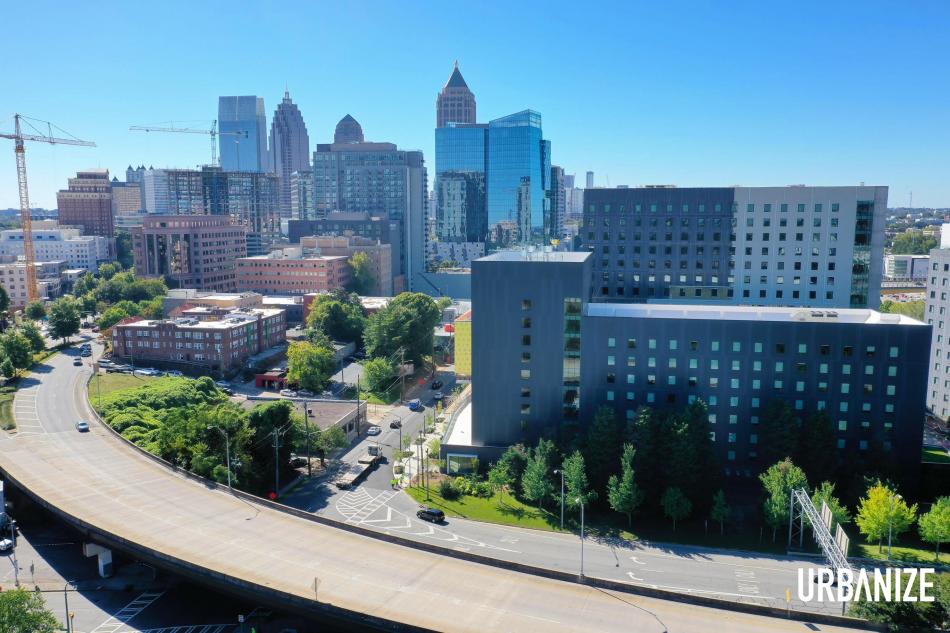 SCAD had initially planned a more consolidated approach for its next wave of student housing, with 1,000 beds in a single dorm complex with other components; those plans were nixed so that part of the housing could deliver in time for fall 2022 semester, per a school spokesperson.

The costs for future creatives to dorm at SCAD Forty Four start at $10,586 for this academic year, which gets a bed in a quad suite with three roommates and a full kitchen.

A private studio with a kitchenette, meanwhile, will set a student (or their parents) back $12,185 for this school year.

Next door, SCAD delivered a sleek, 14-story student residential building (SCAD Forty, named for the school’s 40th anniversary) topped by an event space in 2019. It stands across the Connector from Atlantic Station, offering nearly 600 new beds.

Elsewhere, SCAD bought two nearby properties in 2020, including the John Marshall Law School Building on West Peachtree Street, in hopes of eventually creating a presence in north Midtown on par with Georgia Tech’s in the center of Midtown and Georgia State University's downtown.

In the gallery above, have a sky-high look at where SCAD’s expansion stands today—and how it’s all planned to fit together come next school year.