A development team has been selected to bring nearly 200 affordable residences to a long-idle downtown site project leaders have described as one of Atlanta’s “most convenient locations.”

Invest Atlanta’s board approved a proposal Thursday submitted by Vecino Group Southeast and Capitol Hill Neighborhood Development Corporation, as designed by the SSOE/Stevens & Wilkinson firm, that calls for an eight-story building with 218 apartments and retail space on vacant land across from City Hall.

Of those, 186 units are expected to be reserved as affordable housing, exceeding requirements outlined in a request for proposals issued by Invest Atlanta and city leaders in September.

Vacant and fenced-off for more than a decade, the 1.3-acre site is within walking distance of three MARTA stations, as Department of City Planning officials have noted.

The Atlanta City Council voted unanimously in May to offload the corner parcel at 104 Trinity Avenue SW for $1 to Invest Atlanta, the city’s economic development arm. 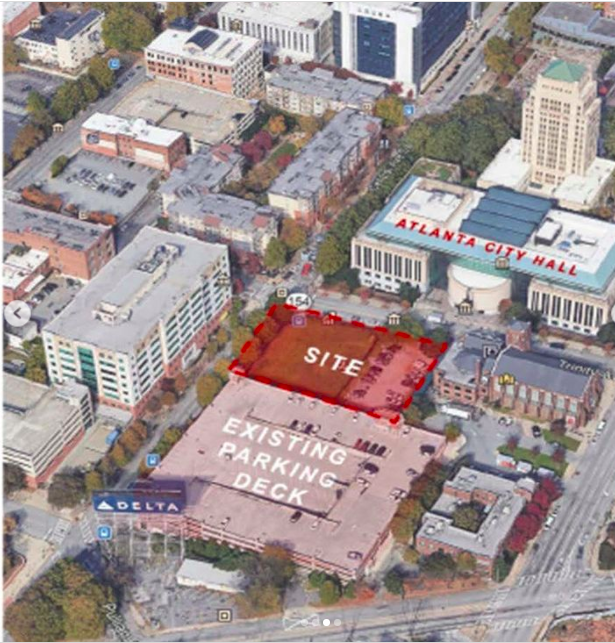 The 1.3-acre parcel in question near City Hall. Atlanta Department of City Planning/Instagram

The property will remain under Invest Atlanta’s ownership and be leased for 99 years instead of sold outright, allowing “the development team to achieve deeper, longer-term affordability for residents and local businesses by saving millions of dollars otherwise spent on land acquisition in a traditional property sale,” city officials noted this week.

Vecino has experience developing affordable and supportive housing by way public-private partnerships across the country, according to the company’s website. Its partners, the Capitol Hill CDC, are lead by Fabric Development.

In addition to apartments, the project is expected to feature 7,500 square feet of street retail with a focus on smaller local businesses. Plans also call for an 18,000-square-foot urban garden atop the parking deck and the largest solar array on any multifamily building in Georgia, officials said.

Those green, sustainable facets are expected to reduce energy use in the building’s common areas by 30 percent, bringing down residential utility bills in the process. 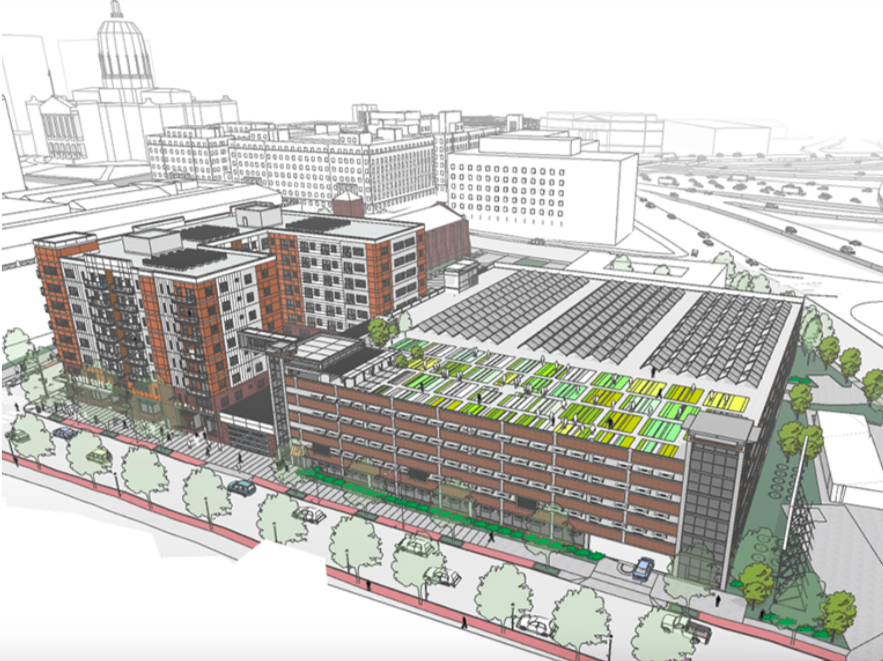 "Residents will be able to enjoy an 18,000-square foot roof garden on the parking deck," according to the design team. The parking deck will also feature a Solar Harvesting Area.SSOE | Stevens & Wilkinson

The 104 Trinity project, according to outgoing Atlanta Mayor Keisha Lance Bottoms, could serve as a model for how the city leverages vacant public land to sprout attainable housing and small business opportunities. “This is a concept we can replicate across Atlanta,” said Bottoms in an announcement, “to ensure our untapped public assets reach their fullest potential and meet the needs of the community.”

The deal is being called a key piece of the One Atlanta: Housing Affordability Action Plan, which calls for creating 20,000 affordable units by 2026.

A master development agreement between Invest Atlanta and developers is expected to be finalized by May. Timelines call for finishing construction of the building by September of 2025 and reaching full occupancy a year later, which seems like plenty of runway to deliver on time.

Pavan Iyer, owner of the eightvillage design firm, sent over plans for his company’s 104 Trinity Avenue runner-up proposal. (That called for 176 units in seven stories, ranging from 375 to 1,000 square feet; rents for 65 percent of apartments would have been reserved as affordable between 30 and 80 percent AMI levels.) Iyer said his firm was among two shortlisted finalists.

Have a closer look at plans picked by city leaders and those compiled by Iyer’s firm in the gallery above.