A large residential project is advancing next to a poplar Atlanta restaurant in a move that would continue the Memorial Drive corridor’s explosive growth just east of downtown, according to building permit activity this week.

The project, identified as Broadstone 230 MLK in recent paperwork, would entail 278 units where Moore and Hill streets meet MLK Jr. Drive in the Oakland community, bordering Grant Park. The site is just west of the famed cemetery of the same name.

At the southeast corner of the site—and not included in development plants, to our knowledge—is Nick’s Food to Go, a family-owned, Greek takeout institution that’s operated in the corner building since 1994.

According to the most recent property records, the 2.5-acre parcel in question last sold in 2016 for $4.1 million. A special administrative permit, or SAP, has been approved for the multifamily build.

Permit filings this week indicate that work on the project’s parking garage, foundation, and underground utilities is preparing to move forward.

Atlanta multifamily developer Perennial Properties is listed as developer in site plans. Emails to that company and Nick’s restaurant today haven’t been returned. 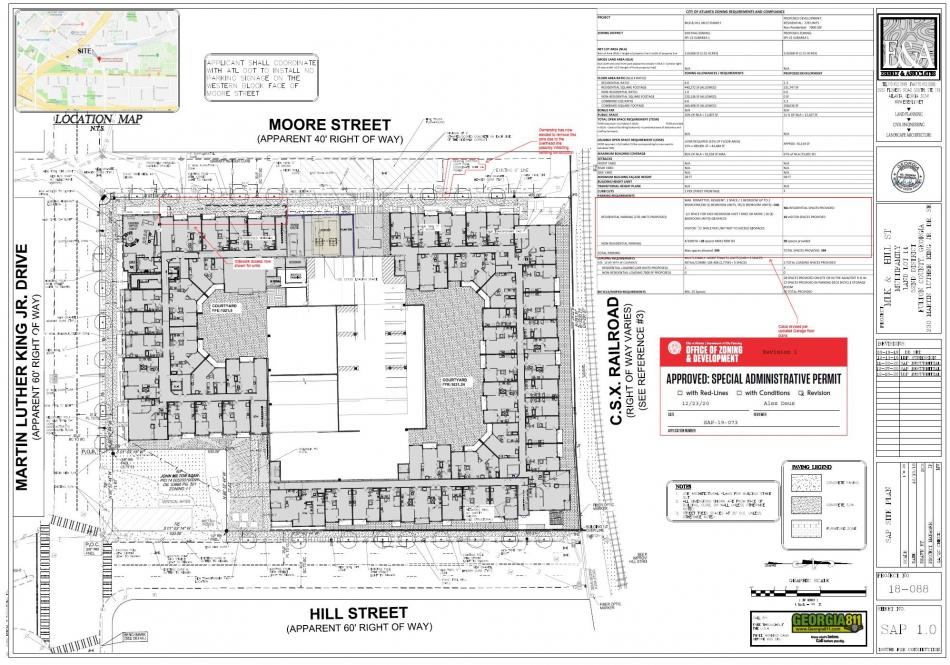 Overview of the proposed 278-unit building with the restaurant's property not included at the bottom left corner. Dynamik Design/Perennial Properties

Plans indicate the project would also include about 7,000 square feet of non-residential space—ostensibly retail, or amenities—and 399 spaces of resident and guest parking, the maximum allowed.

The site in question today, looking toward downtown, with the gyro restaurant at the corner. Plans for a large apartment building that is being built in Atlanta.

If all of this sounds familiar, rumors swirled in 2017 that Nick’s was going to fall for development and that the owner was closing up shop, as a billion-dollar wave of mixed-use investments continued to sweep down Memorial.

That ultimately didn’t happen, obviously, and nothing so far indicates Nick’s has intentions of going anywhere.

UPDATE: A Nick's representative provides Urbanize Atlanta with the following statement: "We're aware of our new neighbors coming soon. We're excited about their arrival and hope we'll continue to serve gyros for a while. Hopefully, we won't be too ugly for the neighborhood, LOL."