Although vertical construction may have started, Portman officials gathered this week alongside City of Atlanta and BeltLine leaders for a (ceremonial) groundbreaking, commemorating another project that aims to enmesh itself with the Eastside Trail’s energy and patronage.

It’s been unnamed, titled O4W Office, and now is called Junction Krog District, with a website that makes the name officially official. 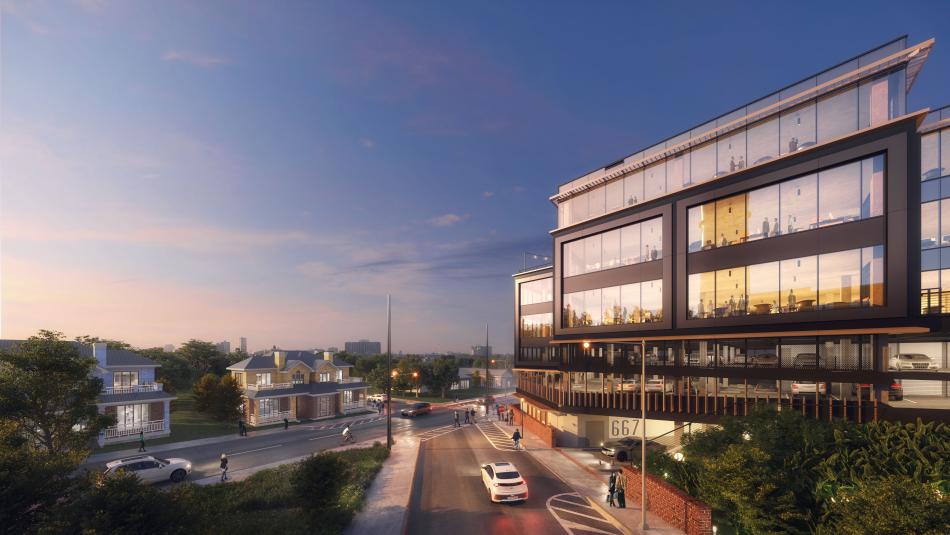 Along with three stories of Class A offices, the 130,000-square-foot building will have about 7,000 square feet of ground-floor retail in a “public porch” setting, dotted with murals and sculptures. Three restaurants are planned for those spaces, according to a Portman Holdings announcement this week.

The designed, as compiled by Portman Architects, aims to capitalize on 300 linear feet of Eastside Trail frontage, inviting the public toward retail and a kiosk space, plus bike and scooter storage and terraced seating areas, as development officials previously told Urbanize Atlanta.

The intent is to make the public facet feel like a massive porch, or outdoor living room, raised a few feet from the BeltLine and future light-rail transit.

Other developers had tried to put plans in motion for a hotel on the 1.3-acre site at the southwest corner of the BeltLine and Irwin Street six years ago, but that ultimately sputtered. Portman bought the property for $5.5 million in 2018 and had also initially envisioned building a boutique lodge, until COVID-19 squashed those plans.

Finalized designs call for 206 parking spaces, or about 1.5 spaces per 1,000 square feet. One hundred bike parking spaces with valet service—along with showers for bike commuters—are also in the mix, Portman officials have said.

The full project is scheduled to deliver next summer.

This week’s festivities included fresh renderings, as compiled in the gallery above, that lend new perspectives on how Junction Krog District will look and function.