The internet has been abuzz this week with talk that several beloved businesses—and local nightlife institutions—along the Ponce de Leon Avenue commercial corridor will be wiped out for high-dollar development. The source, in one case, was a small business that says it’s being forced to shutter.

But according to Virginia-Highland leaders, the eastside neighborhood in which the supposed development play falls, nothing is official. At least not yet.

The talk of iconic establishments such as The Local and MJQ Concourse being razed for new construction hits a sore spot for many intowners, who’ve recently watched several cherished local businesses shutter or announce closures in the same general part of town, including LGBTQ dive bar Model T and more recently 8Arm restaurant and The Highlander. 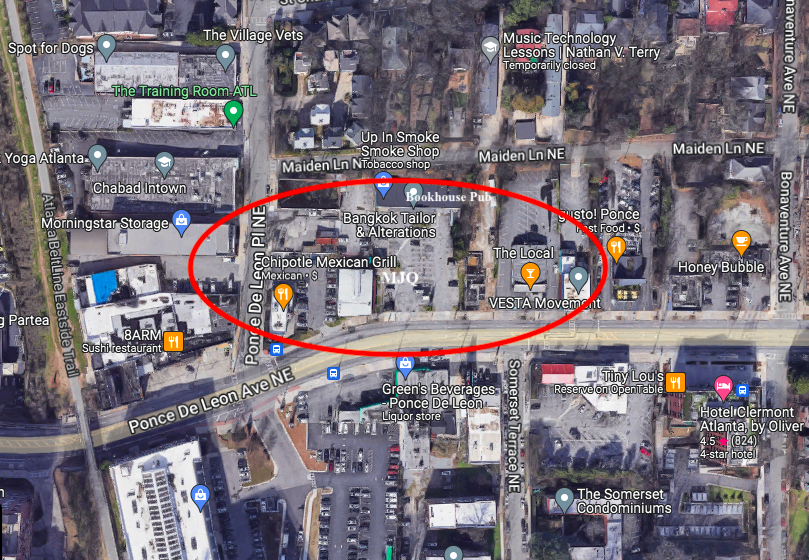 Rough depiction of the Ponce parcels targeted for development, according to social media from one longstanding small business in the corridor. Google Maps

The scope of the purported Ponce development varies, depending on which internet rumor you’re reading. But VESTA, a fit-boxing gym that opened at 774 Ponce de Leon Avenue in 2015, went public with specifics on Monday, vowing to find a new location and posting on Instagram:

“News just broke of our entire block—from our building all the way to Paris on Ponce—being sold. We are among the small businesses being bought out by developers with a lot of money. It is very hard to comprehend how big of a change—and loss—this is going to be for the city that we know and love. But while our time on Ponce is coming to an end, we are not.”

Beyond VESTA, that block is home to Chipotle, MJQ, The Local, Friends on Ponce, Southern Star Tattoo, The Bookhouse Pub, The Drunken Unicorn (an additional live music venue at MJQ), among other businesses.

Residents and in-the-know community heads contacted by Urbanize Atlanta say there’s validity to VESTA’s concerns, but nobody’s being more specific as to what’s going to change exactly, who’s driving the changes, or when they might come.

David Brandenberger, Virginia-Highland Civic Association president and a longtime neighborhood resident, said via email there’s “nothing to comment on” beyond “conjecture at this point” regarding potential changes along Ponce.

“We will update you if anything changes,” Brandenberger added.

The Ponce corridor—as seen looking south, just east of the BeltLine—where Atlanta institutions such as The Local and MJQ operate. Google Maps

Property records indicate the five parcels between VESTA and Chipotle on the western corner of the block are currently owned by five different individuals or corporations.

The two Ponce buildings immediately east of VESTA, home to gusto! bowls and wraps and Java Jive, are owned by veteran Atlanta developers Selig Enterprises, according to property records.

Between all of those properties and the BeltLine’s Eastside Trial is the fire-damaged former Paris on Ponce building, where six-year-old 8Arm restaurant is closing its current dining program in an adjacent building Saturday.

Buckhead-based developer Cartel Properties recently bought the last piece of that 1.2-acre Virginia-Highland property—where Paris on Ponce had operated in a quirky space dating to 1925—needed to redevelop it.