For Atlanta newbies, it can be difficult to explain how much different the Historic Fourth Ward Park area used to be, not all that long ago.

Yes, there were hip warehouse spaces and a couple of restaurants. Yes, The Masquerade complex (RIP) was legendary. Yes, it was immensely more affordable a decade ago. But beyond that, the district was pockmarked with weedy parking lots, shuttered industrial buildings, an abandoned railroad line, and illegal dumping sites—all the makings of an urban hellhole.

Today, the northeastern corner of Old Fourth Ward, like much of the neighborhood, is beset with complex pressures involving cost of living and displacement. But there’s no arguing the place teems with life. And by all indications—like so many construction cranes, twirling in the skies—it’s just getting started. 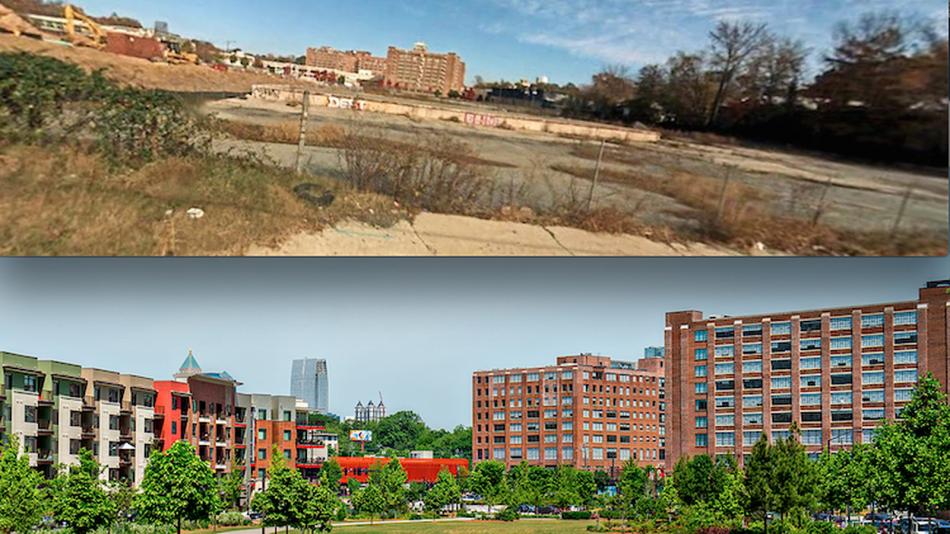 Before: The barren conditions of the post-industrial land where Historic Fourth Ward Park now exists, with PCM's largely empty building in the distance; after: roughly the same angle as development hit hyper-speed in 2016. Before: Google Maps; after: Jonathan Phillips

Drivers of these eastside changes include the BeltLine’s ever-popular Eastside Trial, which turns a decade old this year, and Ponce City Market, the 2-million-square-foot, adaptive-reuse colossus. The park itself—created with a runoff-capturing pond that solved flooding issues that had bedeviled the area for decades—has become a centerpiece jewel, a haven for wedding photos, festivals, and picnics. Thousands of new apartments, hundreds of thousands of square feet of offices, and dozens of new restaurants have sprung up within a quick walk.

But enough with the talking. This week, with temperatures easing a bit and skies becoming September clear, we sent up a drone for a bird’s-eye view of enough O4W changes to make the neighborhood’s very name ironic. Head up to the gallery for our latest aerial tour of Atlanta.