It’s been about six weeks since Atlanta’s Department of City Planning implemented a three-block experiment on downtown’s signature street that officials have called “the beginning of a cultural shift” in terms of how intown public space is utilized.

We figured that was plenty of time for both drivers and non-drivers to get acclimated to the Peachtree Shared Demonstration Project. So we conducted a two-part, highly anecdotal and limited test of our own to find out.

Building on an Atlanta City Studio concept from 2018, the initiative installed small removable barriers and verdant planters to open up street lanes for pedestrians and bicyclists, spanning from Baker to Ellis streets, in front of marquee hotels and numerous restaurants and office towers. It’s like a more civilized cousin to Decatur’s multi-colored, controversial, and also temporary system of street planters.

So how’s this initial phase of Peachtree Street’s reimagining working out so far? 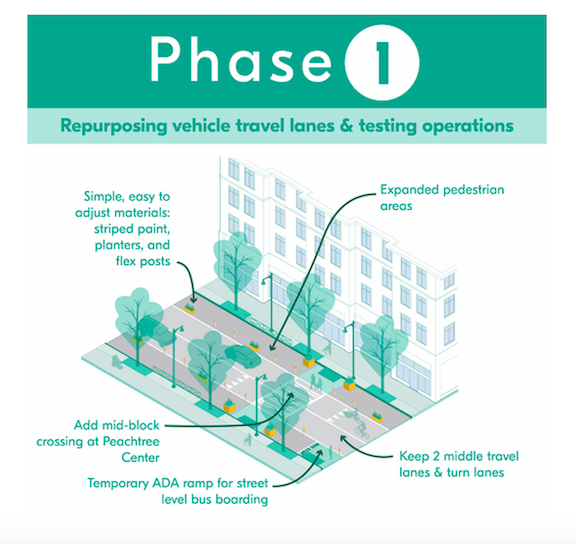 The scope of what was installed downtown in June as part of the Peachtree Shared Space study's initial phase. Department of City Planning; Atlanta Design Studio 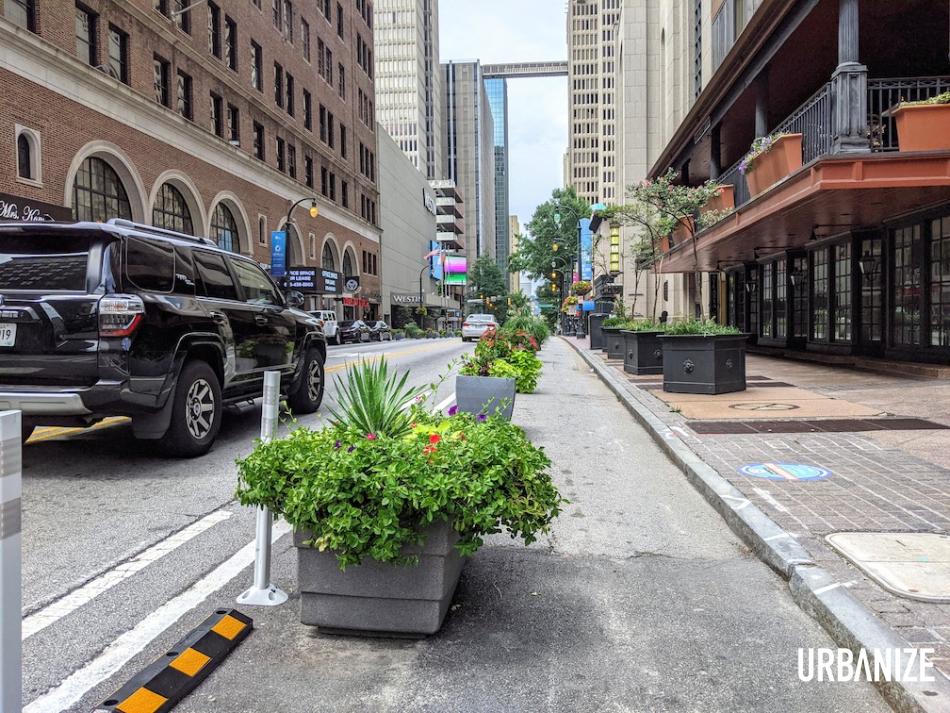 First, we drove along this skinner version of Peachtree (merely two lanes, in places) during the late afternoon on a weekday, just before rush hour.

Granted, the traffic load is decisively lighter than pre-pandemic times, but we didn’t notice anything resembling a vehicular log jam triggered by fewer lanes. The flow of cars on Peachtree was smooth and controlled, based on a limited sample. If anything, drivers seemed to go slower with so much in the street beyond just other vehicles.

We returned on a bike during a weekend afternoon. Aside from two e-scooter riders, no one else happened to be using the barricaded spaces, though people were everywhere downtown. Tourists gawked at lighted signage and tall buildings but seemed reticent to step off the curb into what used to be vehicle travel lanes.

Nonetheless, aside from the occasional gnarled, bumpy pavement, the experience traveling from the north blocks of downtown toward the south, and vice versa, was exponentially more pleasant than before.

The temporary project is very much a work-in-progress, and city staff say they’re monitoring the low-cost alterations to see how they perform—and to determine what aspects might be implemented into a final, curbless shared space.

The city is collecting input from the general public via this survey. Find background on the Peachtree Shared Space project here, and head to the gallery above to see how it all looks right now.