The almost century-old institution near Piedmont Park formerly known as Grady High School has a fresh face and name for the dawning school year.

Atlanta Public School’s Midtown High School and the city’s largest design firm, Cooper Carry, have unveiled a 63,000-square-foot, four-story addition to the campus that project leaders say improves functionality and acts as a new “front door” for students and employees.

Adjacent to the school’s historic section, the addition houses classrooms, indoor and outdoor lab space, a counseling suite, and a modern media center. It’s topped with a plaza on the roof, used for outdoor experiments and events.

Each classroom has a view of either Piedmont Park or the historic Charles Allen Building to the south, where the 1923 brick façade was also cleaned and repointed. Those two sections are now linked with a glass-enclosed courtyard.

“In our mission to balance the old with the new, we intentionally contrasted the architectural style of the new addition with that of the historic structure,” said Katy Daugharty, a Cooper Carry senior associate, in an announcement today. 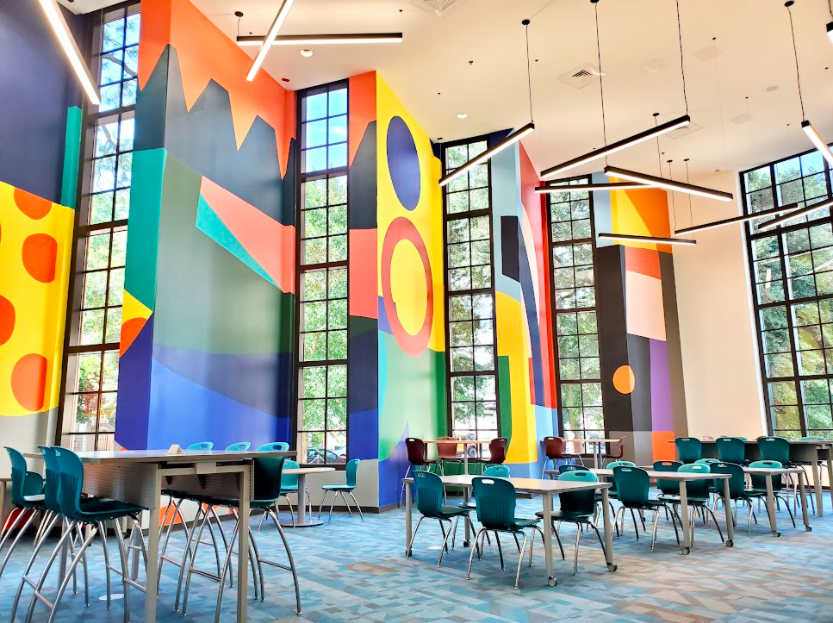 Two years ago, the proposed changes to the high school’s Charles Allen Drive frontage stirred controversy from advocates for alternate transportation, including students. They argued that paving the front lawn for surface parking was the wrong move—one that encouraged driving to school in an urban setting between the BeltLine and MARTA.

“To meet the needs of the school district and neighborhood, the front lawn of the school was carefully re-constructed to include a new porous paver entrance drive with visitor parking,” the architecture firm notes.

The school’s historic Charles Allen Building, which adjoins the addition, was designed by famed Atlanta architect Philip Trammel Shutze. His other landmarks include East Lake Golf Club and Buckhead’s the Swan House.

Have a look at Midtown High's juxtaposition of old and new in the gallery above.