After years of discussion and planning studies, the 80-year-old landscaped triangle that is downtown’s Hurt Park is getting a makeover.

Opened in 1940 and considered a feather in the cap of Atlanta Mayor William B. Hartsfield’s administration, Joel Hurt Park was heralded in its early years for a dazzling light show that lent a rainbow effect to the park fountain’s pressurized water spouts. A postcard from 1947 describes the fountain as “a sight of rare beauty by night when the sparkling jets of water are brilliantly illuminated.”

The park in more recent years had become a refuge for Atlanta’s homeless—until construction fences were erected in August 2020, barring public access. Talks of a Hurt Park makeover, with the possible addition of a performance stage, date back to at least 2016. 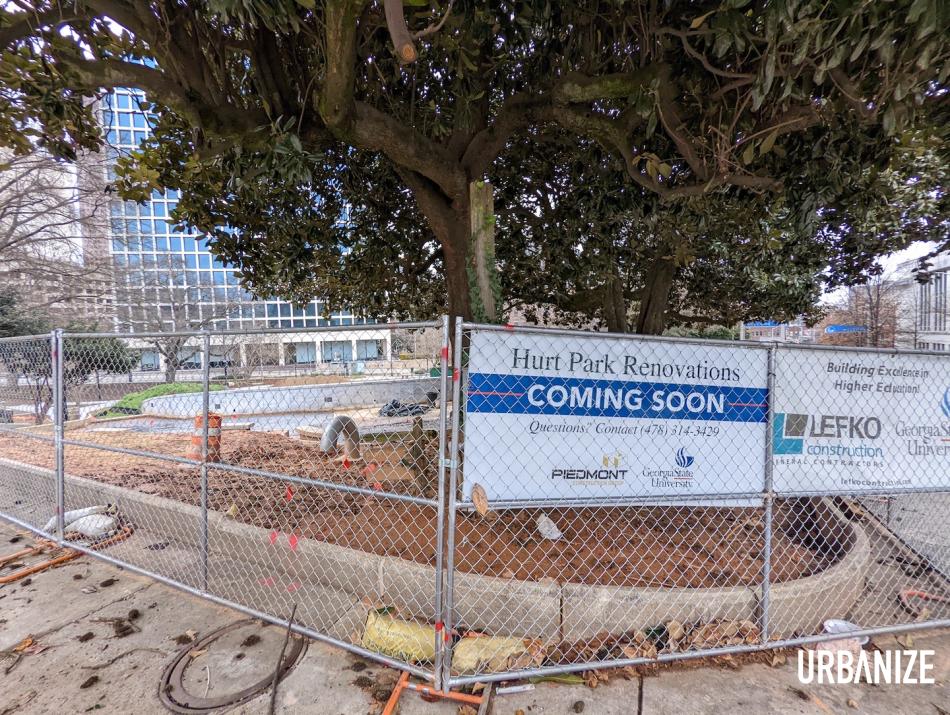 The City of Atlanta owns Hurt Park, but Georgia State University is responsible for maintaining the grounds and ensuring they’re safe, as the downtown campus surrounds the greenspace. Repeated inquiries to GSU and the city have lent no perspective on where the construction project stands or what its scope entails.

Revised seating, redone walkways, and repair work on the park’s centerpiece fountain all appear to be finished or underway now. Georgia State’s The Signal has reported that changes will also include increased security patrols once the park reopens.

The Hurt Park revitalization is part of a broader GSU master development that includes a new connective Greenway and the under-construction convocation center/basketball arena/concert venue in Summerhill. Head to the gallery for more context—and a look at where things stand today.