The pocket neighborhood, according to its creators, could serve as a model for residential development as metro Atlanta’s population continues to swell and available land becomes increasingly scarce.

Home sizes range from “micro-cottages” of just 250 square feet to a little less than 500 square feet. To encourage interaction between residents, a common greenspace with seating and a picnic table is at the center of the community. It also features climate-conscious aspects such as optional solar panels and edible, regenerative landscaping. A required monthly HOA fee of $100 covers common area maintenance and landscaping.

The site is a block from Clarkston’s downtown and about three blocks from the Stone Mountain PATH Trail that links to downtown Atlanta.

“When people see these homes, they’re shocked—they can’t believe the cottages are under 500 square feet,” Will Johnston, MicroLife Institute founder and CEO, said in a prepared statement. “That’s exactly the reaction we want. Every inch of this space was intentionally built to challenge our perception of space and make us reflect on how we can better utilize it.” 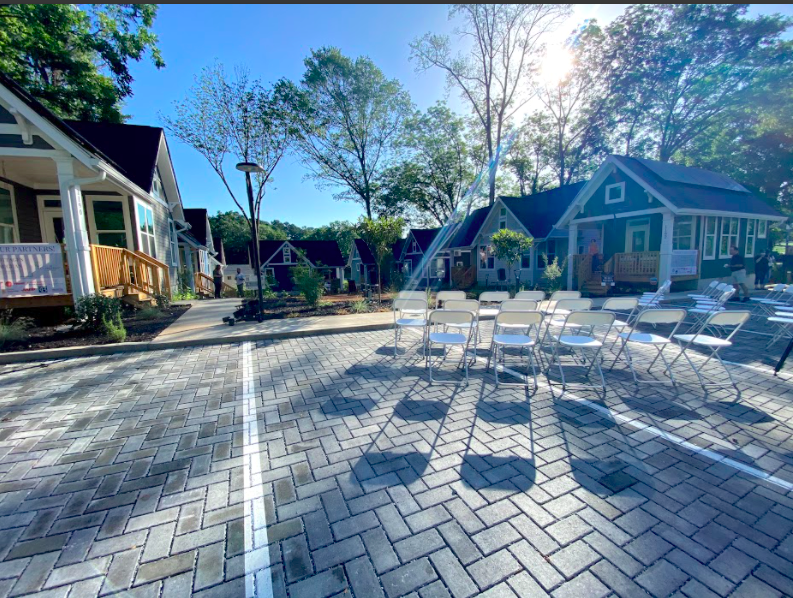 The finished community as seen this past weekend before its public unveiling. Courtesy of MicroLife Institute

Sales at Cottages on Vaughan ranged from $109,000 to over $200,000, with four buyers opting for $8,000 solar packages, Johnston tells Urbanize Atlanta. More than 1,500 people around the country had joined the project’s “interest list” after its May 2019 groundbreaking, officials say.

“The goal of this project was to get innovative with our development ordinances to allow for a greater diversity of housing options,” former Mayor Ted Terry, now a DeKalb County commissioner, said at a Saturday ribbon-cutting.

“We recognize that the past 50 years of urban sprawl has segregated communities, contributed to climate change, and exacerbated housing inequality,” Terry continued. “We can only start to address these challenges if we push the boundaries of what’s possible and start to rethink how we’re using space.”

One buyer, Rich Pasenow, said the concept quickly convinced him that tiny living was right for his lifestyle. He was among the first on the list of potential buyers and ultimately bought a 250-square-foot micro option.

“I embrace minimalism and was looking forward to being in a community of like-minded people,” Pasenow said. “I’ve been moved in for a little over a month, and the sense of togetherness is incredible. I have spoken to at least one of my neighbors every day.”

Information on upcoming public tours of Cottages on Vaughan, scheduled between August and October, is here. We previously published floorplans for homes that were available in March over here. Head to the gallery for a look at how these diminutive domiciles turned out.