A week after its deconstruction began, a shared-lanes project cheered by alternate transportation advocates but reviled by some powerful property owners is all but a memory.

Atlanta’s signature street, that is, has returned to its old self as a four-and five-lane road through downtown.

There are signs, however, that a more permanent conversion of Peachtree Street could eventually come.

Using planters, signage, wheel stops, and other elements, Atlanta’s planning department installed the Peachtree Shared Street Demonstration Project in June to restrict access to cars and open more public space to bicyclists, pedestrians, and others for three blocks, spanning from Ellis to Baker streets. The experiment, built on an Atlanta City Studio concept from 2018, was meant to signal “the beginning of a cultural shift” in terms of how intown public space is utilized, city planners said at the time. 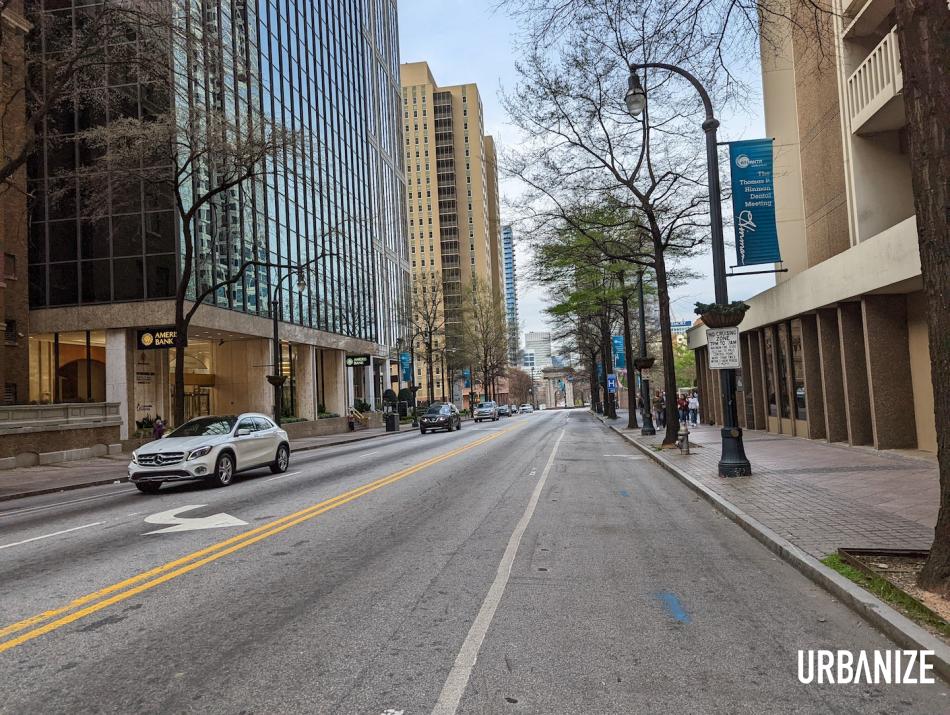 Despite avid support from the Atlanta Downtown Neighborhood Association, some developers, and owners of properties such as AmericasMart and Westin Peachtree Plaza, city leaders announced March 10 the shared streets initiative would be removed.

The city’s reasoning, as put forward in a press release, was that the pilot demonstration had run its course, lasting far longer than initially expected—more than 260 days, instead of 90—and producing valuable feedback and data that will be evaluated for future projects.

Advocates for the project believe a handful of detractors had outsized influence on eradicating the shared lanes.

That contingent includes Richard Bowers, president of commercial real estate firm Richard Bowers and Co., an owner of Peachtree Street office towers. Sources have indicated Bowers, who hasn’t responded to media inquiries, opposed the changes to Peachtree from the beginning and was influential in the city’s decision to remove shared lanes, threatening to drum up legislation that would stand in the way of shared streets across Georgia.

Atlanta Mayor Atlanta Dickens told Axios the possibility of state-level legislation that could hamper Atlanta’s efforts to create road diets and improve safety factored into the decision to remove Peachtree’s shared lanes. No such legislation was presented, however, the mayor specified. He also reiterated the fact the pilot program operated three times longer than initially expected and will be valuable for data assessment moving forward.

For shared streets proponents, however, not all hope is lost.

The Atlanta Regional Commission has approved a $1.5 million grant—mostly federal funds, with an additional $300,000 from the city—to help pay for engineer but not construction of a permanent shared street conversion of Peachtree lanes.

When asked by Urbanize Atlanta how those funds could come into play, an ARC spokesperson sent a timeline, as summarized below:

Atlanta Department of Transportation head Josh Rowan said during a transportation committee meeting last week that building out a permanent road transformation would cost between $4 and $5 million and take a few years, per AJC government reporter J.D. Capelouto.

Dozens of advocates gathered to protest the Peachtree shared lanes removal on March 14, the day before dismantling began.

For posterity’s sake, here’s a look at the shared space study once fully installed and in bloom last summer. Tour the same blocks of Peachtree Street today in the gallery above.