Sometime this month, Atlanta’s second-tallest skyscraper is expected to look different, with the flip of a switch.

This was brought to our attention in the form of a Letter to the Editor, as published below. It’s penned by an intown office dweller and industry observer who’s concerned the trend of crowning some of Atlanta’s best-known buildings with brightly lit signage is cluttering the city’s skies. 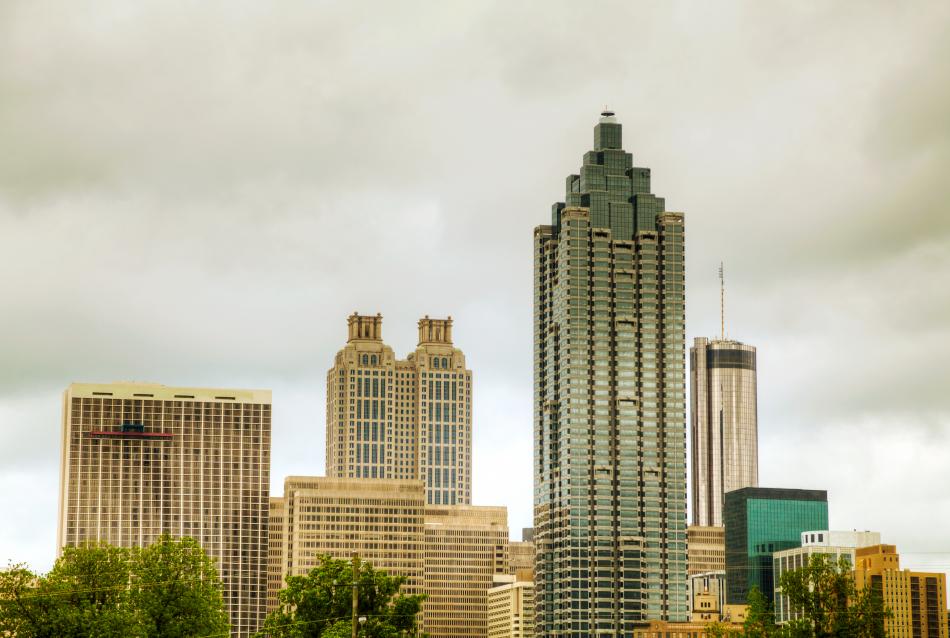 The tower’s principal tenant, Charlotte-based Truist Financial Corporation, is adding its name and logo atop what’s now called Truist Plaza as part of a broader transitioning of signage on its office buildings.

A Truist spokesperson tells Urbanize Atlanta new lettering atop the plaza will stand about 12 and ½ feet high, along with a taller 22-foot monogram. Barring delays, it's scheduled to be installed and switched on later this month.

Interior, façade, and street-level signage will be changed as well. 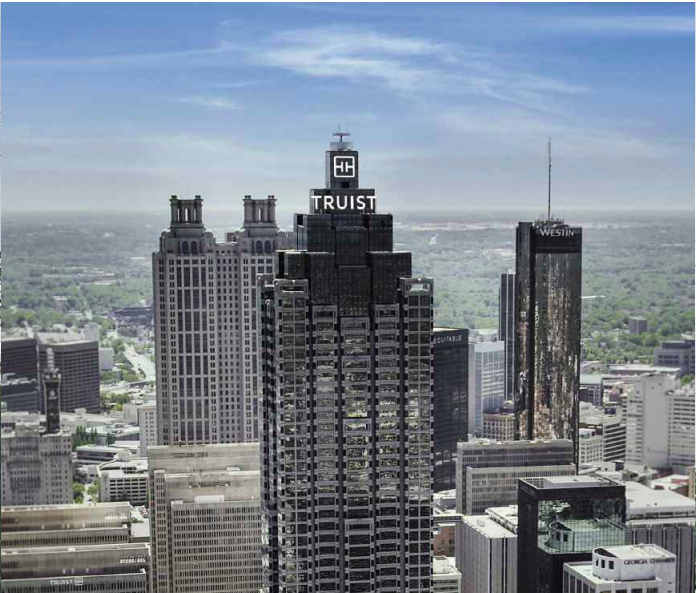 The company did share a statement that reads, in part, “We have a long history of serving and caring for our clients and this community, and it’s an honor to be a part of the iconic Atlanta skyline. Our hope is that our new Truist Plaza signs come to represent a symbol of something so much more—a purpose-led company committed to improving education, affordable housing, access to capital, and opportunity for everyone.”

John Portman IV, representing the plaza’s Portman Management and Leasing Co., added, “Although the name is new, Truist Plaza remains a beacon reflecting the dynamic history and promise of our region.” 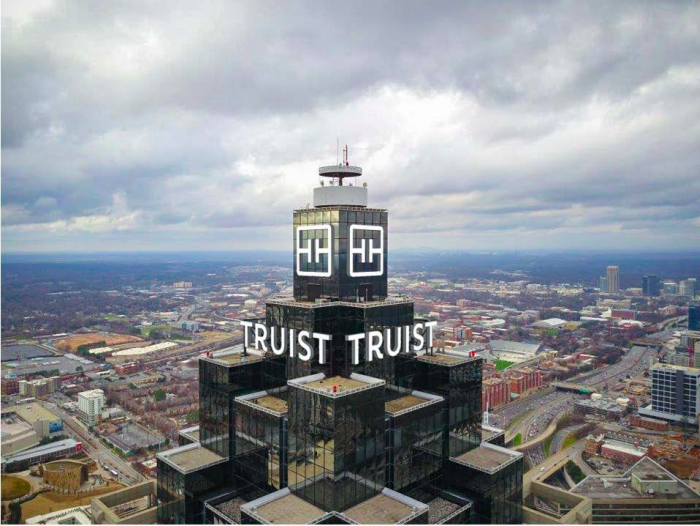 A rendering illustrating how the Truist name and a taller monogram would look atop the former SunTrust Plaza. Truist Financial Corporation; via Atlanta Office of Buildings

The letter’s author, however, sings a different tune. His writing is published below, with minor alterations for clarity and length. He asked to remain anonymous, so as not to negatively impact his company.

As some readers may have noticed, the top tiers of SunTrust Plaza's crown are currently covered in scaffolding. Those readers may be surprised to learn that this scaffolding is in place not for some routine maintenance, but to prepare for the installation of signs bearing the name and logo of building tenant and part-owner, Truist Bank. The signs were apparently permitted quietly in February.

This is yet another example of the ongoing arms race taking place at the top of the Atlanta skyline. Some notable Atlanta skyscrapers have always had building-top signage, such as the former AT&T Midtown Center in Midtown. Lately, however, these signs have become larger, more structurally permanent, and more visually dominant, to the point they actually overpower and diminish the architecture of the buildings they sit on.

This trend arguably began in 2018, when the owners of downtown's 100 Peachtree building removed that building's original "EQUITABLE" signage to install LED billboards that cover the entire crown on its north and south-facing sides. Many fans of the tower's minimalist 1960s aesthetic (a product of Skidmore Owings & Merrill, who also designed Chicago's Sears Tower around the same time) decried the change, which indisputably changed the building's appearance from one of restrained modernism to something more befitting the interior of a Carnival cruise ship. 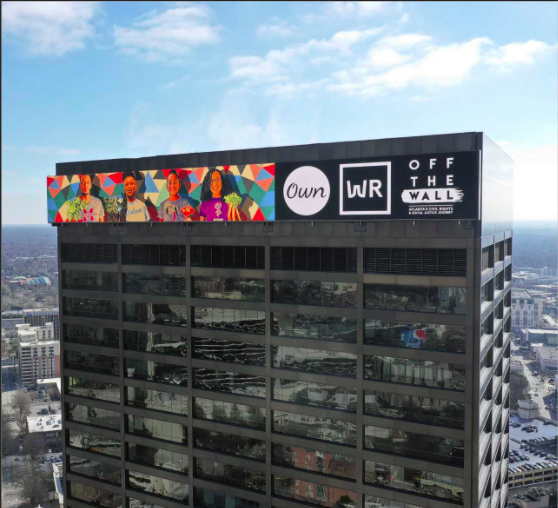 Where the former "EQUITABLE" signage peered across downtown for decades. Georgia's Own Credit Union; 2019

Less than a year later, King & Spalding, a conservative, white-shoe, corporate law firm which no ordinary person has ever heard of (or needs to), tossed its characteristic modesty aside to add a massive sign bearing its name to a formerly attractive Midtown building at 1180 Peachtree Street. That building’s celebrated architect, Jon Pickard, has understandably distanced himself from the signage, saying during a recent visit to Atlanta that the building no longer reflects his design intent.

Not all efforts to add building-top signage have gone so smoothly. For example, Cousins Properties was thwarted in its attempt to add 17-foot high signage to the crown of its Promenade II building in Midtown when its then-tenant, law firm Smith Gambrell & Russell, filed suit. In a subsequent arbitration with Cousins, SGR’s lawyers successfully argued that the terms of its lease gave it veto power over any “substantial addition or alteration” of the building’s exterior, including signage on the building’s top floors. Now that SGR has moved to new offices elsewhere in Midtown, I worry that Cousins may decide to resume its signage battle at Promenade with less powerful tenants who remain there.

Although news of the Truist signs may come as a shock to Atlantans, this is not the first time the newly renamed bank has significantly altered one of its own buildings in pursuit of brand awareness.

At its new headquarters in the Hearst Tower in Charlotte, it attracted howls of protest from everyone with eyes when it hung gargantuan “Truist” signage from the top of that Art Deco-inspired tower. (See this Charlotte Observer article). 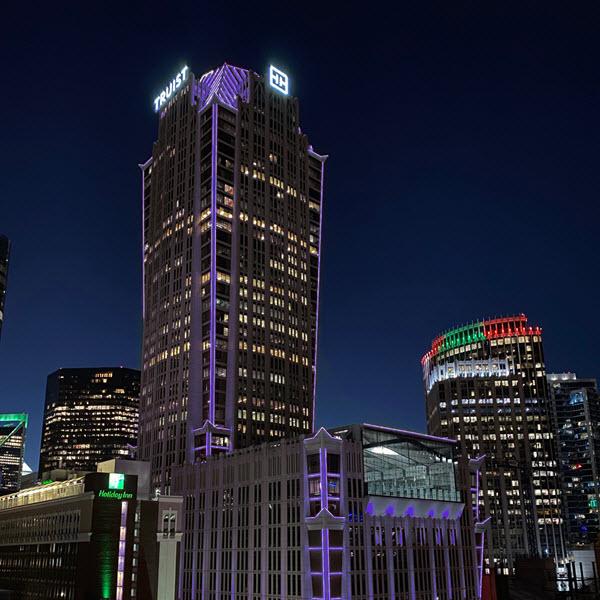 If SunTrust Plaza’s signs are at all similar to the ones in Charlotte, they will forever change the look of the second-tallest building in Atlanta. John Portman’s last major skyscraper design in his hometown, no less.

Other large cities in the United States, including Houston and New York, have strict regulations on such signage. Houston does not permit any building-top signage at all, and New York generally prohibits them unless they replace existing signage predating the city's regulations.

By contrast, Atlanta appears to allow pretty much any signage building owners ask for.

In light of the recent proliferation of massive signs atop Atlanta's most recognizable buildings, perhaps it's time for the city to change its approach and establish strict standards regulating the size and permanence of such signs.

Failing that, no one should be surprised if 2022 brings news of LED billboards being hoisted to the top of Bank of America Plaza.