Could not retrieve the oEmbed resource.

After Alpharetta’s Planning Commission requested significant changes to a proposed overhaul of North Point Mall this month, the Texas-based developer hired to do the job says it remains committed to building a “verdant gathering place for the community to live, work, and play” from what’s largely seas of parking lots today.

And they’re pointing to a vivid fly-through video that illustrates exactly what they have in mind.

The three-minute promotional clip provides a breakdown of the redevelopment’s three proposed zones: the residential Neighborhood, The Village social hub, and the largest section, The Station, where commercial activity would be centered. Those would be woven around 874,000 square feet of “legacy retail” standing at the 1990s mall today. As the animation shows, a mishmash of The Battery Atlanta, Lenox Square, and even Serenbe comes to mind. 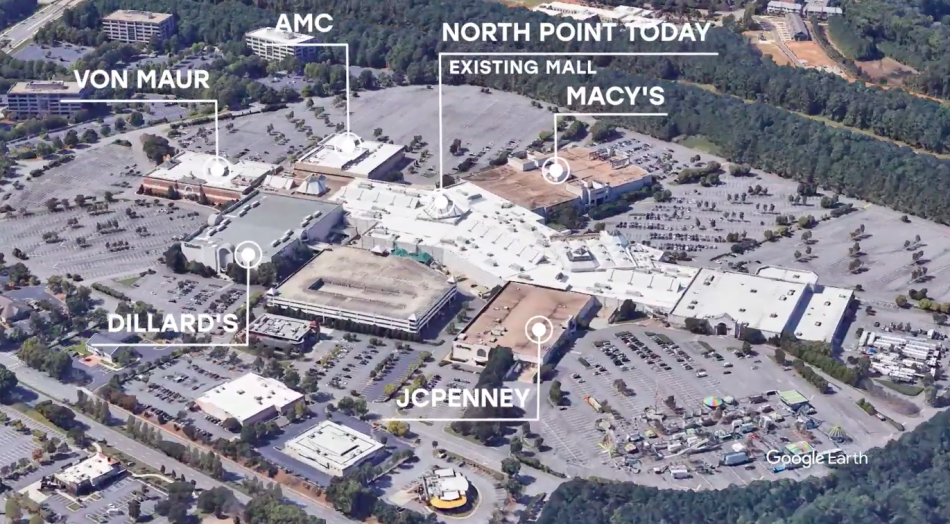 Trademark Property Company reps provided a statement saying the firm is uniquely qualified to tackle “the complex mall repositioning” alongside mixed-use development that plans call for, given their three decades of experience in retail transformations. Past projects in a similar vein include Victory Park in Dallas, Zona Rosa in Kansas City, and elsewhere in Texas, Market Street Woodlands in The Woodlands, and Watters Creek in Allen.

The goal, say Trademark officials, is to “make North Point a national model for mixed-use redevelopment.”

“We very much appreciate the spirit of collaboration with the City of Alpharetta,” reads a company statement provided to Urbanize Atlanta. “We’re studying the requests of the Planning Commission and look forward to working together to bring the reimagined North Point experience to the community.”

Earlier this month, Alpharetta’s Planning Commission asked for modifications to Trademark’s $500-million development plans instead of green-lighting them and forwarding a recommendation to city council.

The commission deferred its vote to a meeting in early August and asked Trademark to return with changes to its plans for remaking 83 acres of the property. Specifically, commissioners asked to see a grocery store included in the mix, 5,000 square feet of conference space in a planned hotel, and in the short term, more for-sale homes instead of apartments. (As proposed, the project is expected to produce 900 rentals across three phases and 36 for-sale townhomes, mostly built upon today’s surface parking.)

Trademark officials have said they hope to open the first phase—320 apartments with a village-style spread of retail and restaurants around an event plaza and large greenspace—in time for the 2025 Christmas shopping season. The full redevelopment, however, could take a decade.

Take an immersive, visual trip through how that could look and function in the video above.