An A-lister-grade restaurant and hotel combo in Buckhead with Robert De Niro’s stamp of approval is officially open for business.

Five years after plans for a Nobu concept were announced at Phipps Plaza, the global luxury brand debuted this week on a transformed section of the property that had been a Belk department store.

Designed by The Rockwell Group, the brand’s first foray into Atlanta includes a 152-room, upscale hotel with a rooftop pool, spa, and conference space, plus the 10,000-square-foot Nobu Atlanta Restaurant, which is dishing Japanese cuisine widely considered iconic. Acting legend De Niro is co-owner of the restaurant chain. [CLARIFICATION, 2:57 p.m. Dec. 5: Rockwell Group served as interior architect and designed the interiors of the hotel while The Beck Group designed the exterior of the building and served as the architect of record for the interiors and built the building.]

Rates this month start at $395 nightly—and quickly escalate from there.

Located on the north side of Phipps Plaza along Phipps Boulevard, Nobu joins a new central greenspace and two more mid-rise buildings in Belk’s footprint: 13-story One Phipps Plaza offices and a Life Time fitness resort with a 25,000-square-foot, membership-based office and workspace component.

At Nobu’s ribbon-cutting Wednesday, Nobu Hospitality CEO Trevor Horwell and chief operating officer Struan McKenzie told Bisnow that Atlanta had long been on the company’s radar, but the city’s transformation over the past decade with film and TV production, a burgeoning music industry, office development, manufacturing, and sports made the time right to move forward. Ditto for the location opportunity at Phipps.

More recent worries about Buckhead crime, talk of seceding from Atlanta, and the rise of Midtown as the city’s office-development and leasing epicenter are not pressing concerns, the executives told Bisnow Atlanta. 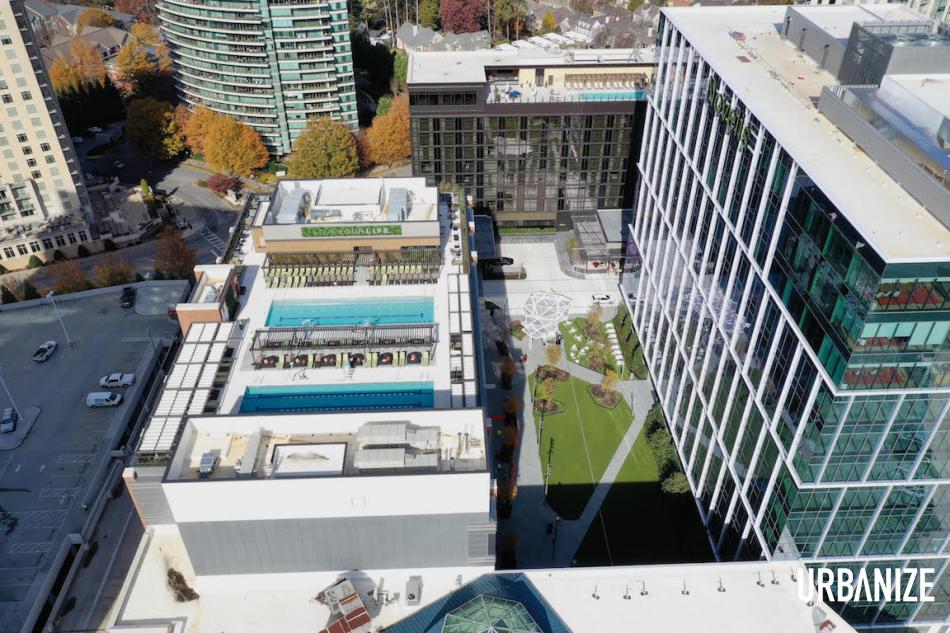 The hotel (at top) and its proximity to a central greenspace at the Phipps expansion. Life Time's rooftop beach club is shown at left, crowning the fitness component and Life Time Work offices.

The Phipps expansion will also include an upscale food concept called the Citizens Culinary Market. That 24,000-square-foot piece, a collaboration between Simon Malls and Sam Nazarian’s C3, will use a ghost kitchen model to offer sit-down dining and pick-up meals. Some of C3’s popular brands—Umami Burger, Krispy Rice, Sam’s Crispy Chicken, and others—are in the pipeline, officials have said.

In the gallery above, have a peek at Nobu accommodations and see how the hotel  fits with the rest of the overhauled mall property.