How one of the oldest names in Atlanta development plans to transform nearly a full Midtown block is coming into clearer focus.

Portman Holdings representatives shared a new promotional video with Urbanize Atlanta today showing what’s described—atop a jazzy background score—as “a hospitality-forward working environment of the future… which blurs the line between productivity and your favorite ways to unwind.” 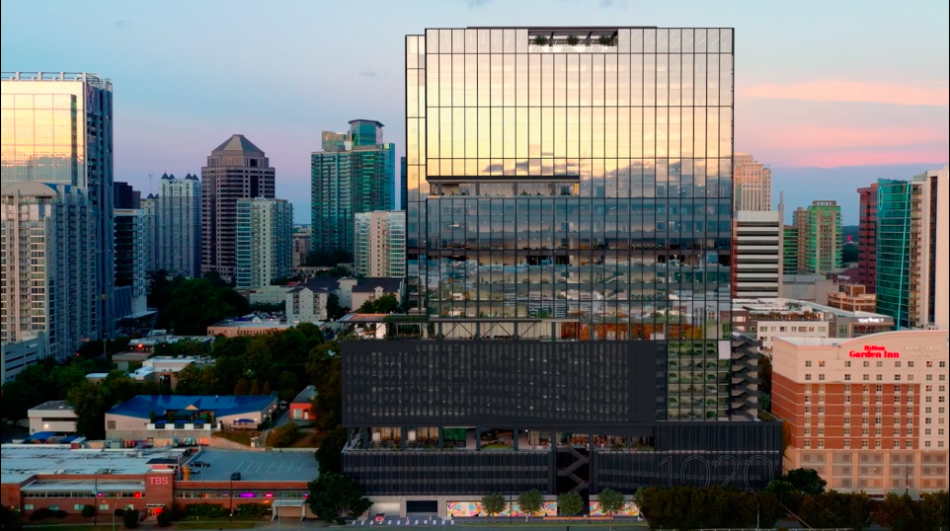 Internally, the building is expected to include an 11-story parking garage—four levels underground, seven above—with some 936 parking spaces, for a ratio of 1.8 spaces per 1,000 square feet of offices. To the chagrin of transit-loving urbanists across Atlanta, development officials note that “[p]arking in Midtown is a scarce commodity and is expected to be met with strong demand, as the garage will serve to generate additional income while providing event and transient parking.”

Elsewhere in the KPF-designed building, plans call for what might be Atlanta’s first new indoor pickleball court next to the indoor-outdoor fitness center, a lobby café, terraces and balconies on each floor, and an airy coworking space adjacent to a rooftop bar. Office spaces call for ceiling heights over 13 feet and floor-to-ceiling windows for maximizing skyline views.

A plaza on the ground floor would feature a moss garden next to the café and what’s described as a “historic north garden” for guests. The office building would be constructed next to the nearly century-old Spring Hill Mortuary (H.M. Patterson House), a Philip Trammell Shutze-designed landmark that officials say will be adaptively reused and woven into redevelopment plans. 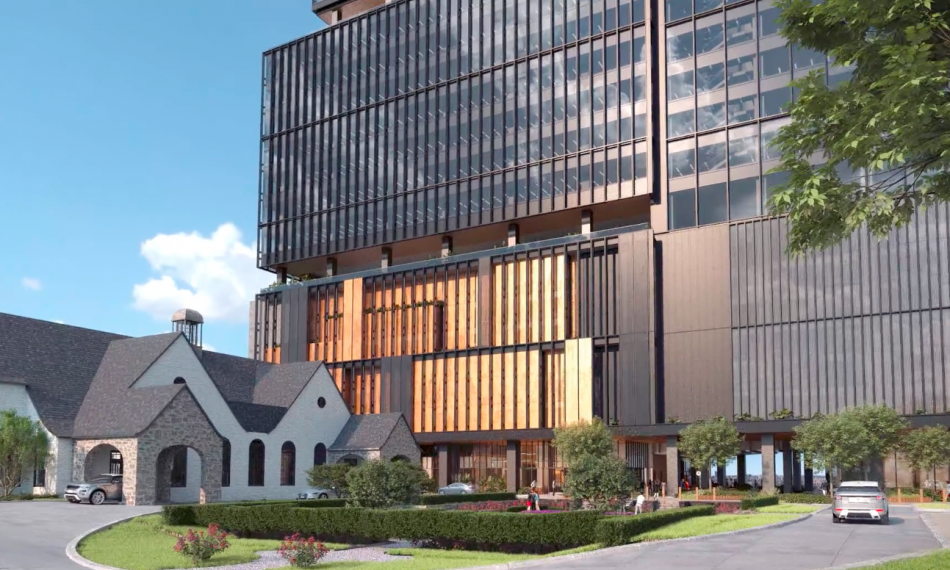 Plans for the base floors of the office building with the historic, adaptively reused mortuary next door. Courtesy of Portman Holdings; 1020 Spring/Vimeo; designs by KPF; architect of record, HKS

We’ve asked for an updated timeline on when Portman’s 1020 Spring office component might break ground, and we’ll update this story with any additional info.

Overall, the site spans more than 4 acres, and 1020 Spring is one new building of three planned to rise there.

In August, Portman Residential, a new real estate development affiliate of Portman Holdings, broke ground on the 370-unit apartment project 1000 Spring. That building will climb about 26 stories on one of Midtown’s highest points, formerly a parking lot at the northwest corner of Spring and 10th streets.

A 225-key hotel is also in the mix, next to the office tower along Spring Street, along with “carefully curated street-level retailers.” Get up to speed in the gallery above.