Out with the Frappuccinos—and in with the chihuahuas.

On a gritty corner of Boulevard where Starbucks bailed on plans for a drive-thru bistro, a popular Atlanta dog-boarding business is moving forward with an adaptive-reuse project that would render the property unrecognizable.

The business plans to build a 5,500-square-foot addition to a vacant building at the northeast corner of two busy intown corridors, Boulevard and North Avenue. [UPDATE: 12:04 a.m., November 22: The dog daycare business' name has been removed from this story after a conversation Monday with a business leader; publishing the business' name could cause harm to current lease agreements, we're told.]

The result would be a modern-style, 9,000-square-foot structure beneath a butterfly roof, as drawn up by Decatur-based architecture firm Office of Design. 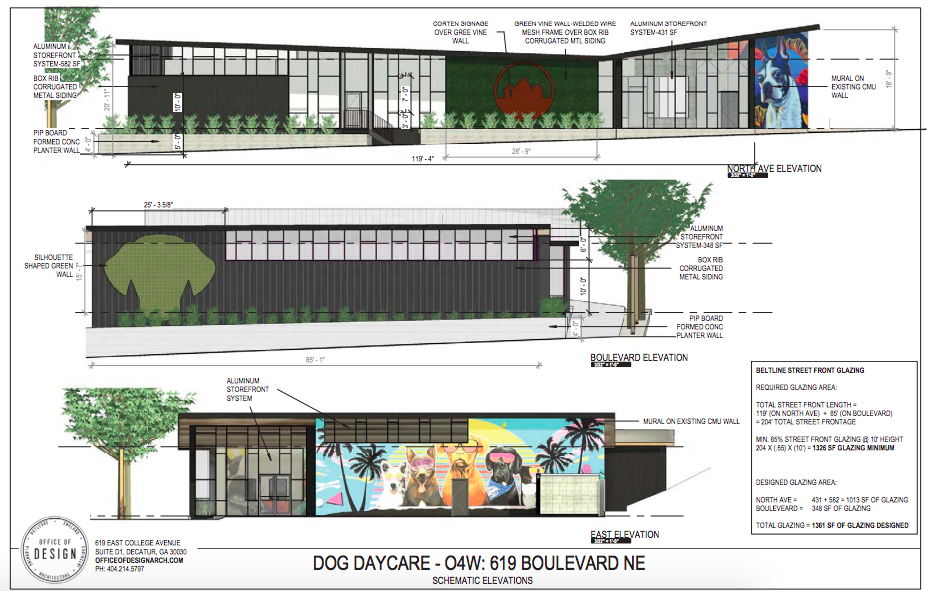 Plans for the three public-facing elevations. Office of Design

On parts of the steel-and-glass façade along both streets, plans call for green walls covered in fig ivy, while other walls would feature dog murals “to create a vitality and playfulness in keeping with the nature of the building’s use,” according to paperwork filed with Atlanta’s Office of Zoning and Development.

The business' plans for the 619 Boulevard property have completed the BeltLine’s Special Administrative Permit process, according to NPU-M zoning representative Ross Wallace.

The business is now seeking a zoning variance to reduce the total parking requirement on site from 21 to 15 spaces. A Board of Zoning Adjustment hearing on that matter is scheduled for Dec. 1.

The Starbucks would have replaced the shuttered medical facility and an empty 1940s home next door. The boarding facility's plans don’t include the residential structure. 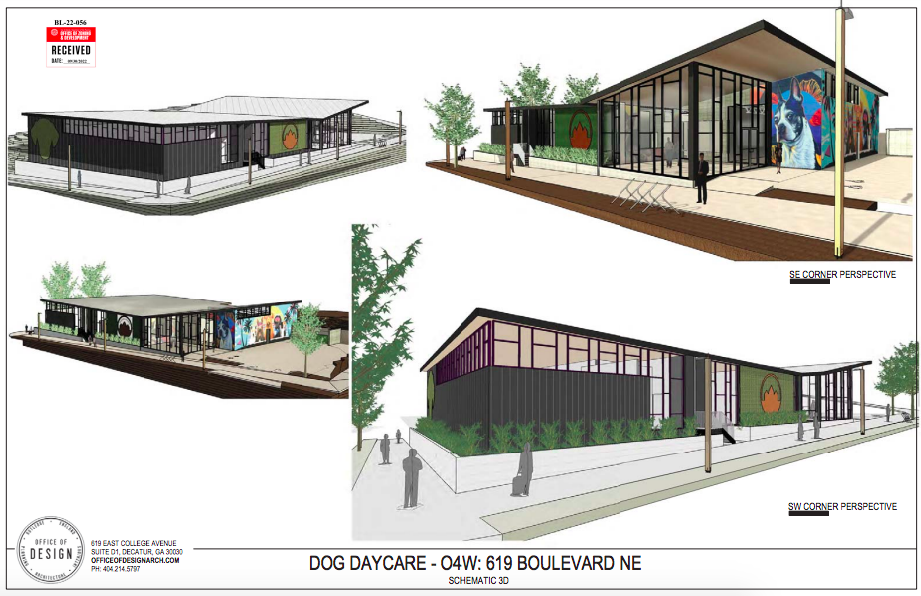 Starbucks had been eyeing property to build a ground-up new bistro on the corner for well over a year. Plans that came to light in October 2021 promised a 2,500-square-foot building positioned close to the intersection’s sidewalks, with a specialized, snaking drive-thru behind it.

The site is less than three blocks from Ponce City Market and the BeltLine’s doggy-haven Eastside Trail, just up the street from upscale rental complex Novel O4W. Thousands of apartments have materialized in the neighborhood across the past decade, exponentially increasing O4W’s dog population, too.

Find more images and context in the gallery above.