An industrial zone near the BeltLine’s Westside Trail stands to have a distinctly more residential feel if development plans are granted permission to move forward.

Woodfield Acquisitions hopes to build 300 apartments and 25 townhomes on a 7-acre Oakland City site about a block west of the paved BeltLine, adjacent to the historic Murphy Crossing property.

The area has been closely watched in recent years after Atlanta BeltLine Inc. purchased the last available parcels at 20-acre Murphy Crossing as a palette for redevelopment in 2018. In April, the BeltLine issued a request for proposals from developers for Murphy Crossing—formerly the Georgia Farmers Market, with about a dozen warehouses and other buildings on site—and the procurement process continues.

Immediately south of Murphy Crossing, Woodfield’s site is considered grayfield today, housing two small, dilapidated buildings, according to a rezoning application filed with the city last week. Plans call for a BeltLine spur trail to run along the southern edge of the property, linking the Westside Trail to a planned redevelopment of the Cut Rate Box buildings.

The Oakland City site as of February 2020. Google Maps

Woodfield wants the property rezoned from a light industrial to multifamily residential district, allowing for high-density housing. Alongside the 25 townhomes, apartments would be housed in three buildings—two of them four stories, the other three, per the rezoning application.

“The project will activate this currently disinvested area,” applicants noted, “serve the city with a supply of needed new housing stock, and stitch together the neighborhood by providing a publicly accessible pedestrian connection to the BeltLine spur trail.”

Woodfield expects the project to be completed in December 2024, with marketing beginning in July that year.

Plans call for homes ranging from 652-square-foot studios to 1,632-square-foot townhouses with three bedrooms, though the vast majority (85 percent) would be one and two-bedroom flats.

To comply with inclusionary zoning, however, 15 percent of units will be reserved as affordable housing, capped at 80 percent of the area median income, according to the rezoning application.

Amenities will include a pool, gym, and clubhouse, per developers. 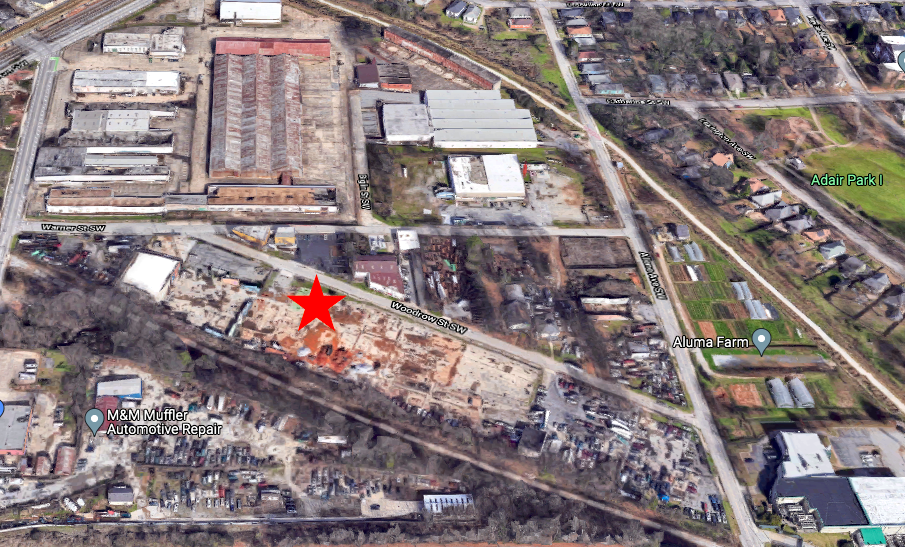 The acreage in question at 840 Woodrow Street, with the BeltLine's Westside Trail and Adair Park at right. An aerial overview of a development industrial site in Atlanta.

Developers hope to enter the project into the Georgia Brownfield Program, which helps fund cleanup of contaminated sites with federal grants, after an initial analysis “flagged recognized environmental conditions on the property from historical uses.”

Multifamily developer Vida Companies is a partner in the deal, according to the paperwork.

UPDATE, 2:17 p.m., January 13: Vida's Joe Martinez sends the project rendering featured above and adds, via email: "Over the next couple of months we will be working together with the neighborhoods of Oakland City, Capitol View, and Adair Park to craft this project and incorporate their feedback in the design and program. We can share next steps in the late spring."