A mini-park project under construction in Midtown is continuing a surprising trend spotted recently across the city: the subtraction of vehicle lanes in favor of pedestrian-friendly green zones.

The concept was put together by Midtown Alliance and the city’s Department of City Planning and Community Development, who alongside neighborhood stakeholders hosted several public meetings to determine how the block might be enhanced.

The problem before: Sidewalk tables and chairs for the circa-1923 Commercial Row’s businesses—namely Savi Provisions market, Cafe Agora, and Arden’s Garden—were impeding pedestrian access on the important corridor between Peachtree Street and the Midtown MARTA station.

The new plaza, as project supporters envision it, will create “an unobstructed pathway for pedestrians” and a “dedicated and relaxed space” where café patrons will be able to see and appreciate “the unique historic and cultural identity of the landmark Commercial Row buildings,” according to Midtown Alliance.

In the 1970s and 1980s, the intersection housed what many considered the city’s finest boutique dress shop, in addition to popular restaurants.

Midtown Improvement District has provided $1.26 million for the project's design and construction.

In addition to the open plaza, changes will include a widened sidewalk on the south side of Peachtree Place and buried overhead utilities; removal of on-street parking spaces on both the north and south sides of the block; an improved alignment of the intersection with Peachtree Street; fresh art in the plaza; and landscaping enhancements to include a new planted media. Two-way traffic on Peachtree Place will be maintained.

The City of Atlanta granted a 90-day road closure permit for the project to be completed, beginning in early September. 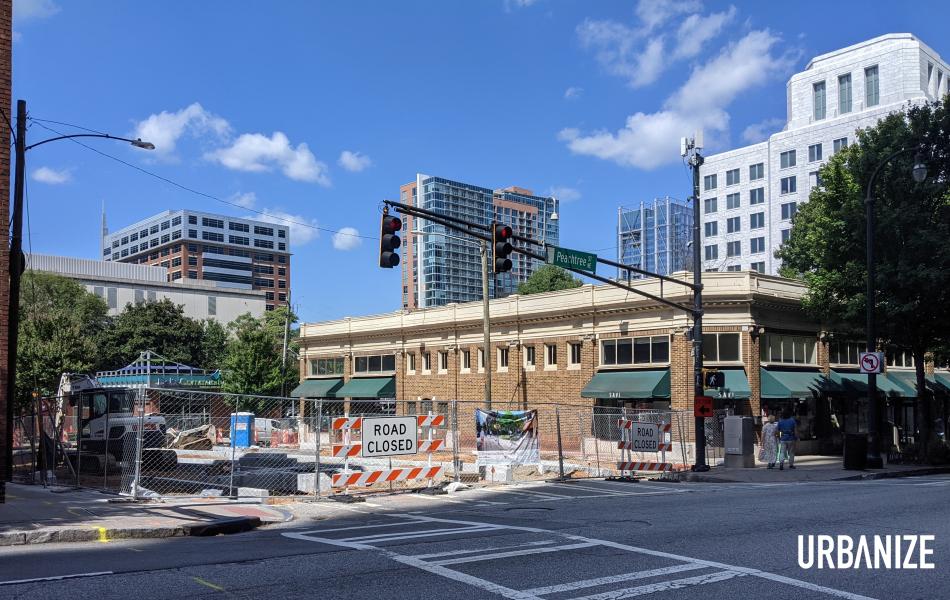 In removing vehicle infrastructure for the benefit of pedestrians, the Midtown initiative echoes downtown’s Peachtree Shared Demonstration Project, where planters have recently made two lanes off-limits to cars for three blocks.

In the same vein, the Atlanta BeltLine’s concrete planters and safety barriers in Glenwood Park converted a section of Bill Kennedy Way into the interim Southside Trail earlier this year.