A more functional and esthetically engaging transformation for one of Midtown’s most prominent corners is set to begin this month.

Midtown Alliance officials say the 10th Street Temporary Park project will start construction in July as a means of providing the district more outdoor amenities in a space that’s hosted holiday décor, lawn games, public art, and seating throughout the years but little else.

At the northeast corner of Peachtree Street’s intersection with 10th Street, plans call for installing three “outdoor rooms”—one with a fenced dog park, one with games such as ping-pong and cornhole, and another with a climbable structure. 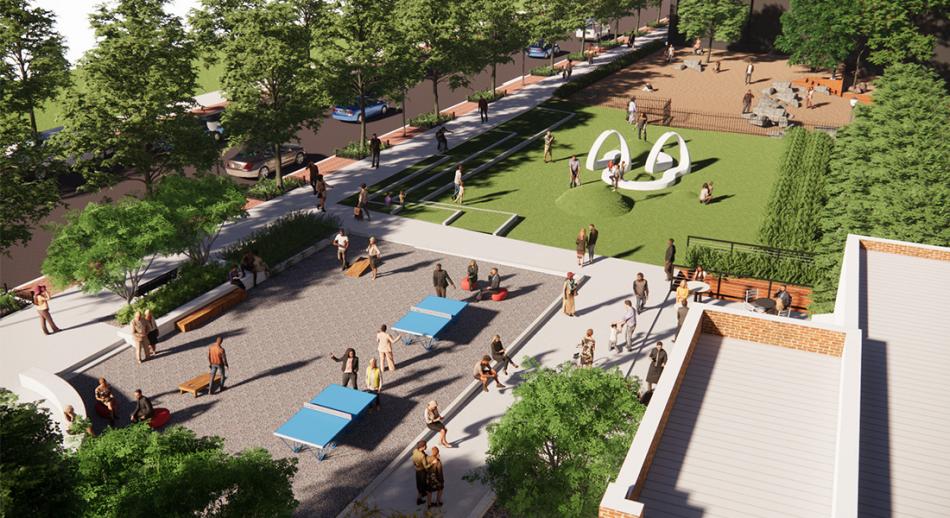 Of nearly 5,000 respondents to the Midtown Community Survey three years ago, 95 percent said small parks and plazas in the neighborhood should be a priority.

“We’ve all seen that functional outdoor spaces have taken on increased importance over the last two years,” Kevin Green, Midtown Alliance president and CEO, said in a recent project announcement. “[These] spaces will be even more important as Midtown continues to come back to full strength.”

More artistic changes to the greenspace will include a mural by artist Jasmine Nicole Williams on a building at the north end of the park. Williams plans to begin painting this month, per Midtown Alliance.

In the middle of the park, sculptural seating with LED lighting that changes colors, as designed by Fabio Novembre for Vondom, will be installed.

At the corner, the popular, leased Autoeater sculpture was replaced in November by a rock-paper-scissors installation called “Conversation Peace” by Kevin Box.

Construction of the temporary park was knocked off schedule by a sinkhole that had begun swallowing the lawn and required repairs by the city, officials have said. Midtown Alliance leases the space—planned to be redeveloped, eventually—from controversial landholder Dewberry Capital for $1 per year.

John Dewberry, head of Dewberry Capital and affiliated businesses, bought the block in question in the late 1990s. 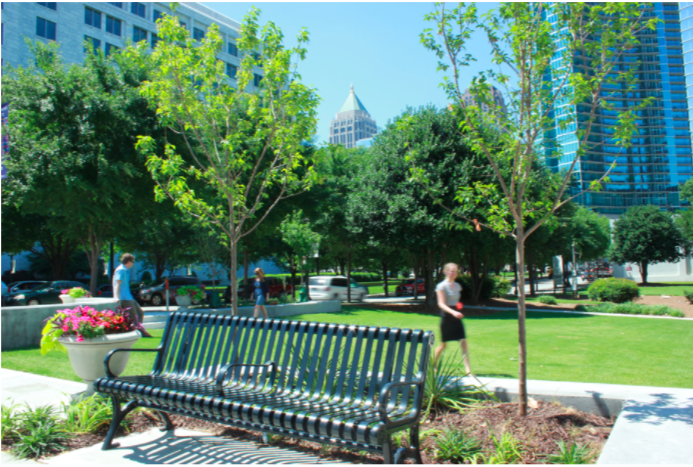 “We’re delighted to see the property used to create this pocket park for the pure enjoyment of both Atlanta’s citizens and visitors alike,” Jaimie Brown Dewberry, the foundation’s director, said in the announcement this month.

The pocket park isn’t the only project within a couple blocks that could boost Midtown’s vibrancy despite relatively small scales.

Next door to the east, plans call for a standalone restaurant and former market building to be converted to Asian concept Stix, with rooftop seating and a bar.

In January, construction began on the Midtown Alliance-led expansion of Art Walk from 10th Street north along Peachtree Walk. That $4.5-million project is converting the space into a more inviting promenade with new seating areas, landscapes, and murals.

A block from the Art Walk, another pocket park called Commercial Row Commons where Peachtree Street meets Peachtree Place is expected to open to the public in the next few weeks. That plaza has recently seen sculptures installed with almost 200 birds and another formed with the shapes of oversized shoes.