Designs for a new 30-story Midtown office tower call for a building that reflects the curves of 10th Street and brandishes a distinctive, fin-like glass façade to the west, according to a Tuesday presentation before the Midtown Development Review Committee.

Notably, the Trammell Crow Company proposal would also transform a one-block section of Crescent Avenue from a two-way street into a one-way, plaza-like corridor where pedestrians would share space with vehicles, per architects.

Called Stratus Midtown, the building is planned to rise at 80 Peachtree Place NE, a parcel currently occupied by Delta Community Credit Union and its parking lot. The site is across Crescent Avenue from the Margaret Mitchell House, a few yards from the Midtown MARTA station. 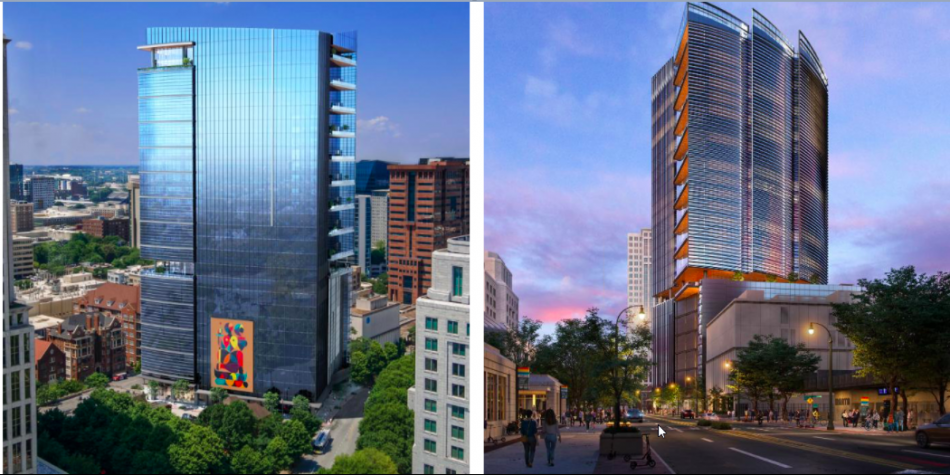 In a sign that developers are bullish on Midtown’s office market bouncing back from the pandemic, the project would be comprised almost completely of office space—465,000 square feet—apart from roughly 8,900 square feet of retail at street level.

Trammell Crow, a national developer with projects dotted around the city, is working with the Atlanta History Center to modify Crescent Avenue into a pedestrian-friendly, shared street linking with the Margaret Mitchell House’s garden spaces. That would join with a pocket park fronting retail that’s currently being built around the corner.

The new plaza, per Tuesday’s presentation, would be built of pavers in a way Duda Paine and HGOR architects feel would slow traffic.

Above the plaza, on the building’s eastern face, a towering mural is in the works, though discussions with potential artists have yet to begin. 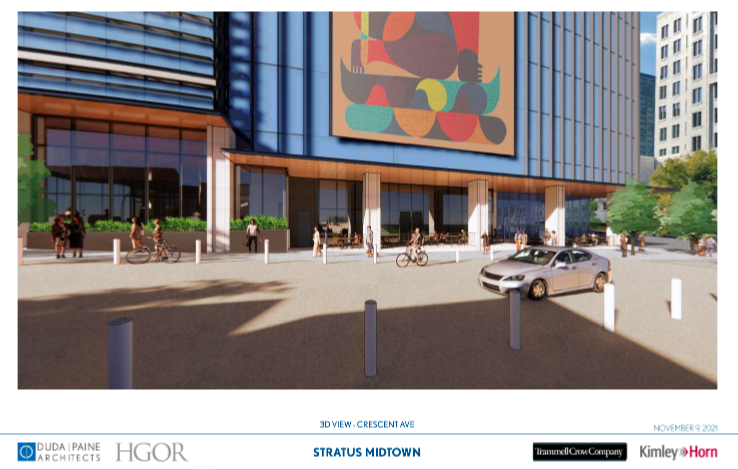 The bulk of retail space would front the 10th Street corner, but architects are working to include as much active space as possible along Peachtree Place, likely with a café, per the presentation.

Trammell Crow’s tower would also include a 13-story, enclosed parking podium with 828 spaces, with entries from both Peachtree Place and 10th Street, according to preliminary plans.

The Midtown DRC provides formal recommendations on development proposals to city staff, prior to the building permit stage. Deadline constraints prohibited our attending the end of Tuesday’s meeting, but we’ll update this story with the DRC’s recommendations once they’re released today.

For now, have a closer look at Stratus Midtown—and its big ideas for street-level alterations—in the gallery above.

Next Steps: The committee requested that the applicant provide updated plans at a follow-up presentation at the next regularly scheduled DRC meeting.