Fans of midcentury-modern renovations that don’t bastardize what made the genre special in the first place could find much to admire around this unique neighborhood in the shadow of Spaghetti Junction.

Priced at $595,000, the latest Northcrest midcentury dwelling to come to market is being called an authentically restored reimagining of one of the community’s most desirable floorplans—an atomic ranch with 1960s soul and 2022 features, that is.

In this case, that price buys four bedrooms and three full baths in 2,640 square feet, with amenities called 100 percent modernized. Renovations have just recently wrapped up. 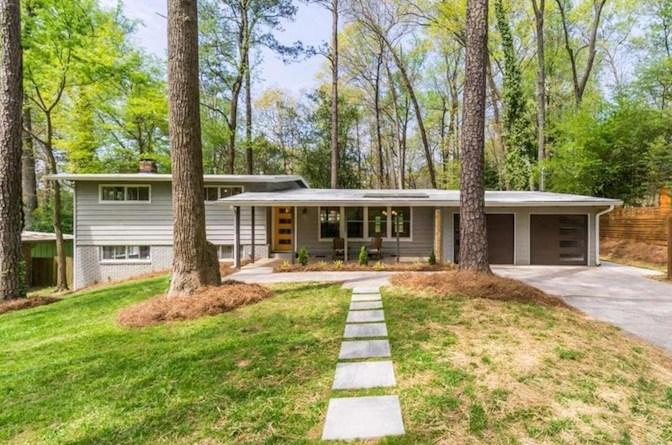 The revised facade at 3432 Northlake Trail, with what's described as a rare enclosed garage for Northcrest, a swim-tennis community in Doraville. Photography by Henry Kim; courtesy of Clickit Realty

It’s the priciest standalone house in the area (without a contract) but does represent a cheaper option than homes of comparable size across many intown Atlanta neighborhoods.

According to marketing materials, unique perks at the 1963 property begin with a Northcrest rarity: an enclosed garage, with space for two cars. (Google imagery indicates that space was previously another room with a separate entrance.)

Inside, find a bounty of heart-of-pine, tongue-and-groove ceilings and fully redone bathrooms and a kitchen with marble countertops. Interesting fact: the lighting fixtures, described as genuine reproductions accurate to the period, were bought from a movie-set prop company. 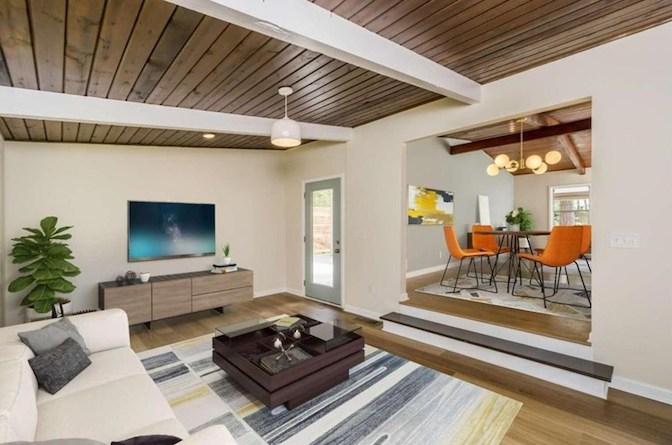 This sunroom off the dining space has access to two outdoor "retreats," a large back deck and fenced-in side patio, per the listing. Photography by Henry Kim; courtesy of Clickit Realty

Bonus points for the floating stairs leading to a second living quarters downstairs (with fireplace), the roomy full laundry room, and two car-charger outlets. Everything from the roof to the plumbing is also new, per the listing.

For the uninitiated, Northcrest is a well-preserved, swim-tennis subdivision developed between the late 1950s and mid-’70s. It’s also widely considered an architectural treasure trove—inspired by the timelessly hip designs of Frank Lloyd Wright and Joseph Eichler—where more than half of homes qualify as MCM, and all were customized to fit their lots.

Swing up to the gallery for a closer look at this latest Northcrest offering to hit the market, as listed six days ago with Clickit Realty.