A mammoth Dunwoody development proposal that called for office space on par with Ponce City Market and five times as many condos as Midtown’s fabled No. 2 Opus Place has gone back to the drawing board in response to changing market conditions, officials tell Urbanize Atlanta.

Grubb Properties unveiled plans in 2018 for a whopping 900 for-sale condos and a half-million square feet of offices just east of Perimeter Mall and north of Interstate 285. A smattering of retail and townhomes—plus a 3-acre greenspace with a multi-use trail—was also in the mix.

The project, Park at Perimeter Center East, is still planned for 19.4 acres where a mishmash of parking lots and three low-rise buildings, including the former Dunwoody City Hall, exist now. 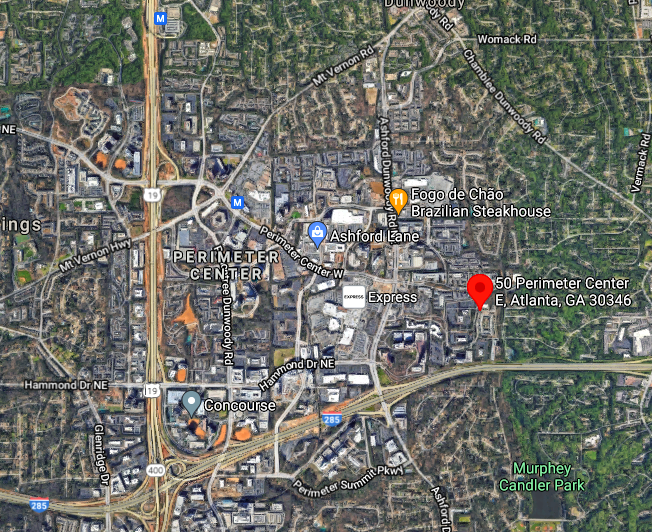 But given the Central Perimeter subdistrict’s changing dynamics—and an expected surge of well-paying jobs—Grubb Properties is opting for a more diversified development, according to company reps.

The altered plans call for far less office space—130,000 square feet—and a new outdoor dining and retail facet. On the residential front, 250 residences in a single high-rise will be restricted to residents age 55 and over. And a multifamily component with 350 flats will target “first-time renters and urban professionals,” per the rep.

The changes are “an effort to reduce the density of the project, while providing viable development alternatives,” according to an emailed summary.

Earlier plans for one facet of Park at Perimeter Center East.Courtesy of Grubb Properties

In changing its tactics, Grubb Properties specifically has an eye on projects such as RocaPoint Partners' Campus 244, which is expected to generate 1,800 jobs with average salaries of $85,000, as well as retail ventures like Ashford Lane and under-construction Perimeter Marketplace, set to be anchored by Publix.

“There is an increasing need for more residential offerings, more specifically multifamily, in the area,” reads the Grubb Properties email. “With recent college graduates also seeking employment, there is a growing demographic demand from the large millennial and Gen Z generations, who are already in, or just entering into the workforce. And given that peak births occurred in 2007, the demographic force is expected to last at least another decade.”