What started as a transportation project unveiling for a six-mile stretch of Southwest Atlanta roadway last week has devolved into a war of words between MARTA leadership and elected city officials.

A handful of Atlanta City Councilmembers organized a town hall meeting Tuesday evening attended by roughly 100 people to detail for the public why MARTA, they feel, has broken promises for building a light-rail system along Campbellton Road that some residents have wanted for decades.

In a scathing rebuttal released late Tuesday, MARTA officials contend that light rail was never promised in the area and that plans for a bus-rapid transit route are the best use of resources. The BRT option, according to the transit agency, was favored by a majority of Southwest Atlantans surveyed as part of two years of analysis and public engagement.

MARTA officials noted that Overstreet has been closely involved with the Campbellton Road project since its inception, has publicly supported the BRT option, was aware that light-rail transit was never a guarantee, and has stated her constituents aren’t interested in light rail.

As proof, according to MARTA, the transit agency released transcripts and video links to Overstreet speaking in support of BRT at City of Atlanta Transportation Committee meetings between April 2018 and September 2021.

In one 2018 meeting, Overstreet tells the committee "Cascade/Campbellton that whole area is not a fan of light rail,” per a video clip supplied by MARTA. “But I do understand that everyone is interested in bus rapid transit. I would like to have a conversation with you about the timeline. I am very interested in moving the process forward.”

MARTA has emphasized that BRT could be installed three years faster than rail service and cost significantly less: $130 million to build (versus $340 million for light rail) and $4.8 million to operate annually (versus $12.5 million). 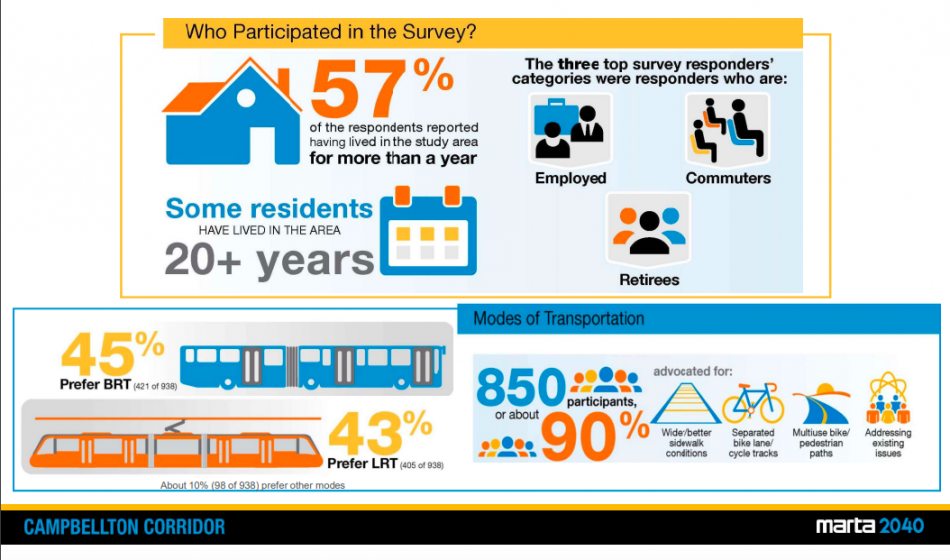 Critics have equated those cost savings to $200 million being pulled from the community. Former Atlanta Mayor Keisha Lance Bottoms blasted the plans on Twitter recently as “an insult to SW Atlanta.”

“The More MARTA Program does not set aside a specific amount of money for specific council districts, rather, the program expands the transit system for the benefit of all Atlantans,” according to MARTA’s Tuesday statement. “It is irresponsible to suggest that MARTA and the City of Atlanta teams that jointly administer the More MARTA Program have been anything but responsible stewards of that funding.”

MARTA made its BRT plans for Campbellton Road—one facet of MARTA 2040, a multi-billion-dollar system expansion—official during a virtual public presentation last week. The system would stretch between the Barge Road park-and-ride parking lot and MARTA’s Oakland City train station. It would be funded by the half-penny sales tax voters approved for MARTA in 2016, which is expected to generate $2.7 billion. 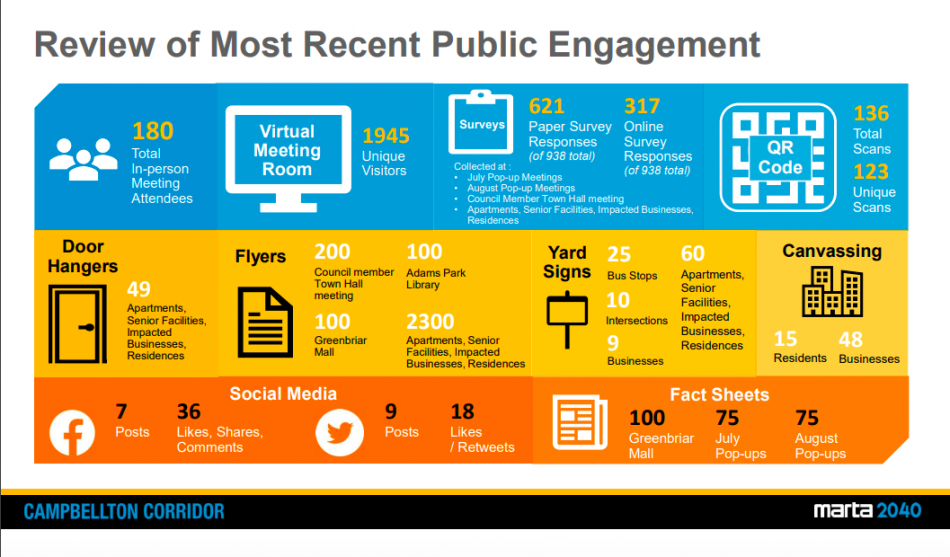 Following what MARTA calls two years of analysis and engagement, the agency has concluded that BRT buses running in the center lanes will provide the best, cheapest mobility—with the greatest prospects for better connecting into MARTA’s heavy rail system soonest.

The costs of full sidewalks, new streetlights, street repaving, and bike facilities along the route are still being calculated, so the precise cost isn’t yet known, per MARTA.

MARTA leaders posited in the Tuesday statement that high-capacity transit accessibility is what sparks economic development in communities, regardless if people are riding an improved bus system or trolley-like train cars.

“We know from the Summerhill BRT project that Carter and Georgia State University accelerated their plans for redevelopment of Hank Aaron Drive and Georgia Avenue when the BRT was announced,” the statement notes.

In conclusion, MARTA officials said they “look forward to less inflammatory rhetoric and more productive discussion” regarding Campbellton Road transportation in the future.