The $70-million redevelopment of mixed-use transit hub Lindbergh into “Uptown Atlanta” will include a multifaceted mecca for esports enthusiasts, project officials announced today.

Leading esports provider Skillshot Media plans to relocate its Alpharetta office and production studios to Uptown and create a “highly connected esports gaming hub” alongside classroom and training spaces for local students, according to Rubenstein Partners, which is redeveloping the 47-acre community.

The idea is that Skillshot will help turn Uptown into Atlanta’s new go-to destination for esports gatherings, as the industry continues to flourish in Georgia, thanks in part to favorable tax incentives.

Skillshot’s space is expected to function as a production studio, collaborative learning center, and retail space for gamers of all stripes. At the base of its facilities, Skillshot and Rubenstein plan to fashion Uptown’s 35,000-square-foot office atrium into a top-flight esports venue, capable of hosting up to 300 or 400 gamers. Plans calls for a huge LED screen with “new digital infrastructure to support live streaming to millions of gamers around the world,” according to Rubenstein’s announcement. 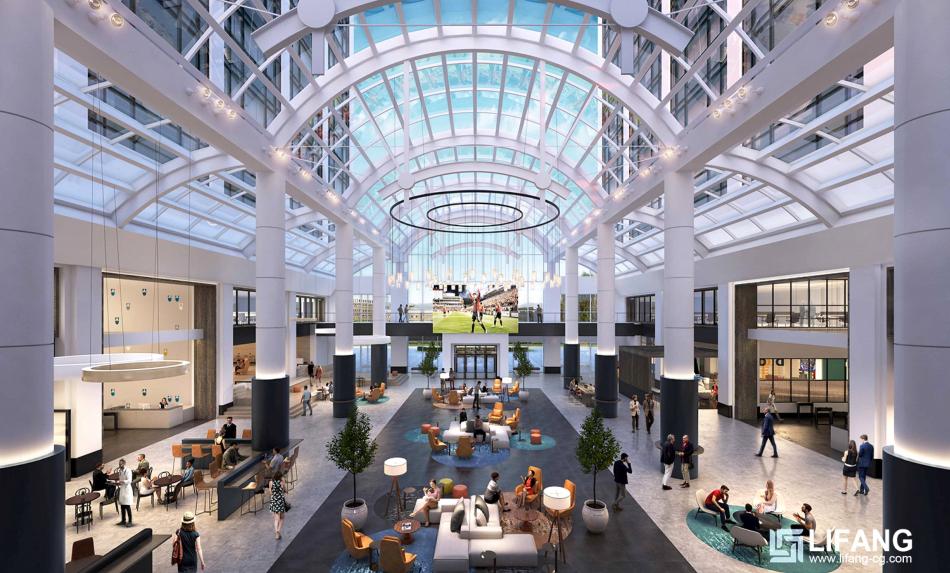 Rubenstein bought the nearly 20-year-old city center—home to Taco Mac, Tongue & Groove, 26 Thai Kitchen and Bar, and national chains like Dunkin’ and LongHorn Steakhouse—in 2019 for $187 million. By last year, roughly half of Lindbergh’s commercial space was vacant, and AT&T’s lease of the project’s twin 14-story towers ended in December. That left a blank palette for a Lindbergh redo that Rubenstein officials have said they want to appeal to younger, more tech-focused tenants.

Construction throughout the property is underway now, officials say. Rubenstein is focusing initially on refreshing building facades and improving the Main Street pedestrian experience with office balconies and outdoor patios.

The revised atrium is expected to act as Uptown’s “nerve center.” Beyond the massive LED screen, visitors can expect a full gaming center, golf simulator, bocce and foosball, a coffee shop and wine bar, along with a fitness center and second-story conference space.

Skillshot is also partnering with the University System of Georgia and the Georgia Film Academy to offer students workforce development programs for college credit. That begins with classes scheduled Tuesday for Georgia State University students, with credit offered in Digital Media, Esports Event Production, and Esports Hosting and Commentary.

The new facilities “will be a game-changer in Georgia as the state’s esports ecosystem continues to grow and thrive,” said Asante Bradford, a senior industry engagement manager with the Georgia Department of Economic Development.