A means for non-drivers to more safely travel through a growing district west of Midtown is coming together in time for Atlanta’s long spate of warm months.

The protected cycle track is being installed along Brady Avenue in Home Park, a curving connecting route between West Marietta Street and Howell Mill Road. It passes a number of attractions that include Miller Union and Baffi Atlanta restaurants, the Painted Duck bowling and gaming parlor, and nightlife destinations such as Compound.

Once finished, the cycle track has been designed to tie into existing bike lanes on Marietta Street, according to CID officials. A tune-up station with a bike air pump has been installed at what’s called the Howell Junction Pocket Park, where Brady Avenue meets West Marietta Street. 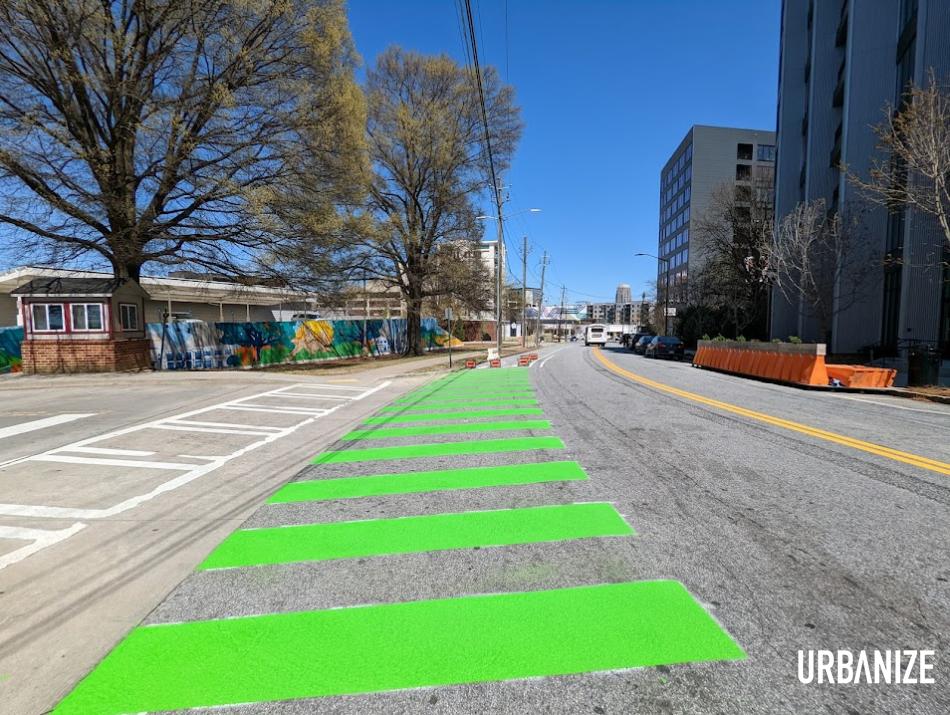 Brady Avenue was listed as a target corridor on former Atlanta Mayor Keisha Lance Bottoms’ Action Plan for Safer Streets, an effort to more than triple the city’s on-street, protected bike lane network in response to a rash of e-scooter rider deaths in 2019.

The initiative was expected to cost $5 million, paid for with funding from departmental budgets, the redesign of existing projects, and what city leaders described as “community partners” at the time.

The Atlanta Bicycle Coalition, which has compiled a mapped tracker for updates on the safer streets initiative, found that Atlanta Department of Transportation and its partners had completed about 11 of the 20 pledged projects by the end of 2021. Several other safer streets projects would be funded by the proposed TSPLOST and bond lists Atlanta voters will be asked to approve, or not, next month.

We’ve asked Upper Westside CID officials for details on when the Brady Avenue protected lanes will be finished, and at what cost. This story will be updated with any additional info that comes. In the meantime, pedal up to the gallery for a tour of construction progress, as of late March.

"The project spans from Marietta Street and Howell Mill Road, to Brady Avenue and Howell Mill Road. We imported the ground-level delineators from Spain from a company called Zicla; this product is their 'zipper.' We decided to go with Zicla because they use recycled materials and provided a product that has held up very well in Barcelona. We have about 7,000 pounds of zippers. The zippers have a 90-degree hard edge facing vehicles and a 45 degree taper facing the inside of the cycle track making them mountable for cyclists but hopefully not for cars.

"We decided to also include 36-inch tall flex posts to add vertical separation that drivers can't miss. The green striping is done in a product called, MMA which has a grippy texture and will be safe in slick conditions.

Weather permitting, the project will be done in three weeks. The project is locally funded by us, Upper Westside CID, and the Westside Community Improvement Association (WCIA), a neighborhood funding partner in the Marietta Street Artery neighborhood."