An adaptive-reuse mix of artist space, affordable housing, and urban-style walkability is beginning to take shape in the core of historic College Park.

Sandwiched between the city’s MARTA-connected downtown and recently built apartments and a Hotel Indigo, the College Park Arts Campus is remaking church buildings into a mixed-use hub that’s meant to incubate artistic growth.

The concept, as put forward by First United Methodist Church of College Park, is a means of creatively reusing the century-old campus rather than selling it off to outside development groups.

The initial phase is located across the street from The Pad on Harvard apartments, which developers Air Realty (now Windsor Stevens Holdings) called the city’s first new mid-rise in 40 years when it opened four years ago. 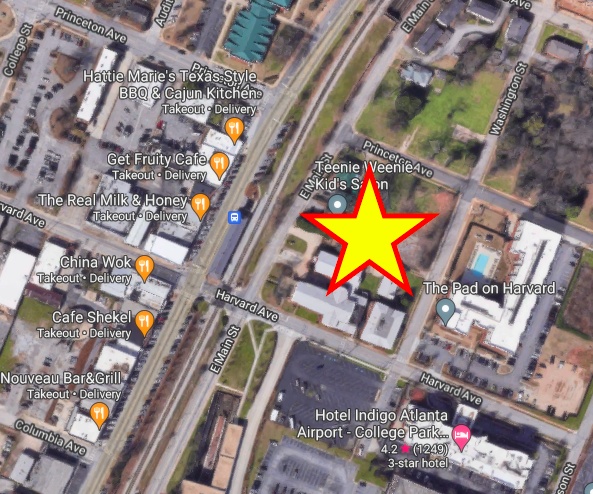 The College Park Arts Campus' location, in relation to Main Street attractions, at left, and some of the largest private investment projects the city has seen in generations. Google Maps

At the arts-driven venture, demolition on a corner Arts Building is wrapping up. An alley project called the Art Walk is also starting to take shape, according to project designers eightvillage, which released new renderings this week.

The first co-op building will include for-sale, live-work units, the headquarters for PushPush Arts, a partner in the project, and a coffee bar. Pricing for the condo units is still being finalized, according to a project official.

“These spaces are part of the first phase of the project,” the designers wrote on Instagram, “and will be the center of gravity for the larger campus.” 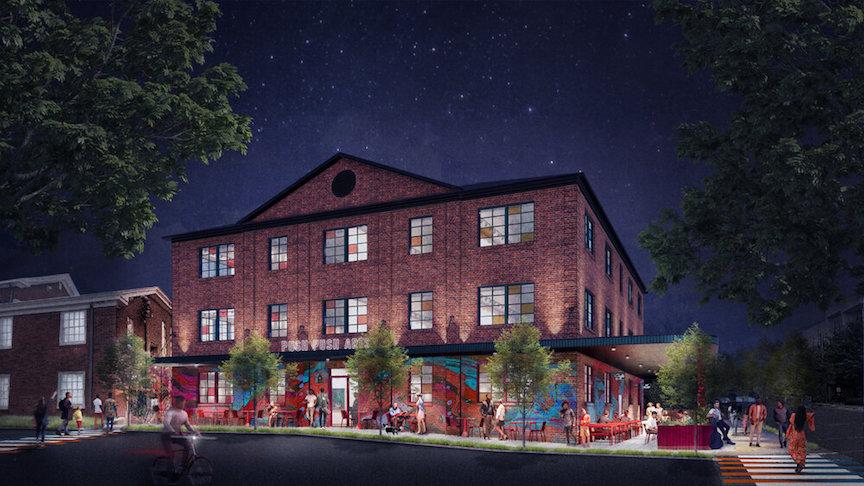 Planned look of the Arts Building, an artist-owned, live-work cooperative and headquarters for PushPush Arts. Dichroic film treatments on some window panels will provide a soap bubble-rainbow effect, per designers. eightvillage

Alongside a mix of arts programming leg by PushPush, the campus plans call for housing both for-sale and at affordable rental rates, according to project leaders.

Blueprints show that retail, theater space, studios, artist “shophouses,” greenspace, and additional parking could also be in the mix.

Find more context in the gallery above, and head here for a breakdown of the initial building’s floorplans and studio costs.

[CLARIFICATION: This story has been updated to reflect that prices of for-sale units are still being finalized—and that the church is a driving force behind the concept. "The thesis of the project actually originated from the First United Methodist Church of College Park," one official notes via email, "and they've been instrumental in getting the project moving forward ... They've been in the community for 125 years, and though their membership is down, they chose to re-think their property for a mission-based project instead of selling it off to the highest bidder."