Selig Enterprises recently announced the completion of a three-tower venture that has “forever changed” Midtown’s skyline—thanks in no small part to a massive steel exoskeleton on its tallest building that bursts to life with a range of LED lighting.

Announced five years ago, the 1105 West Peachtree project got underway with demolition in 2018 and continued construction through the depths of the COVID-19 pandemic. 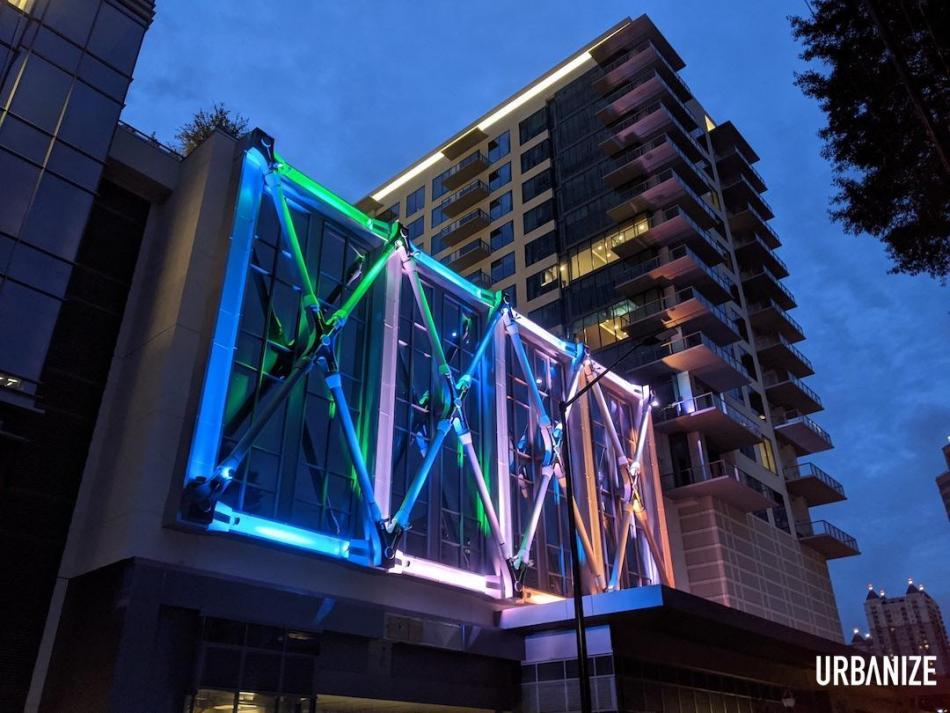 The array of exoskeleton lighting shown during testing phases this past summer. Josh Green/Urbanize Atlanta

Having leased 500,000 square feet across 19 floors, Google is expected to move employees into the office component early next year, according to Selig reps.

Designed by Rule Joy Trammell + Rubio, all three buildings rose concurrently at the 3.5-acre site with varied façades that Selig officials say “give the illusion of distinct buildings constructed over the course of time.” Each tower is conjoined by a ninth-floor, open-air amenities space called the Sky Terrace.

The most distinctive feature, especially at night, is the office tower’s 410-foot exoskeleton, meant to act like a functional art piece. Colors can be programed to reflect events or special occasions, such as rainbow patterns for Atlanta Pride, red-white-and-blue for Fourth of July, or full red to cheer on the Falcons’ next Super Bowl run in 2036.

The inspiration, as Selig chief operating and development officer Steve Baile previously told Urbanize Atlanta, was the Meccano sets he had as a kid and similar exterior flourishes on buildings in Hong Kong.

More recently, Baile said the project’s completion has made Midtown’s core blocks feel “super-charged” with the “addition of two significant office tenants, in-demand luxury residences, and a top-of-the-line hospitality program” that add density and an urban feel, according to prepared statement.

Elsewhere, the office tower features The Office Bar restaurant in the lobby, a 100-seat conference center, gym, 1,250 parking spaces, additional retail slots on the street, and a bike service and repair room. Head to the gallery for a closer look.