Chick-fil-A’s plans to wipe out a gas station and replace it with a drive-thru restaurant in a part of town that prides itself on improving walkability have rankled more than chicken feathers lately.

But after a close look at the latest, revised renderings and site plans—and at the risk of playing devil’s advocate—we can’t help but wonder: Given the context, are the Atlanta-based mega-chain’s ambitions for a corner of Boulevard really so misguided?

Chick-fil-A has been hungry to stake an outpost along Ponce de Leon Avenue, east of Midtown, for several years.

It once appeared imminent, if briefly, that the chicken purveyor would replace longstanding (and still operating) bar Dugan’s in the 700 block of Ponce, attracted to that establishment’s “trophy location.”

That rumor quickly fizzled, and Chick-fil-A went quiet, until a zoning application in May 2020 made clear the restaurant planned to rezone two parcels and replace a Texaco where Ponce meets Boulevard. 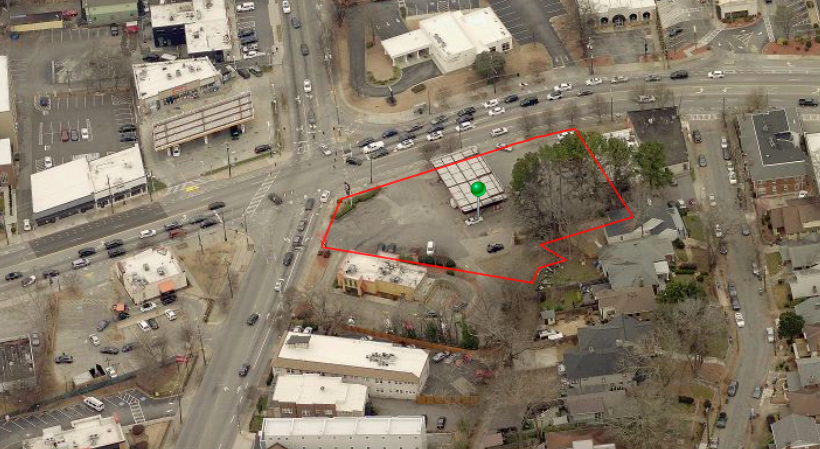 Outline of the .95-acre parcel in question. City of Atlanta Planning Department

The 689 Boulevard NE site is neighbored by a drive-thru Popeyes. The three corners across the street have a drive-thru Dunkin’, a drive-thru bank, and drive-to Shell gas station, respectively.

The sort of precedent that gives Atlanta urbanists fever dreams has long been set. Champs-Élysées this section of Boulevard is not.

Still, the Chick-fil-A proposal would be built within the BeltLine Overlay District—a zoning measure meant to encourage inclusive development that’s friendly to both pedestrians and mass transit, with more greenspace than asphalt.

In May, when presented with the initial restaurant proposal, both NPU-M in Old Fourth Ward and NPU-E in Midtown all but told Chick-fil-A reps to go back to the drawing board.

“We did not support the design [because] it prioritized vehicle access and service without consideration for being in a dense, urban, walkable community,” as the Midtown Neighbors Association summarized last year. 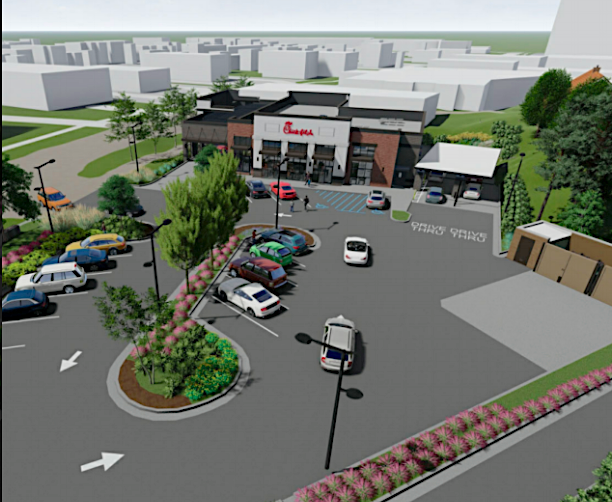 Other concerns: additional traffic, the general suburban-style layout of the proposal, and the fact that a large parking lot would consume such a prominent intown corner.

Chick-fil-A returned last fall with an altered, brick design that pushed the drive-thru area to the back of the property—instead of wrapping the main restaurant building—and added a walk-up window for taking orders from people not in cars.

Those plans still drew criticism from neighborhood groups and development arbiters with the Atlanta Zoning Review Board, but Chick-fil-A has nonetheless received city approval to move forward. 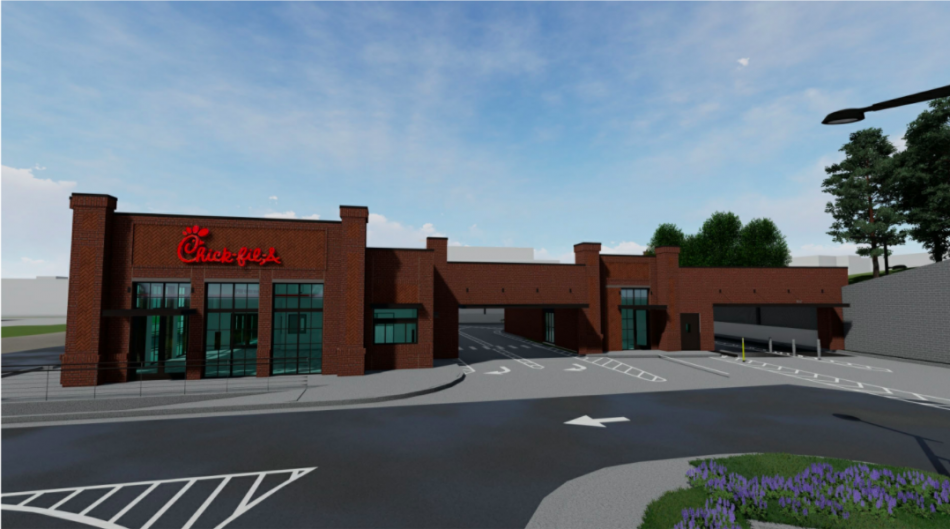 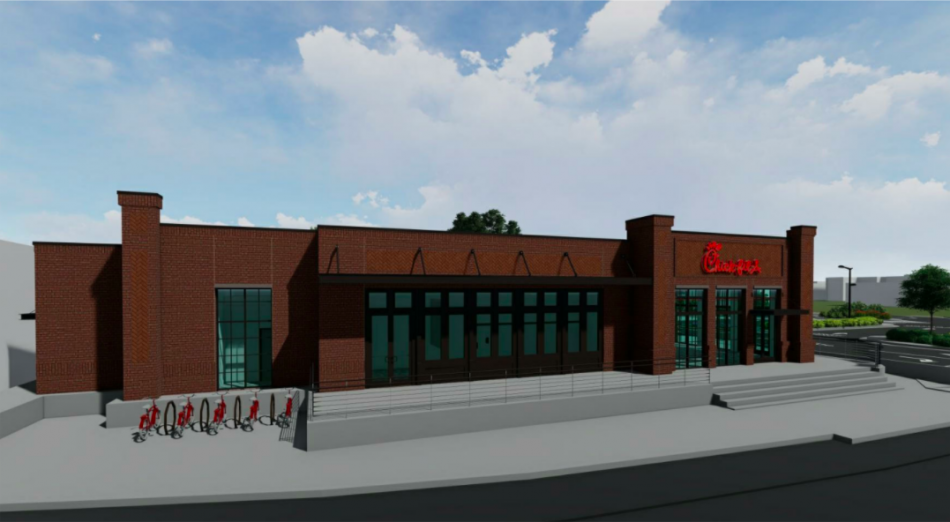 The restaurant's Ponce frontage, where urban-style bike parking is planned, according to updated renderings submitted to NPU groups in 2020. Designs by Chick-fil-A, via Midtown Neighbors Association 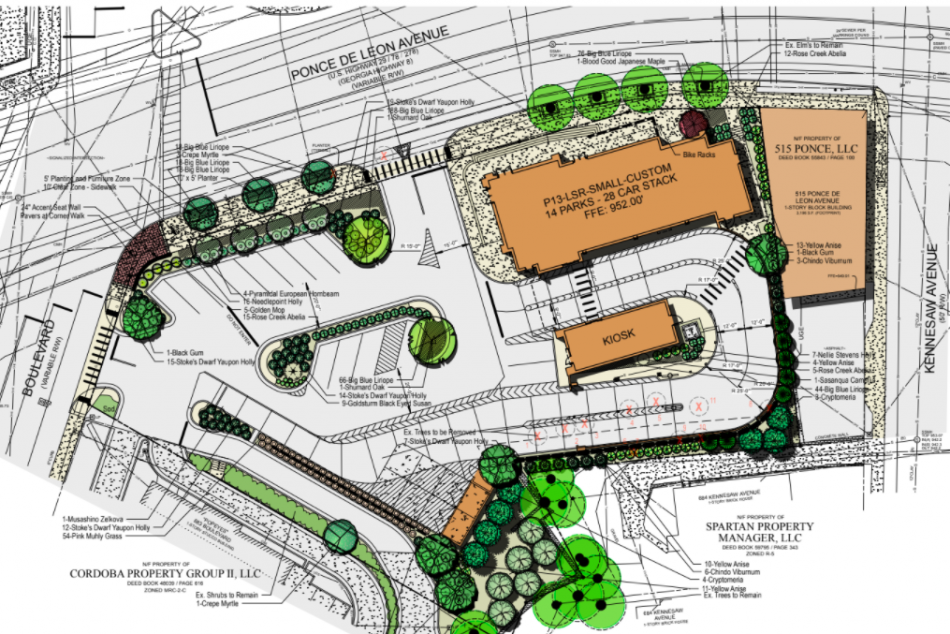 The restaurant's planned layout and landscaping. Designs by Chick-fil-A, via Midtown Neighbors Association

Permitting paperwork for the demolition of Texaco’s 3,000-square-foot convenience mart and other structures is being reviewed now.

Maybe the array of drive-thru options along Ponce will help tamp down demand and traffic problems? The worst-case scenario would be a repeat of Chick-fil-A’s impact on the Glenwood Park area, where lines of cars at peak hours can swell enough to back up traffic on adjacent streets.

That problem has been known to impede people trying to use the BeltLine next door—and drivers trying to get anywhere else.

Then again, Atlantans' appetites for crispy nuggets and waffle potato fries should not be underestimated. Residents and commuters near the Ponce-Boulevard intersection should probably brace for congestion. But at least Sundays should be quiet.