A former church property’s residential revival is expected to debut next month as further proof that Atlanta’s appreciation for adaptive-reuse projects is more widespread than ever.

Replacing the church facilities, which had been vacant for nearly 20 years, are 51 apartments and an amenity space in the 12-sided chapel that officials with Atlanta-based developer Braden Fellman Group describe as “stunning.” 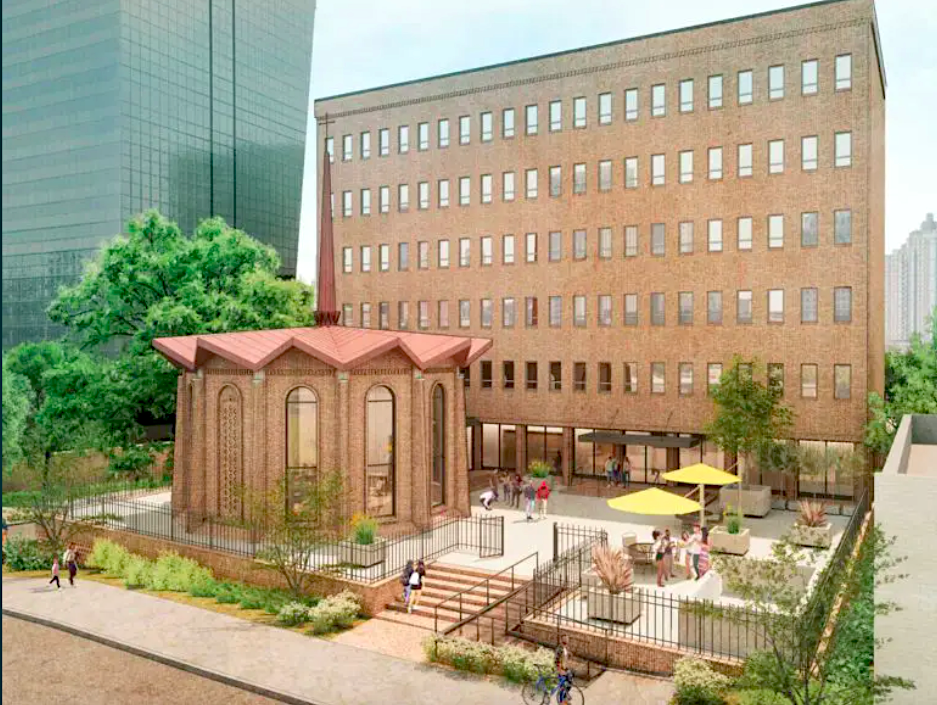 A grand opening for the studio and one-bedroom apartments is planned January 1, project reps tell Urbanize Atlanta. The complex’s original open house was held during the same month more than a half-century ago.

“​​At 57 years old, this building has just crossed the threshold for historic status, meaning there are very few historic rehabilitation adaptations from this era,” development principal Andrew Braden said in an announcement. “This provided an especially unique set of challenges, but we couldn’t be more excited about the result.”

Back in 1964, the North Georgia Methodist Conference sought to build a new downtown Atlanta headquarters and enlisted the architectural firm Finch, Alexander, Barnes, Rothschild, and Paschal (FABRAP). Construction of the $1-million United Methodist Center wrapped in 1966, highlighted by the chapel, with its soaring 30-foot windows of stained glass sourced from historic Wesley Memorial Chapel.

But by 2002, the Conference had almost fully vacated the complex where downtown meets Old Fourth Ward—located diagonal from Atlanta Civic Center—for newly built facilities in Gwinnett County, according to Revival Lofts' website. Two decades of idleness (and barbed-wire, in some places) followed.

Braden Fellman Group bought the property last year from American Capital Properties for $3 million and lined up $7 million to revive it as space-conscious, city-style apartments, as Bisnow reported.

Intended to honor its midcentury roots, with retained, original architecture details and 1960s-style décor, the Revival Lofts units average 500 square feet, with some apartments as small as 345 square feet, per marketing materials.

According to a project rep, rents will range from $1,000 to $1,800, with an average of $1,400 monthly. All are classified as affordable for the area, according to a spokesperson, but approximately 30 percent of apartments will be reserved for renters earning 80 percent of the area median income.

Meanwhile, on the flipside of downtown, Braden Fellman Group has begun construction on another adaptive-reuse project in Adair Park: the $15-million, mixed-use conversion of former Abrams Fixture Corporation warehouses.