Carmen Stan was walking her dog in Midtown one morning and stumbled upon a ghastly, abandoned brick structure a Frisbee’s toss from Piedmont Park.

But Stan, an architect with the Robert M. Cain firm, saw potential. And that chance encounter may have saved the midcentury relic from becoming a pile of rubble.

Now fully renovated into a stylish, mixed-use two-story at 242 11th Street, the property will be featured on the MA! Architecture Tour next month, part of an architectural showcase the Atlanta Design Festival has been organizing since 2007.

When Stan found the 1960 building, however, it had significant fire damage, a homeless encampment inside, and a “For Sale” sign in front so weathered it looked like it wasn’t even trying. It had been condemned by the City of Atlanta and faced imminent demolition.

She brought the property to architect Robert Cain’s attention, who worked out a deal to buy it and begin renovations that recently wrapped up. 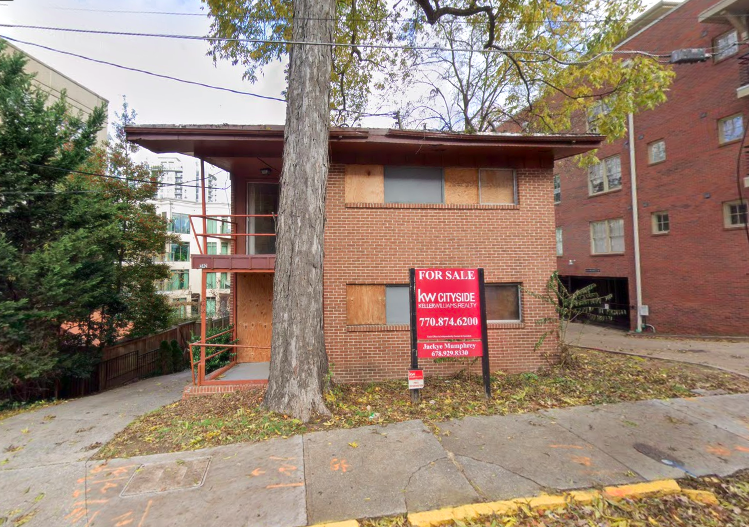 The abandoned property near a Piedmont Park entrance in 2018. Google Maps 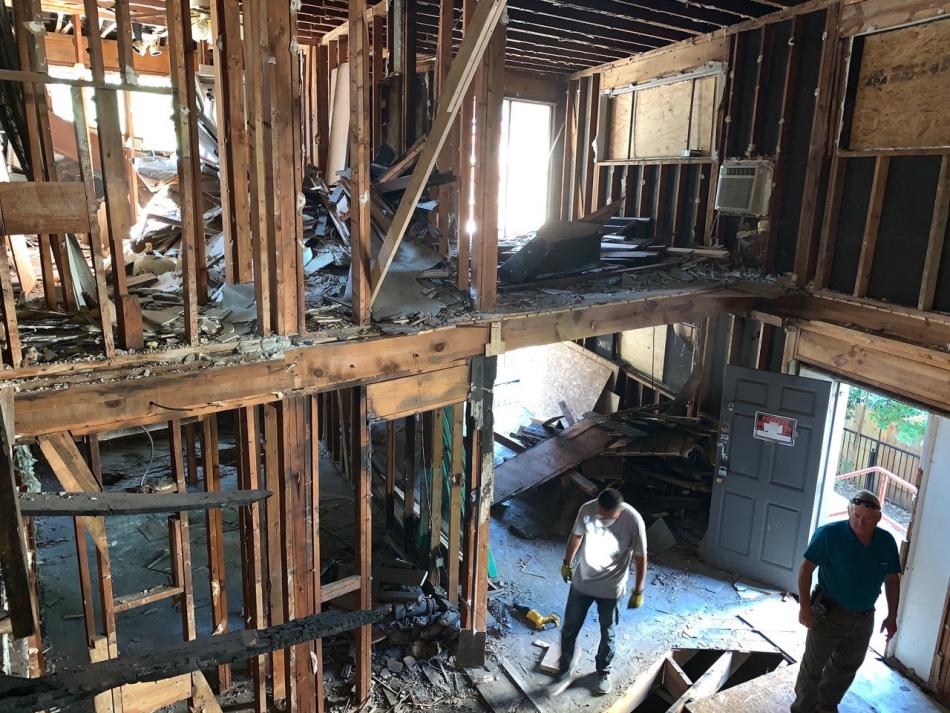 Interior conditions at the condemned 11th Street property. It had been abandoned for six years, and fire had scorched the central stair and other areas. Courtesy of Robert M. Cain Architects

Today, this melding of offices, apartments, and other usable spaces is called “Redivivus,”  meaning “brought back to life,” or “reborn.”

According to the architects, it was originally built as a four-unit apartment building on a steep lot, near the point where 11th Street dead-ends into Piedmont Park.

Two units on the first floor have been converted into RCMA’s new office, with walls removed and steel beams and columns inserted to greatly open the space. Below that, the basement and crawl space were converted into the firm’s 1,200-square-foot model shop, with space to store archives. 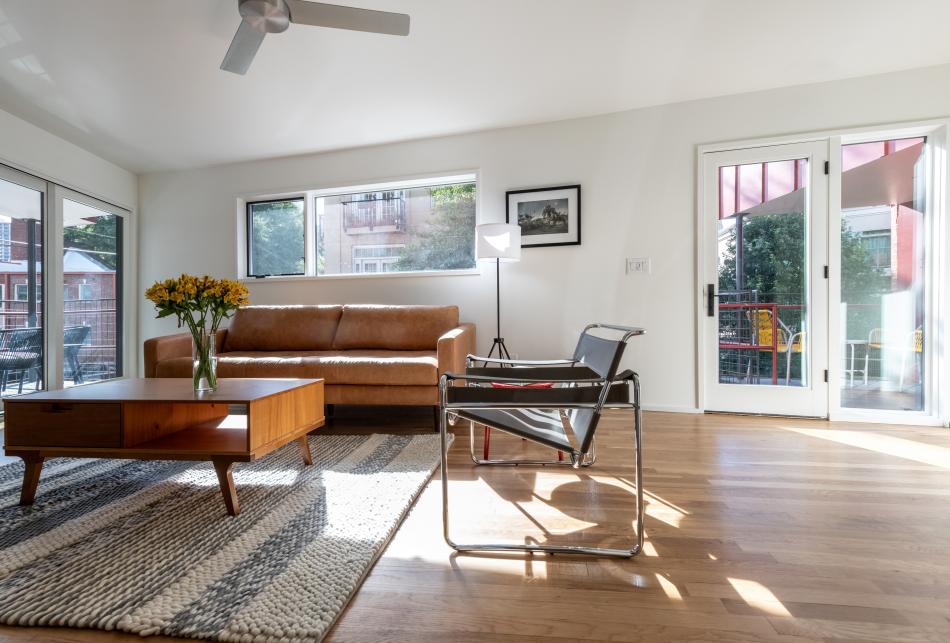 Patios off the main living space, with furniture befitting the era. Photography by Fredrik Brauer 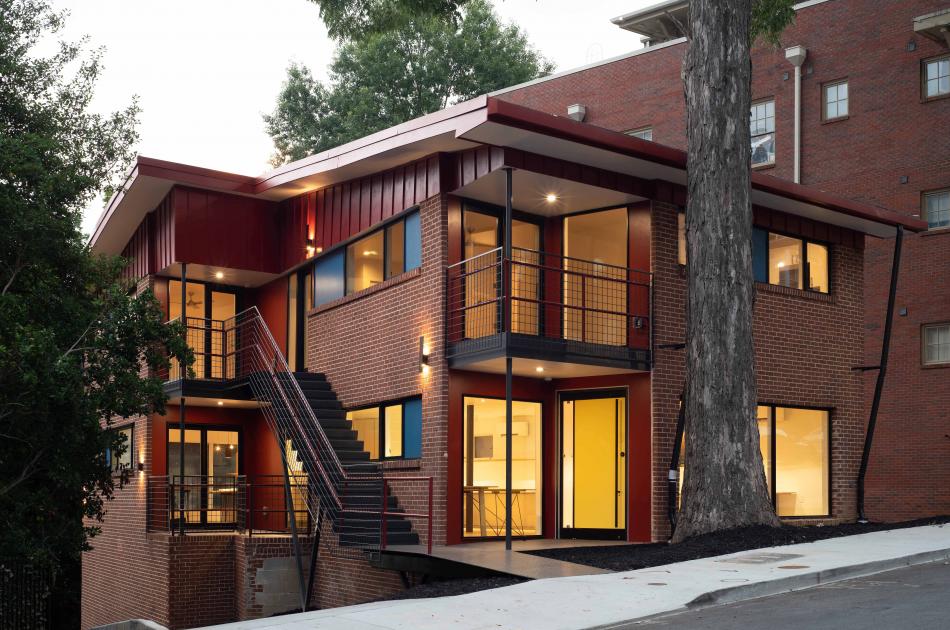 Where an exterior stair was added to conserve more interior space. Photography by Fredrik Brauer

Outside, midcentury features such as brick veneer were restored, while an exterior steel stair was added to replace a fire-damaged one inside, saving interior space.

Sustainability features include photovoltaic panels on the roof, LED lighting, energy-recovery ventilation, along with aspects such as bike racks (with showers for staff), a charging station for EVs and e-scooters, and xeriscape with native plant species.

And here’s an interesting tidbit Atlanta urbanists will appreciate: “Utilization of a little-known ordinance for buildings constructed before 1965 allowed RMCA to provide zero parking onsite,” instead using dedicated spaces down the street, as the architects noted in a project description provided to Urbanize Atlanta. 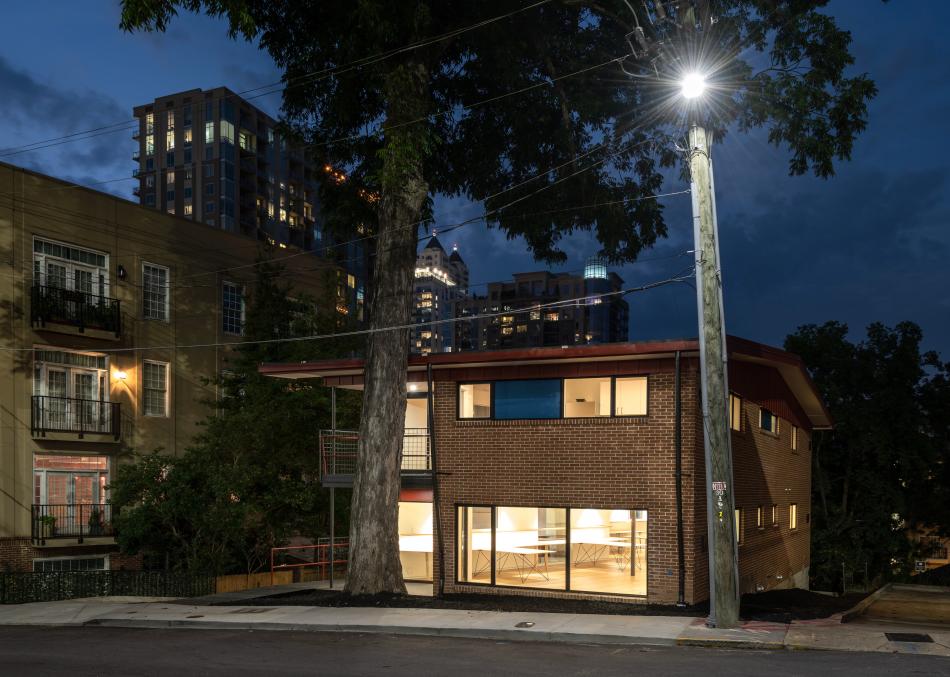 A peek into the architects' 1,370-square-foot offices on the first floor. Photography by Fredrik Brauer

Redivivus will be part of Atlanta’s self-guided tour on October 9. See a full list of MA! Architecture Tours 2021 here, including stops in Serenbe and at this community in the North Georgia mountains.