Another major development is in the works within a circa-1997 Tiger Woods’ drive of one of metro Atlanta’s most storied golf courses.

Roughly two blocks south of East Lake Golf Club’s Hole 4, Perennial Properties is seeking to rezone a large grassy field into a classification that would allow for nearly 300 new residences and other uses set around a new public greenspace in unincorporated DeKalb County.

Situated along 2nd and Alexander avenues, across the street from Donald Trimble Mortuary, the three parcels in question are collectively known as the Bag Factory Site. The land, spanning about 11.7 acres, has been empty for decades, according to developers. 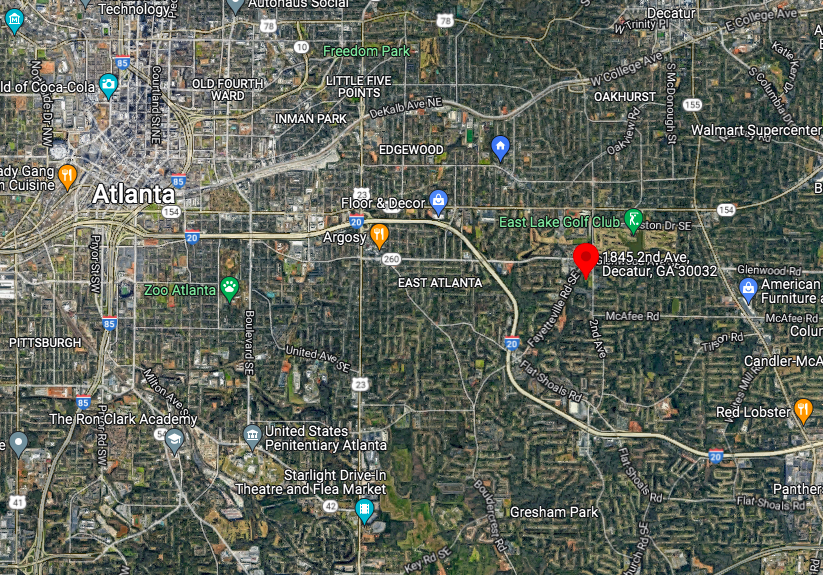 The developer is seeking to downzone the site to multifamily residential (MR-2) from its current commercial and industrial designations. Perennial hosted three community meetings about the project in February.

The proposed Bag Factory development would include 237 apartments in two four-story buildings, 44 rental townhomes (two stories atop garages), and two street-level retail slots with about 5,000 square feet of space.

A public-accessible village green with a central pavilion would act as the heart of the community, spanning about 32,000 square feet. 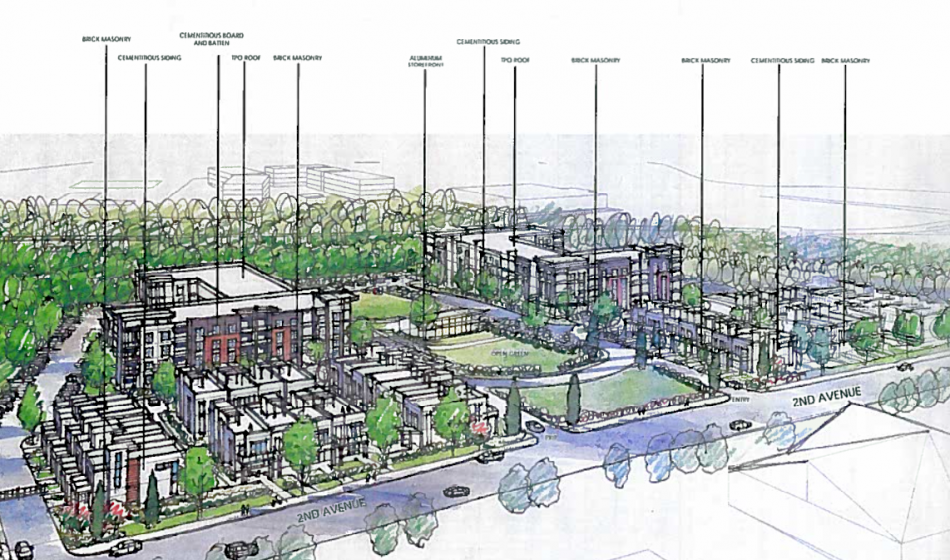 Glenwood Avenue—where Perennial is building another mixed-use venture next to a Publix—is located about a quarter mile to the north. Options for pedestrian access between the Bag Factory development and Publix are being explored, per the development team.

The Bag Factory’s apartments would all be market-rate, with none reserved as affordable housing. In a rezoning application, developers did point out that only about 30 percent of rentals would be two or three-bedroom apartments, with the others intended to be more affordable, smaller units—either studios or one-bedrooms.

“While the proposed development will not have a lot of units to accommodate large families,” wrote Perennial’s legal reps, “it will provide housing opportunities for young professionals and empty-nesters.”

Any timeline for construction isn’t clear. An inquiry to Harold Buckley, at attorney representing the project, hadn’t been returned as of press time.

Around the corner on Glenwood Avenue, next to the Publix entrance, Perennial is developing a four-building, mixed-use project called simply East Lake.

That venture, also designed by the Dynamik Design firm, includes 230 apartments and 10,000 square feet of retail, in addition to office space.

Immediately south of that construction site, Columbia Ventures and Purpose Built Communities recently developed 108 affordable and market-rate townhomes, garden apartments, and villas in a project called Gardenside at The Villages of East Lake along Fayetteville Road.

The gated complex includes a playground and priority placement at Drew Charter School for residents with K-12 children.

Founded in 1988, Perennial has developed and operated more than 20 sites around Atlanta, per the company’s rezoning application. Have a closer look at the firm’s plans where greater Decatur meets East Lake in the gallery above.