A unique mixed-use project is cooking in East Atlanta that would incorporate a scenic former quarry that even eastside urban explorers might not realize exists.

Clark Property R+D is the same company spearheading The Lodge project where East Atlanta Village meets Ormewood Park, which is incorporating a former Masonic lodge into its master-planned mix beside a realigned Moreland Avenue intersection.

The firm’s principal, Jesse Clark, says The Lodge will pale in comparison to Skyhaven Quarry in terms of scope and complexity.

“It’s the most comprehensive development I’ve ever worked on,” Clark wrote to Urbanize Atlanta via email. 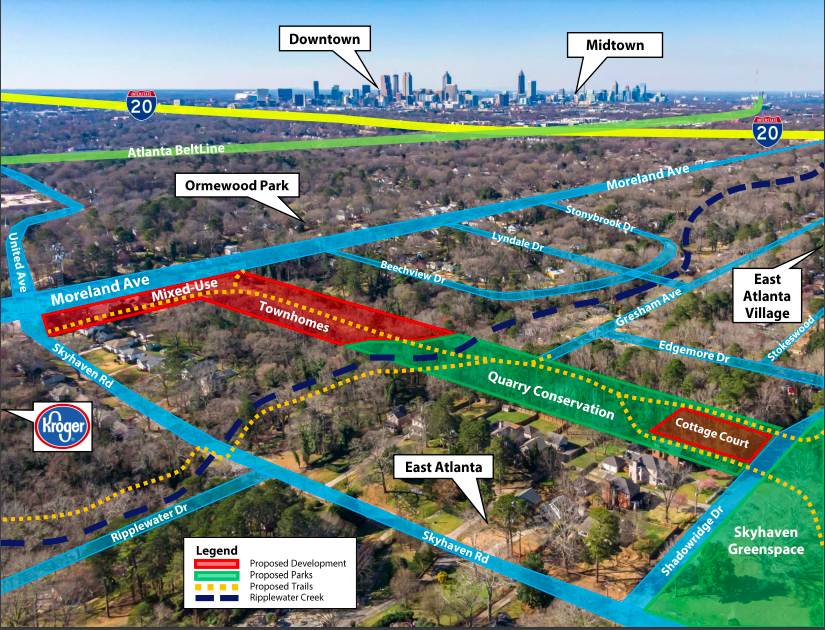 Overview of the acreage in question, in the broader context of southeast Atlanta. Courtesy of Clark Property R+D 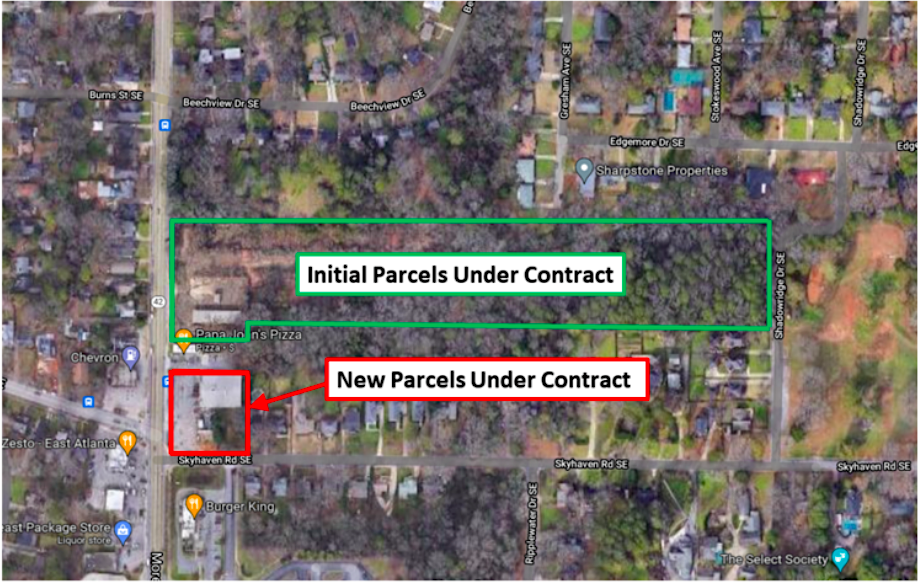 How the contingent properties in question relate to Moreland Avenue, at left, with a Papa John's in between. Courtesy of Clark Property R+D

The properties in question, all under contract now, collectively cover almost 12 acres about a mile due south of East Atlanta Village. They include the vacant former quarry site and the more recent addition of a corner property where Moreland meets Skyhaven Road, currently home to a Family Dollar retailer and a cell tower.

Clark has partnered with Xmetrical design architects, Perez Planning + Design landscape architects, and Porch & Square with a goal of weaving together a variety of housing, including affordable options, transportation upgrades, trails, public space, and nature conservation.

Clark says Skyhaven Quarry also has potential to be combined with a 14-acre passive greenspace owned by the DeKalb County School District, located immediately east of the quarry, where Skyhaven Elementary School was demolished in 2016.

Doing so would create a “significant park and trail network” in what Clark considers a “park desert,” where residents have limited access to greenspace.

With its 40-foot cliffs, the abandoned and overgrown quarry would be at the center of the project, with new trails and Ripplewater Creek wending through. 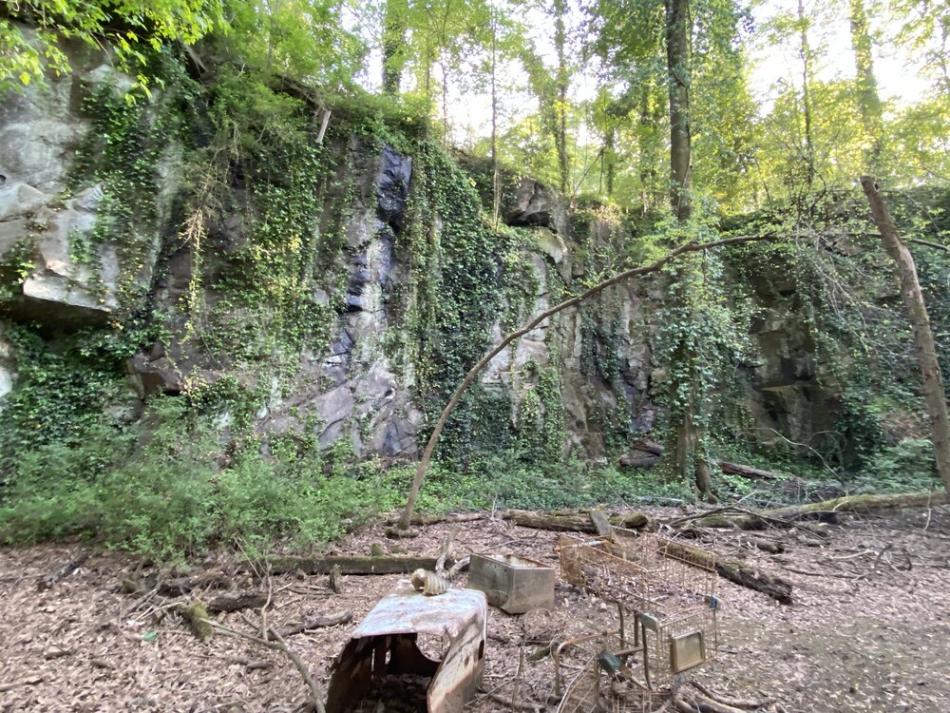 Following several rounds of revisions, the most recent Skyhaven Quarry plans call for 125 apartments fronting Moreland, with 57 townhomes and 20,000 square feet of commercial space. Set farther back, on the opposite side of the quarry, would be a pocket of 16 cottage homes, ranging in size from 1,200 to 1,500 square feet.

Parking would be a combination of 47 garage spaces for most townhomes, and 167 surface parking spaces tucked off Moreland. According to Clark, current rents in the area wouldn’t support the cost of building a parking garage. 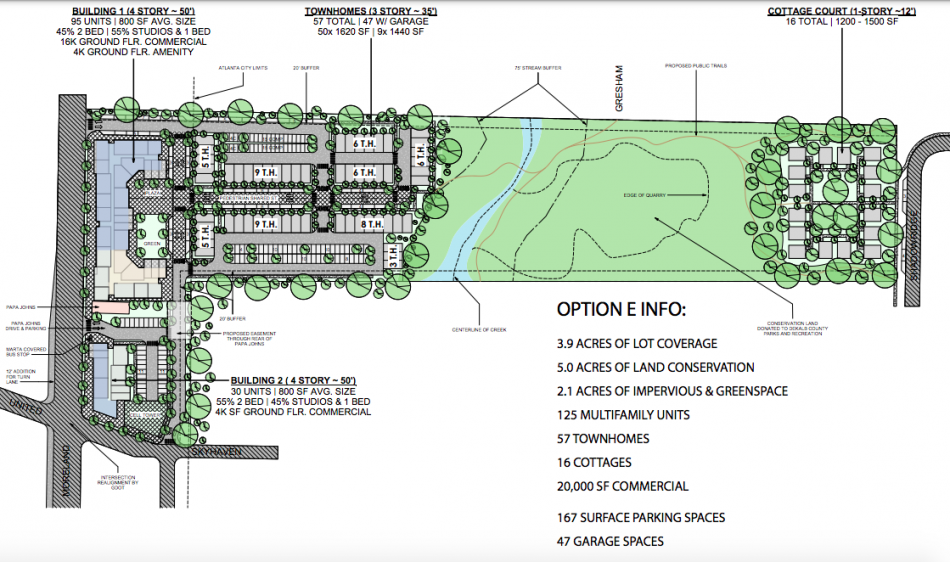 With retail, the intent is to attract smaller food and beverage operators—as opposed to destination restaurants—to tamp down on the impact of parking needs in the evening, when apartments are occupied, and to encourage walkability, Clarks says.

A Papa John’s Pizza location fronting Moreland is a holdout and not under contract, dividing the project into two sections.

At the southernmost corner piece, Clark’s team is working with the Georgia Department of Transportation to potentially design the project in a way that would support realignment of another crooked Moreland intersection, this time at Skyhaven Road.

Another aspect of the project would be an 8,000-square-foot, public-accessible pedestrian plaza and green connected via trails to the housing, retail, and Moreland.

Clark says the goal is to submit Skyhaven Quarry for rezoning in April and gain approvals for construction this summer. He’s targeting the second quarter of 2023 for groundbreaking.

More details on the Skyhaven Quarry project’s evolution, along with a feedback survey, can be found here. Hike up to the gallery for a look at the site today—and a glimpse at what its future may hold.