Renderings and plans unveiled Tuesday evening show that a statement building over Atlanta’s busiest freeway is in the pipeline.

The 61-story, mixed-use proposal by Rockefeller Group, a Manhattan-based firm with offices in Buckhead, came before the Midtown Development Review Committee for what boiled down to little more than an architectural overview, as committee members were also seeing most plans for the first time.

Should the TVS-designed tower move forward as proposed, it would be the tallest built in Atlanta in nearly 30 years, according to project filings made with the city.

The Rockefeller project would dwarf the SkyHouse Midtown apartments directly to the north, and peer down over the Connector a block to the west. 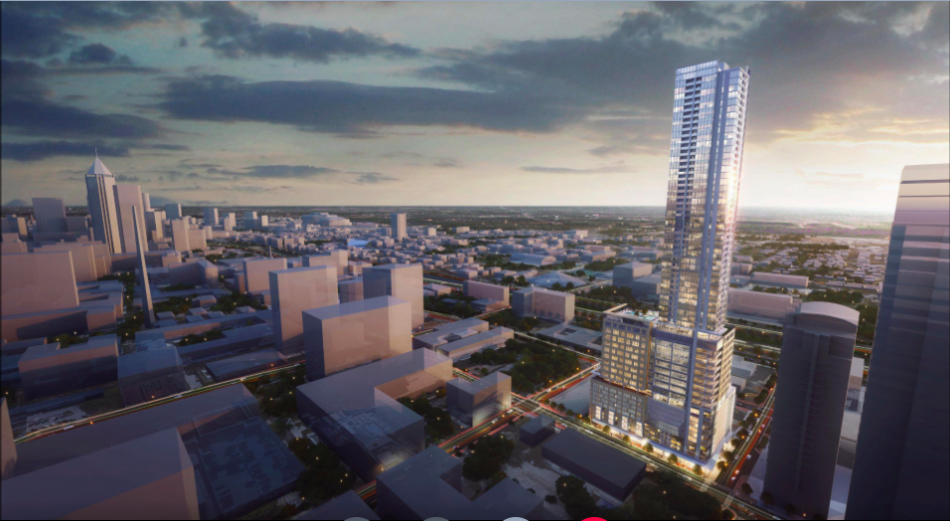 The 1.1-acre site in question at 1072 West Peachtree Street has long been occupied by a U.S. Post Office building and parking lot. But Rockefeller forked over a substantial amount—a near-record $25 million—last year to take control, and the Post Office plans to relocate as its lease expires, as the Atlanta Business Chronicle has reported.

Rockefeller Group was a partner in the three-tower project located diagonal from the property in question, Selig’s recently finished 1105 West Peachtree, where Google is a major tenant.

According to presenters with lead architect TVS and Brock Hudgins Architects, the local architect of record working on the residential portion, the building’s exterior will be a careful mix of glass, metal panels, and limestone that adds visual appeal as uses shift.

Plans call for 350 residential units on upper floors, with just eight homes per level, said architect Ben Hudgins. All of them will essentially function as corner units with two “cardinal views” each across the city, Hudgins said. 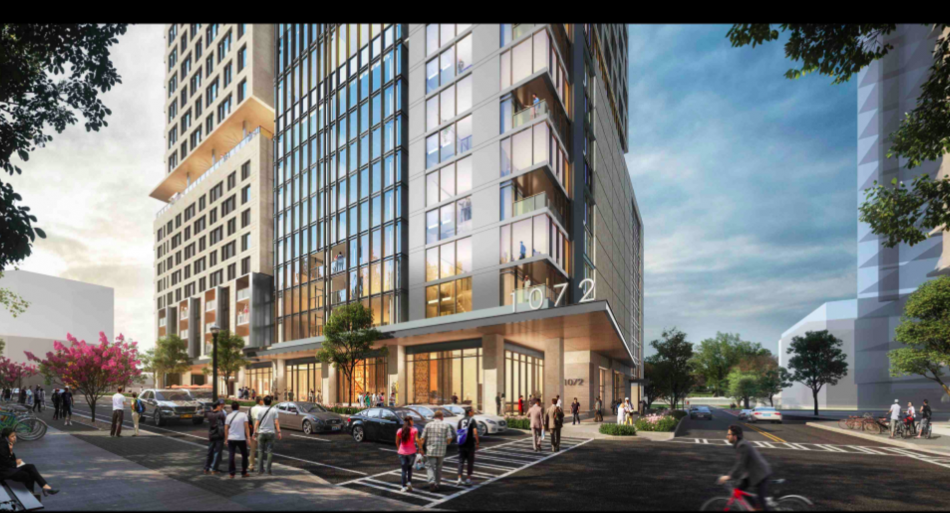 Below that, 212,000 square feet of offices and roughly 6,600 square feet of street-level retail is planned. (The latter space, facing West Peachtree Street, could allow for a large single restaurant, or a maximum of two.) An eight-story parking deck with some 850 spaces would be fully screened with translucent glass, per presenters.

Elsewhere plans call for a two-story bike room, and a curb cut along 12th Street that project leaders want to widen from 24 to 39 feet to allow for easier below-grade loading. The majority of the tower’s base would be activated with either restaurant space, or separate lobbies for residences and offices.

Tuesday’s Midtown DRC meeting went over its allotted hour; the project is expected to be reviewed in more detail again next month, with additional and revised images.

In terms of stories, the building as proposed would tally the second-most in Atlanta, bested only by Westin Peachtree Plaza’s 73 stories. Atlanta’s second tallest building, SunTrust/Truist Plaza, has 60 stories. Have a closer look in the gallery.