The quest by one of Atlanta’s oldest churches to create affordable housing from underused property could result in two towers of new development downtown—and monthly rents for new apartments starting around $500.

That’s according to Invest Atlanta paperwork obtained by Urbanize Atlanta that shows the scope of redevelopment plans around Atlanta First United Methodist Church at 360 Peachtree Street for the first time.

Church leadership initially made headlines in August 2019 by issuing a Request for Proposals that challenged developers to help them realize a “God-size vision” for creating inclusive housing on 1.8 acres next the gothic-style sanctuary from 1903. Situated between Peachtree and West Peachtree streets, the land in question is currently home to pay parking lots, an unused outbuilding, and an education building.

Now, the church and developer are seeking a predevelopment loan of $250,000 from Eastside TAD funding to set the project in motion, according to Invest Atlanta. The first phase is expected to cost north of $105 million overall.

That will include a 16-story building with 170 apartments—the majority of them reserved as affordable or workforce housing—where West Peachtree Street meets Ivan Allen Jr. Boulevard. 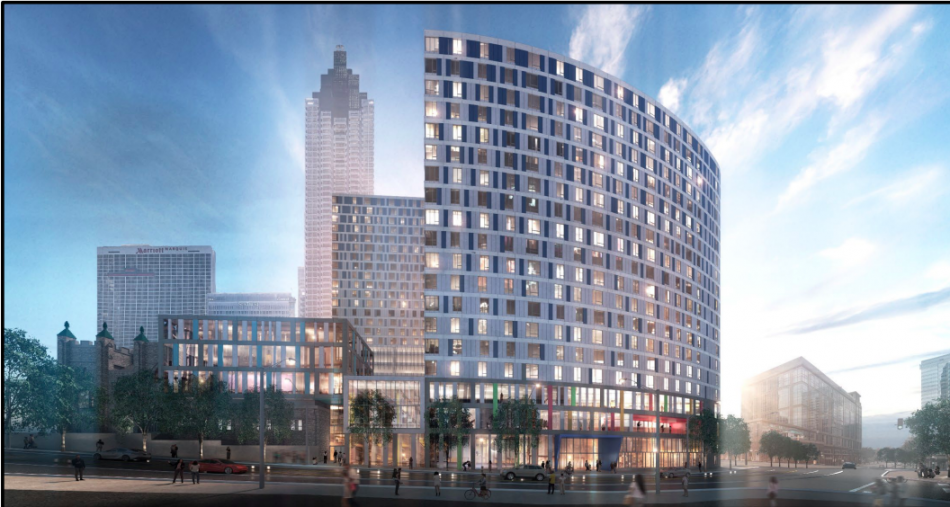 A four-story podium building with 5,000 square feet of retail, a parking garage, and new facilities for Atlanta First Day School and Ansley School would also be included in the phase one mix, per Invest Atlanta.

Aside from some renovations, the historic sanctuary building would be untouched in the redevelopment. The church’s annex—which houses the Midtown Assistance Center to help the working poor with food, transportation, rent, and utilities—is expected to be rehabilitated.

The phase one timeline calls for having a firm financing commitment in place by the third quarter of this year, breaking ground in the first quarter of 2023, and delivering the first phase in 2024, per Invest Atlanta. 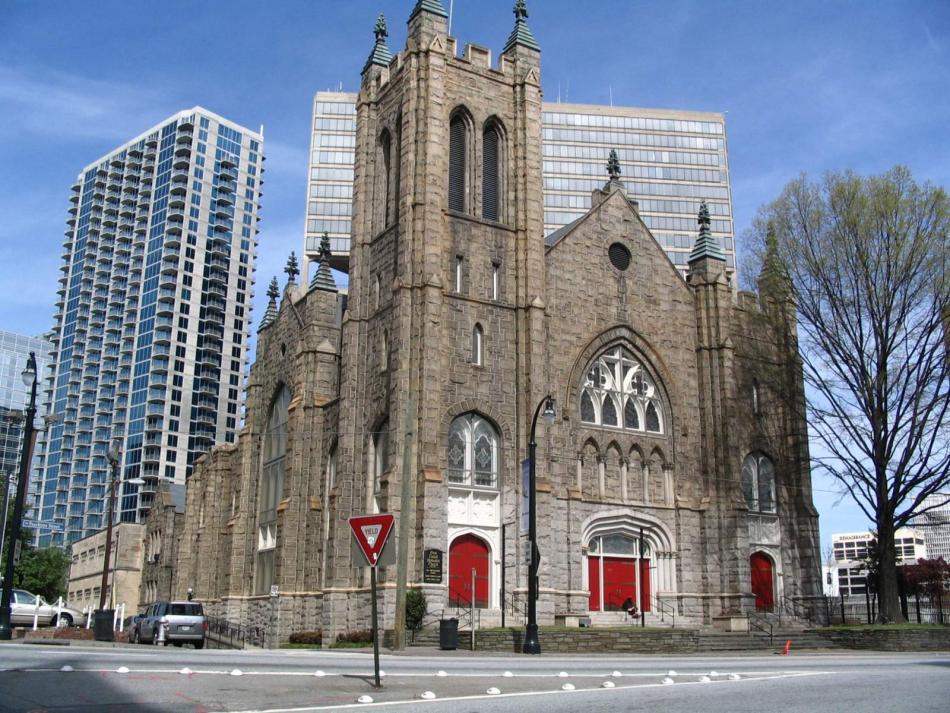 The current church was erected in 1903 with Stone Mountain granite. According to church historians, its belfry contains the only church bell in Atlanta to survive the Civil War. It's been used in three different buildings since 1850.ZeWrestler/Wikimedia Commons; 2009 image

It’s unclear how many apartments the two-phase project might ultimately entail, or when it all could be built. Inquiries to Atlanta First UMC and Invest Atlanta officials haven’t been returned.

Renderings also show a phase-two tower of significant height standing immediately south of the church and phase-one building. The site’s SP1 zoning classification would allow for a tower rising 50 stories or more, as church leaders have previously noted. 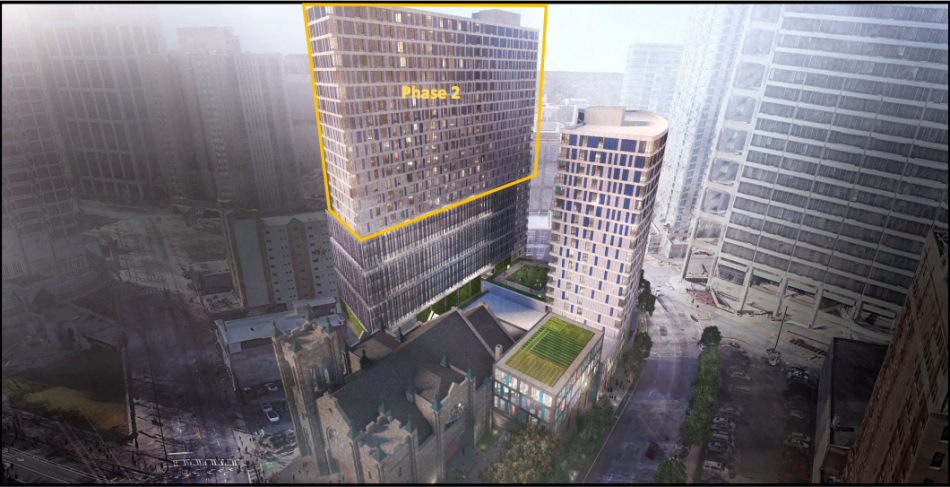 The overarching plan for both phases, with Peachtree Street shown at bottom left. Evergreen Redevelopment/Moody Nolan; via Invest Atlanta

According to the project’s phase-one affordable housing forecast, 42 units in the 16-story building would rent for 30 percent of the area’s median income or less.

That means rents would range from $485 for one-bedroom apartments (four of them total), to $582 for two-bedrooms (32 total), and $672 monthly for six three-bedrooms in the plans.

Invest Atlanta notes that benefits of the project include activating church parking lots that are underutilized most days, while "providing new mixed-income residences with deep levels of affordability.” Building new facilities for a school that will serve homeless kids, and space for shops and eateries in an area that lacks retail, are also bonuses, according to Atlanta’s economic development arm. 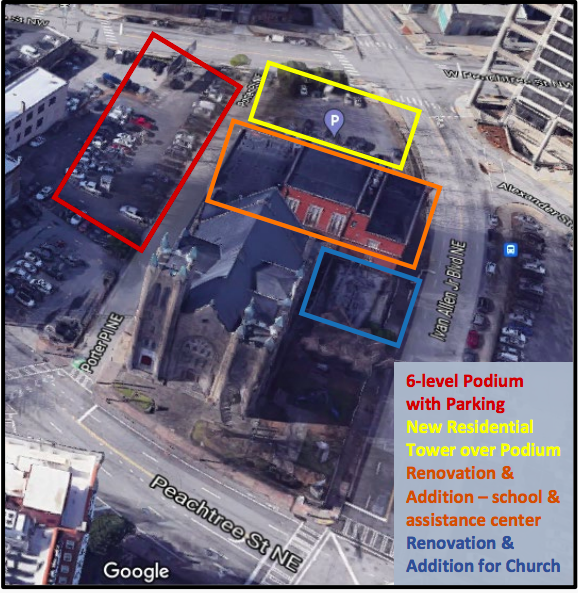 Where components of the redevelopment would be arranged, in relation to Peachtree Street (bottom). Invest Atlanta/Atlanta First UMC

The ministry, which has operated downtown for more than 170 years, would determine what all of the property is used for in perpetuity, per the earlier agreement.

Atlanta First UMC isn’t expected to spend anything to develop the site, and all marketing costs should be refunded through future profits, officials have noted. No land will be sold—the church will instead lease the ground to developers—and the deal is expected to provide the church “multiple streams of income … for years to come.”

Beyond Evergreen Redevelopment and its construction arm, the development team will include Moody Nolan as lead architect and Balfour Beatty and H.J Russell & Company as general contractors. SHAPE and Goode Van Slyke will also assist with architectural designs, per Invest Atlanta.