With its motto of “Full Service… Fair Prices,” a unique, adaptive-reuse entertainment concept expects to open in English Avenue in a matter of weeks to take advantage of summertime revelry in Atlanta.

The concept is coming together along the southern edge of Lincoln Property Group’s 19-acre Echo Street West project, the largest private investment in English Avenue in generations.

Westside Motor Lounge is scheduled to open in June, according to PR reps who predict the “one-of-a-kind culinary experience” will be “THE place to be on Atlanta's Westside this summer.” 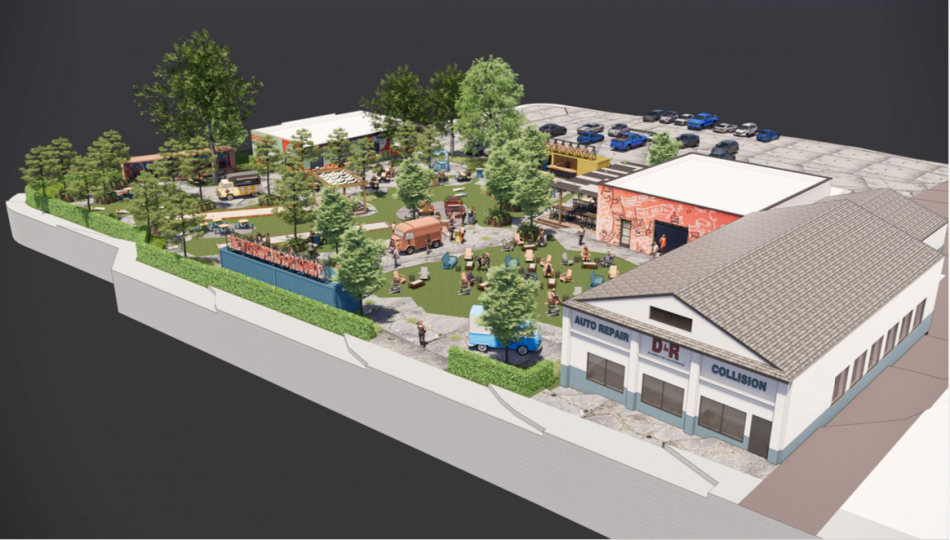 Developers have previously told Urbanize Atlanta they envision the “funky” and “eclectic” concept as a tailgating hotspot for Falcons and Atlanta United games at Mercedes-Benz Stadium, which is located about a mile away via the Westside BeltLine Connector trail.

Plans call for building out the property with an expansive bar, restaurants, lounging and seating spaces, plus a half-acre courtyard with shuffleboard and other yard games. A screen and stage will host small concerts and other events.

Tenants and other details are expected to be announced soon.

STHRN Hospitality Co. plans to introduce a model where employees will have opportunities to earn ownership stakes in the businesses at Westside Motor Lounge. The venue will join the recently opened events space Guardian Works and expanded artist hub Guardian Studios, located at the opposite end of an English Avenue site that had been largely vacant for decades.

Lincoln broke ground in 2020 on the mixed-use village’s $265-million first phase, in hopes of capturing momentum and investment dollars similar to what’s happened along the BeltLine’s Eastside Trail.

The Westside Motor Lounge was designed by the ASD/SKY architecture firm, with interiors by Bunker Design. Find more context and a preview of what’s to come in the above gallery.