For more than five years, a group called Intown Atlanta Disc Golf Club has had its sights set on DeKalb Memorial Park, a large greenspace near Interstate 20 with open fields, mature trees, basketball hoops, gardens, and baseball fields in the Parkview neighborhood, between Kirkwood and East Atlanta.

The nonprofit’s goal is to create only the second disc golf course in the City of Atlanta, providing free outdoor recreation and showcasing an intown greenspace they feel is hidden in plain sight.

The neighborhood approved the 18-hole course in 2017, and DeKalb County agreed to fund its construction on overgrown land. All was going swimmingly—until the COVID-19 pandemic ground society to a halt two years ago. It wasn’t long before DeKalb County Parks and Recreation pulled back its funding for the course.

“The rest was left on us to pick up and complete if we wanted it,” says Ryan Sage, Intown Atlanta Disc Golf Club’s vice president.

Sage’s group certainly still wants the course, and they’re making headway again toward bringing it to fruition—albeit a grassroots operation this time.

Metro Atlanta counts more than 30 disc golf courses within 40 to 60 minutes of downtown, Sage says, but for players or anyone curious about the sport, an 18-hole course in Perkerson Park—located on the southside in Capitol View and Sylvan Hills—is the only option today. (All courses are free, and according to DiscGolfNow.com, the requisite discs can be bought from about $8, with the average price around $13 to $15 per disc.) 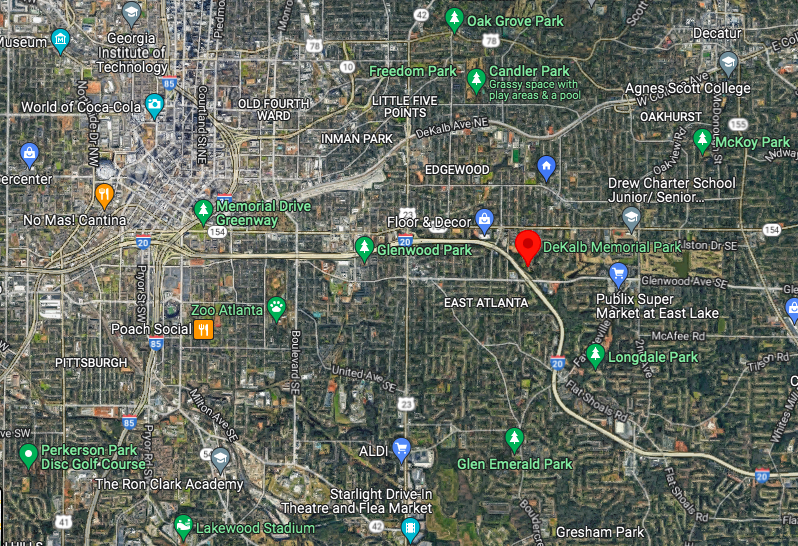 Sage’s nonprofit has received 19 baskets, or holes, from the county, but the course, should it happen, would be considered a donation to the park on behalf of the disc golf club. They’ve had to lean on volunteer labor and crowdsourced donations to fill the funding gap—but have managed to raise $41,000 of the $55,000 required since October, bringing more than 190 donors on board to date. Hole sponsorships are going for $2,000; sponsors so far include developers Urban Realty Partners, Sage notes, which plans to redevelop a nearby church property recently cleaned up in Kirkwood.

A second “playtest” with temporary baskets will be open to the public beginning at 10 a.m. Sunday as a means to study and adjust the course before it’s permanent.

Sage says the course will serve a purpose beyond giving buddies a reason to toss streamlined Frisbees on nice days.

His group estimates more than 50 people will play the DeKalb Memorial Park course daily, boosting foot traffic while tamping down on crime and litter—as was the case with Perkerson Park, he says. Outreach to local schools has also begun.

“The idea is to get them and their kids out at the park, so we can teach them about the sport,” says Sage. “I’d like to have a youth league at the course.”

Volunteers have cleared most fairways at the park and prepped areas where teepads will be installed. The disc golf club is in the process of reviewing contractor bids to build out aspects of the course such as stairs, retaining walls, and teepads. Volunteers would be responsible for course maintenance.

The timeline for construction hasn't been determined.

“We’d like to say it could be done by late spring or summer, [but] if funding stalls, then it could be pushed back a bit longer,” says Sage. “The latest contractor I walked with this past week said they could start by mid-May and be done by June if we signed off on their bid.”