Lane closures this week and recent permitting activity could point to a long-stalled tower redevelopment at a marquee Midtown corner being reactivated with construction as planned.

Sometime between Tuesday evening and Wednesday morning, road-closure barriers were installed to fully block 13th Street, along with two lanes of Juniper Street, around the south and east sides of the Campanile building at 1155 Peachtree Street, where developer Dewberry Capital (formerly Dewberry Group) began construction prior to COVID-19 lockdowns and later walked away.

“The last time there was any serious work happening was the last time that little stretch of 13th [Street] was closed,” as a tipster in the area relayed this week. “Closing half of Juniper [Street] at that intersection is no small thing.”

Whether the barriers are related to the Campanile’s redevelopment—and possibly setting the stage for a crane—isn’t yet clear. We submitted inquiries Wednesday with Dewberry Capital officials and Midtown Alliance and are still waiting to hear back. In the meantime, recent permitting activity could help shed some light. 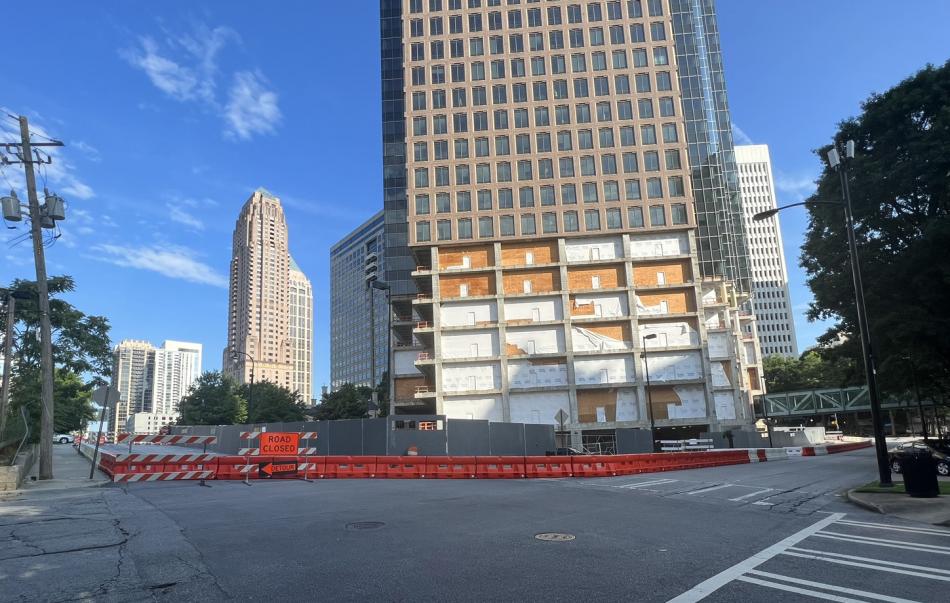 Street-lane closures this week around the south and east sides of the stalled Campanile redevelopment. Submitted

In May, Dewberry associates filed permitting paperwork to remove the 21-story building’s roof-level structure. Other work would remove precast concrete cladding from the Campanile’s exterior façade, according to filings with the City of Atlanta’s Office of Buildings.

Later in May came an application to disconnect and reconnect electrical power at the building, followed by other permitting paperwork in late June related to a sewer plug.

All of that followed a Midtown Development Review Committee meeting in April where Dewberry associates revealed plans for a more ambitious Campanile redo they stated they hoped to start by late 2022, at latest.

According to those plans, Dewberry will add six new floors of offices atop the tower, bumping the height to 27 stories. New designs also call for roof terraces at levels 23 and 27—and for replacing the building’s existing skin with a curtain of stone and glass on all floors. 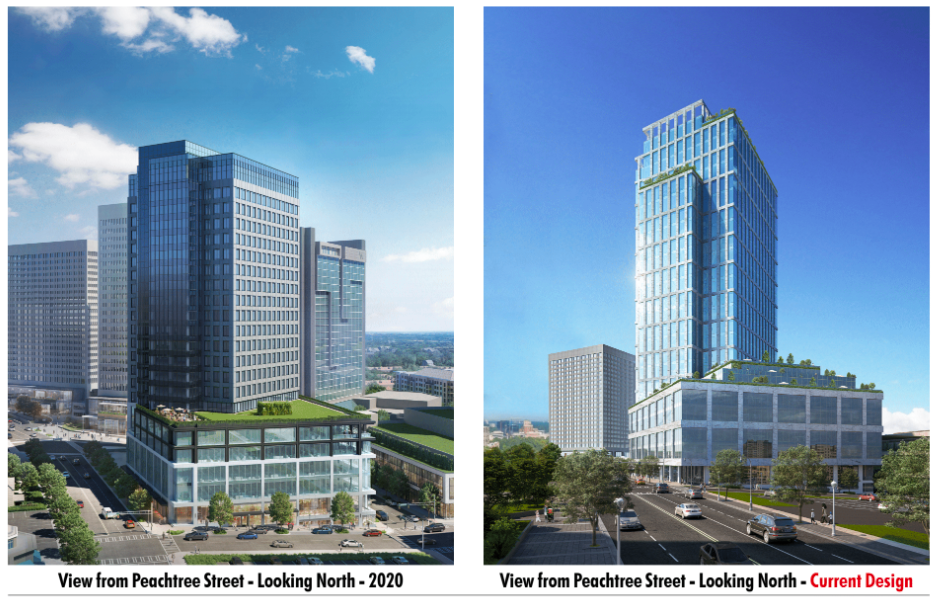 Closer to the street, eight new levels of offices and retail would be built around the base of the 1980s landmark, adding to 304,000 additional square feet at Campanile overall. Elsewhere, a dated plaza where Peachtree meets 14th Street is expected to be swapped for a larger, hardscaped open space, with a cascade of steps leading to 14th Street, across from Colony Square, according to plans outlined by Dewberry reps.

Those same bottom floors and plazas have been gutted, exposed, and idle behind construction fencing since early 2020, irking many residents. Officials with the city’s Office of Buildings filed a complaint against Dewberry in September, decrying the site as an “abandoned project.” 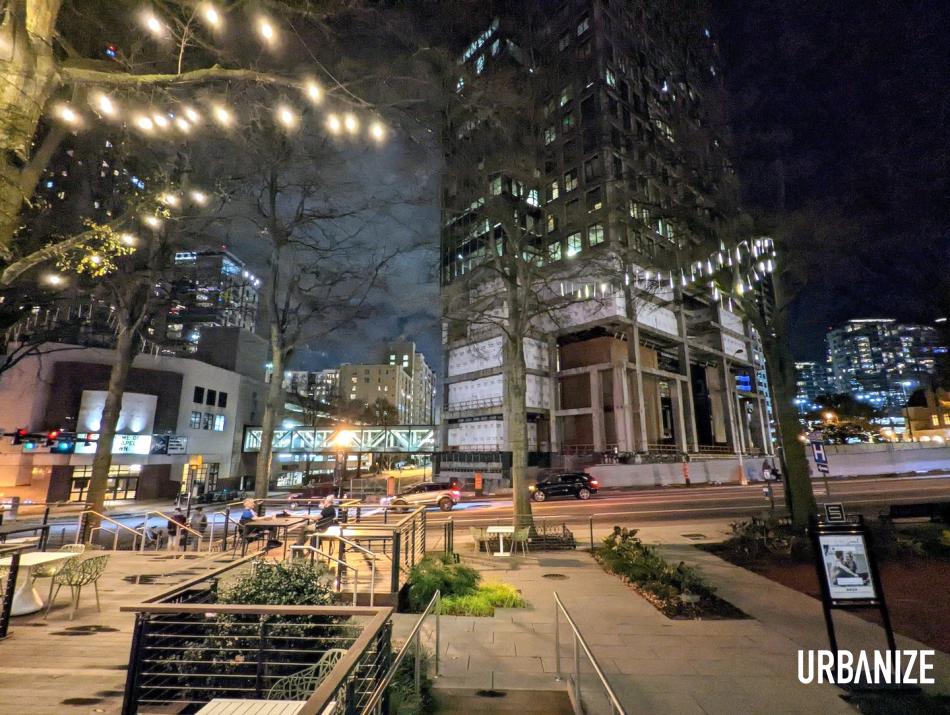 According to Special Administrative Permit paperwork filed in April, the revised designs “will create an environment that stimulates pedestrian activity for the Campanile project and the Midtown community,” with retail fronting Peachtree, 14th, 13th, and Juniper streets. Midtown DRC members were generally supportive of Dewberry’s latest plans.

Dewberry has blamed Campanile’s delays on several factors, including a dispute with a contractor, the pandemic, and one marquee tenant (SunTrust, now Truist Bank) relocating and consolidating its offices downtown. The AJC found last year that “financial snags” have also taken a toll, including a $186-million loan considered to be distressed. 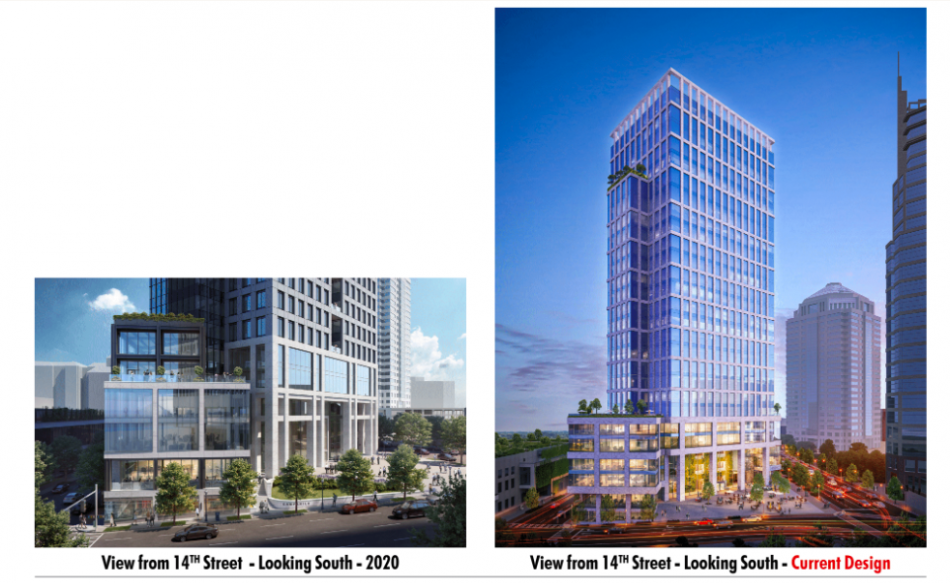 The view from Colony Square, to what would be a more open plaza across the street. Courtesy of Dewberry Capital; designs by John Dewberry, Peter Logan, and Gary O’Connor in conjunction with Smallwood

What's more, as Bisnow reported in May, a federal judge has ordered the head of the Atlanta-based development company, John Dewberry, to pay nearly $43 million in penalties, following a heated dispute with a Virginia engineering and commercial real estate company, also called Dewberry, related to “willful and intentional” trademark infringement. (Automatic responses from former Dewberry Group email addresses state the company has changed its name to Dewberry Capital).

Built in 1987 as Bell South’s corporate headquarters, the original 450,000-square-foot Campanile was purchased by Dewberry in 2010. The design update at the tower’s base has been more than five years in the making. Let’s hope, especially for the sake of Midtown residents in the area, this week’s road closures are a sign those plans are finally coming to fruition.