Explosive growth in the blocks between Georgia Tech and the Howell Mill Road corridor is set to continue in a significant way this year, according to developers.

Allen Morris Company is planning to build a 20-story apartment tower called Stella at Star Metals that would join an office mid-rise and hospitality-living building as part of the company’s growing, $500-million Star Metals District in Home Park, part of the area commonly referred to as West Midtown.

Renderings indicate the 312,000-square-foot Stella building will rise on a site just east of Star Metals Offices—adjacent to a planned hotel in the district—and just west of Northside Drive. (We’ve asked Allen Morris reps for clarification and will update this story with any further information that comes.)

Plans call for 331 rentals and 25,000 square feet of retail at street level, as designed by Oppenheim Architecture, with interiors by Square Feet Studio. Atlanta-based Dwell Design Studio is the project's architect of record. It’s considered the district’s fourth phase.

Allen Morris promotion materials indicate the Stella project could start construction in the third quarter of this year and deliver in the second quarter of 2024.

Facets will include “expansive rolling green roofs, cooper-like banding around the slab edges, and panels of seemingly curved glass that represent modern elements [melding] with [the] historic industrial roots of the neighborhood,” according to developers.

Apartments will range from studios to two-bedroom units. In addition to retail, the building’s amenities will include a rooftop “sky lounge” with panoramic skyline views, a movie theatre, and a pool area on the seventh floor.

Current plans call for starting construction on the boutique, 94-key hotel and 283 multifamily units in the same building in the second quarter of next year. Per renderings, it would stand about a half-dozen stories shorter than the Stella apartment building next door.

Perks planned for the Hotel + Residences include an “underground speakeasy jazz bar,” a ninth-floor amenity deck with a cantilevered pool and “botanical bar experience,” plus a recording studio and ground-floor food concept that aims to be best-in-class. It’s expected to open in the third quarter of 2025.

All but three parcels on the planned hotel’s block—those currently home to La Fonda Cantina, Party Execs restaurant, and a small parking lot—have been bought by LLCs since 2019, records show. 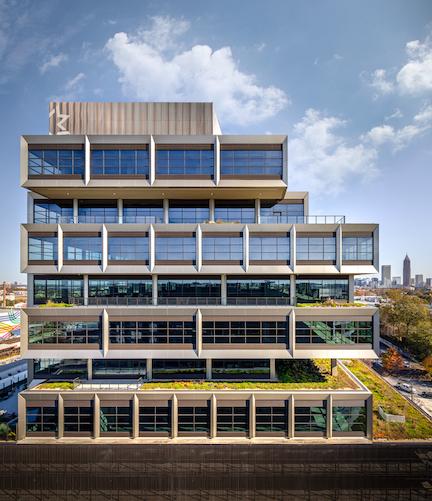