By now, most intown residents with an interest in transportation and clean Carfax reports have probably heard that, figuratively speaking, a snowball has survived the fires of hell and god-awful DeKalb Avenue is getting remade. To an extent.

On Wednesday, officials with the Atlanta Department of Transportation, Mayor Keisha Lance Bottoms’ office, and other agency leaders hosted a groundbreaking ceremony in Inman Park for what’s known as the DeKalb Avenue Safety Improvement Project.

The work will span from Jackson Street in Sweet Auburn to the city limits at Ridgecrest Road near Decatur. That corridor, roughly four miles long, is dotted with six MARTA stations—key destinations for people walking or riding bikes and e-scooters.

The Atlanta City Council approved $5.4 million for the improvements to pothole-riddled, accident-prone Decatur Street and DeKalb Avenue in June. The full scope of the work is expected to take two years to finish, with ATLDOT overseeing all aspects of construction, as officials previously told Urbanize Atlanta.

But delving into the first phase of planned fixes begs the question: Will they be enough? 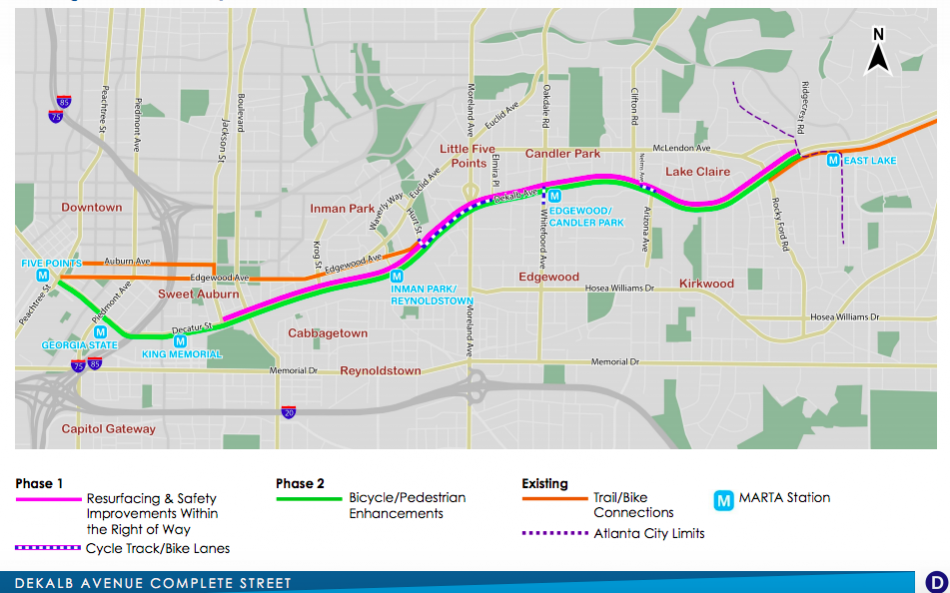 The full scope of the complete street project plans, as detailed by the city last year. City of Atlanta; Renew Atlanta/2020

On the bright side, DeKalb Avenue’s choppy asphalt is finally being resurfaced. The reversible “suicide lane”—a proven source of accidents, per traffic studies—will be swapped out for left turn lanes at key places, such as Krog Street and Arizona Avenue.

Lanes to help protect bicyclists and other non-vehicle travelers on wheels—LIT, or Light Infrastructure Transportation lanes—will be installed in a few places. The longest stretch, at least in phase one, will run from Inman Park’s MARTA station to about a block east of Moreland Avenue.

Another will help non-drivers move from Arizona Avenue—a popular entry point into Edgewood and Kirkwood, near the Pratt Pullman District—toward a system of PATH Trails in Candler Park, and vice versa.

These proposed changes at Arizona Avenue have made the cut. They include turn lanes and a short stretch of protected bike lanes to Clifton Street.City of Atlanta; Renew Atlanta/2020

All of that, clearly, should make for a much safer and pleasant experience in traveling the crucial east-west corridor.

But as the Atlanta Bicycle Coalition—an advocacy group that’s been formally lobbying for DeKalb Avenue upgrades for seven long years—points out, the phase-one upgrades will fall short of the more expansive “complete streets” vision they’d hoped for.

A complete street design had been funded as part of the Renew Atlanta and TSPLOST initiative approved by Atlanta voters in 2015 and 2016. It was cut, however, when funding projections fell short in 2019.

The bicycle coalition has stated it's committed to seeing those initial plans realized as future phases of DeKalb Avenue improvements roll out—if they do.

The agency expects to release a priorities list regarding future projects on the corridor this fall.

“In order to actually build the full vision on DeKalb [Avenue], the city will need to find a new funding source,” ABC leaders wrote in a recent post. “A next TSPLOST is the most likely option if voters approve.”

For further reading, we recommend this ABC comparison of projects that advocates had fought for and what’s actually going to be built. (It’s not all bad news, actually.) And for true wonks looking to wander the weeds, the city’s 78-page breakdown of forthcoming DeKalb Avenue improvements is here.