For more than five years, Upper Westside Improvement District and Friends of Waterworks nonprofit groups have been negotiating with city officials to push back fencing around the Atlanta City Water Works Hemphill Reservoir where Howell Mill meets 17th Street.

The fencing was erected to address terrorism concerns in advance of Atlanta’s Centennial Olympic Games. It’s remained standing for more than 25 years, rendering former park spaces with skyline vistas from downtown to Buckhead off-limits to Atlantans.

That’s about to start changing, according to park supporters.

After receiving Atlanta Department of Watershed Management approval, work is expected to start in January to move fences back toward the water reservoir, returning about 2 acres of the campus lawns to public uses—at one of the highest points in the city.

The site’s views, especially to Buckhead, are spectacular. It’s been coined Waterworks Hill, or The Hill. 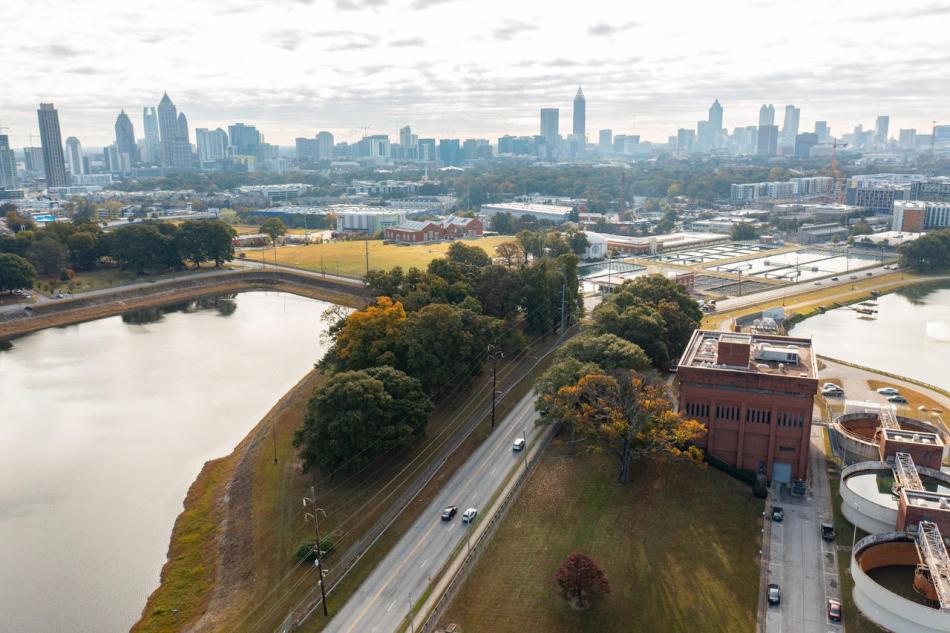 An overview of The Hill at Atlanta Waterworks (to the left of the road at bottom), as the 2-acre greenspace is known. Courtesy of Upper Westside Improvement District, Friends of Waterworks

The Upper Westside Improvement District, a CID formed in 2016, is expected to help with the fencing relocation work and will oversee park maintenance, officials said. Leaders envision the greenspace as a popular destination for picnics and photos, a rival to Jackson Street bridge’s downtown vistas on the flipside of town.

“[We have] never given up on the effort to open the reservoir grounds,” Elizabeth Hollister, Upper Westside’s CID executive director, said in an announcement today. “The residents and the businesses tell us they want more parks in the [area], and we have a huge, magnificent space which was once open to everyone and will be again.”

Collectively, about 147 acres surround the waterworks complex. Chris LeCraw, Friends of Waterworks co-chair, said the group hopes to partner with the city’s Watershed Department to open more space. They’ve been lobbying for returning the land to public uses for more than a decade.

Atlanta’s reservoirs in the area were public spaces until the 1990s, hosting school track meets, proms, and even a “world-class BBQ pit” near a gazebo and lodge for decades, officials noted.

Park advocates said Watershed Commissioner Mikita Browning recently led an analysis that found the city could maintain water treatment operations while opening a portion of the land, an initiative that received vocal backing from the district’s city councilmember, Dustin Hillis. As a candidate, Atlanta Mayor-elect Andre Dickens also voiced support for the waterworks park initiative during a forum, according to the Upper Westside CID.

Preliminary work is expected to start before the end of 2021. The city is planning infrastructure improvements including sidewalk upgrades to support the public uses, and the Upper Westside CID has requested a traffic light at the point where Howell Mill meets 17th Street.