The head of a company that made waves in Atlanta for wanting to turn neighborhoods near Turner Field into a Dubai-like, multi-billion-dollar mega-build with tropical lagoons says plans for the city’s tallest, sleekest skyscraper are moving forward.

No locations have been nailed down, and RitaWorld Inc. doesn’t currently own an acre in Atlanta. Isima says financing will be a mix of investor partnerships, foreign capital, bonds, government incentives, and possibly opportunity zone funding for some projects.

“We’re looking at several locations for each building,” Isima, an Atlantan whose company is registered in Georgia to an Alpharetta office near Avalon, wrote in an email. “We don’t control these locations but will partner or buy out any location that works best.”

Chief among Isima’s ambitions is a crystalline, pointed, mixed-use tower of glass called the One Tower by RitaWorld.

Last year, the company hosted an international design competition and picked a concept by New York-based Park Architect that would stand roughly 1,500 feet—qualifying for “supertall” status and dwarfing Atlanta’s tallest building, Bank of America Plaza. Like an elegant dart, the curving structure would be topped by a ring that sparkles like diamonds. 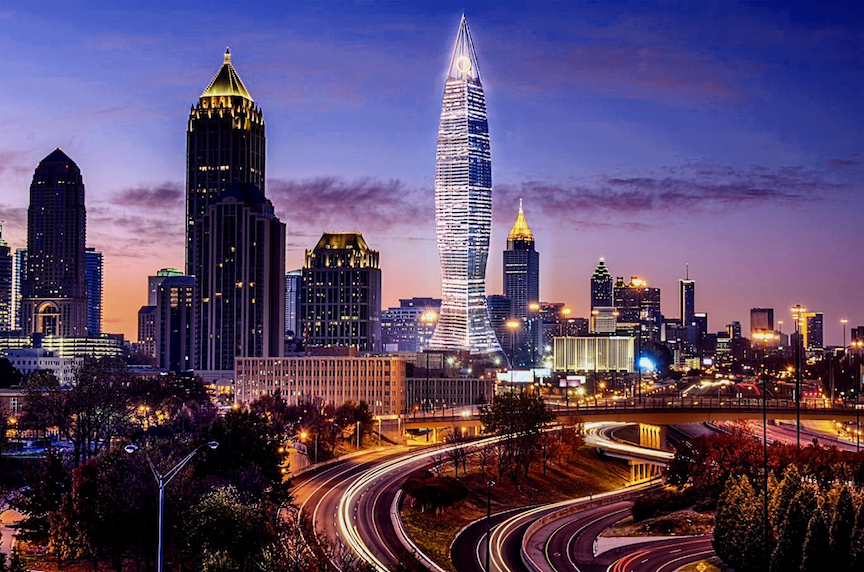 How the building would alter Atlanta's skyline from a West Peachtree Street site. Courtesy of RitaWorld Inc.; designs, Park Architect 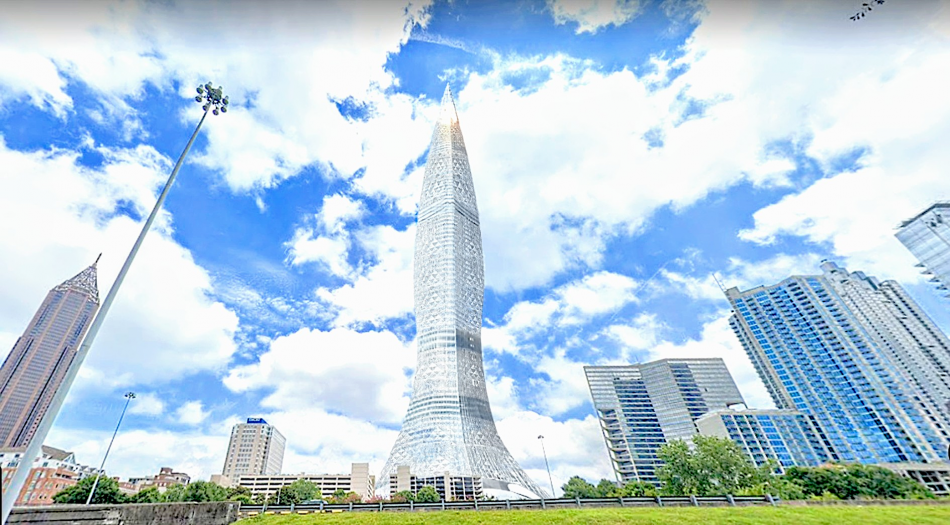 Isima said talks with partners and project designers have begun. He expects the supertall venture will be officially proposed later this year, with groundbreaking to follow within 15 months.

Other potential locations, per Isima, could be surface parking lots in the 400 block of Peachtree Street NE downtown, or the vacant Atlanta Civic Center property. 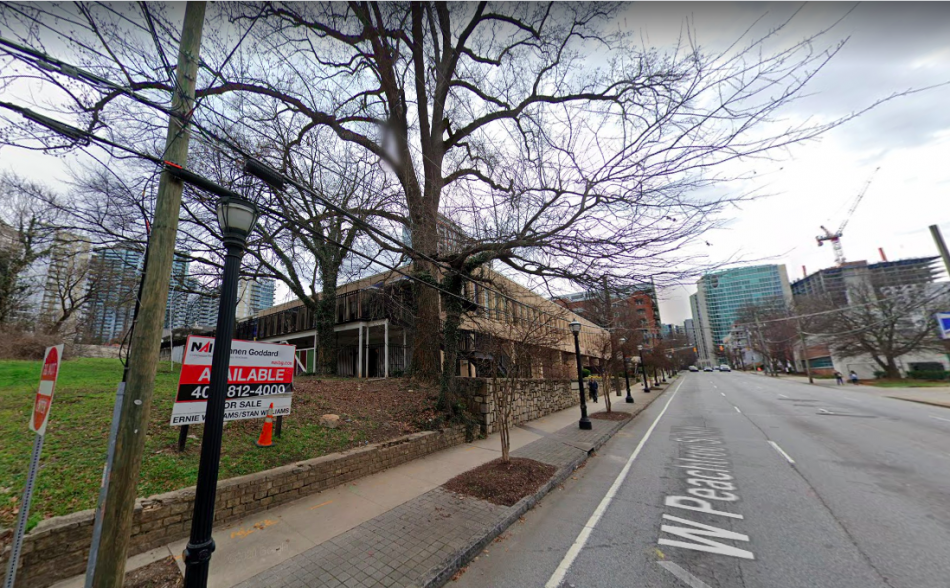 One site at 1072 W. Peachtree Street that RitaWorld Inc. is eyeing. Google Maps 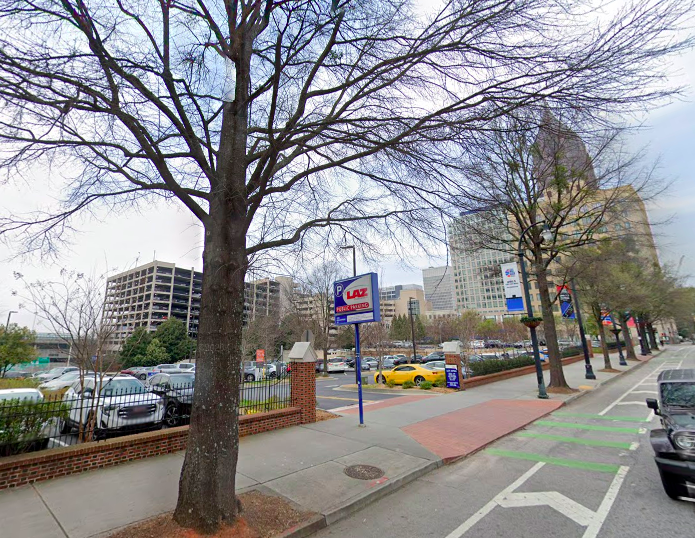 Elsewhere, other Midtown blocks west of Peachtree, south of 14th, and north of 10th streets would also be sufficient, per Isima.

Several other RitaWorld towers are in various states of discussion, including an Art Deco-inspired concept Isima calls “Ombre” that would rise between 700 and 900 feet, with hotel and residential uses.

Isima hopes that project would replace parking near Centennial Olympic Park, though he says one of the Midtown sites or a Peachtree Road location in Buckhead would also suffice.

“It will be a mix of old-fashioned, blending to modern, and futuristic architecture with the Art Deco theme,” says Isima.

Another concept would bring a “high-end lifestyle car-themed residence and hospitality midrise building” to Midtown, Buckhead, or the Dunwoody/Sandy Springs area, Isima says.

Isima, son of late Nigerian soccer player Okey Isima, has previously told local media his company has development experience in Singapore and the Caribbean. (The "Rita" in RitaWorld is an ode to his mother's name.) That would help explain his extravagantly exotic proposal when the former Turner Field property came up for grabs five years ago.

Fear not, Isima says, the dream of RitaWorld Pearl Kingdom has not died. It just might have to be built in suburban Atlanta, or other potential locations from San Diego’s eastern burbs to northwest Dallas and eastern Birmingham that Isima and company are also considering. 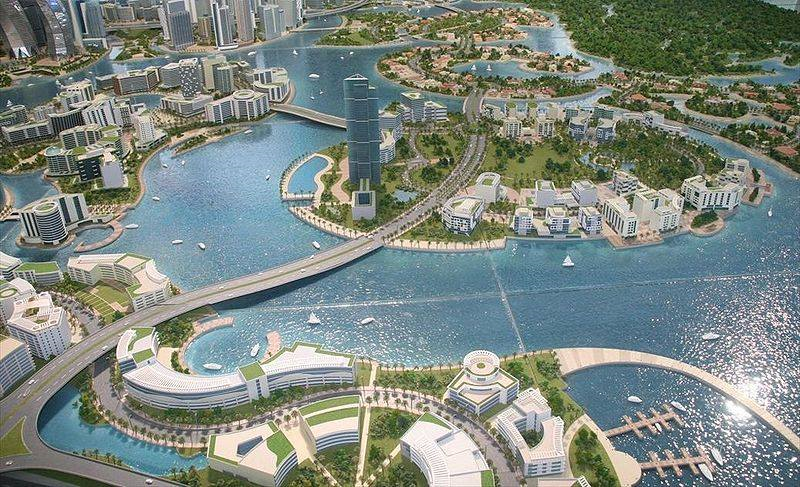 “Right now, RitaWorld Pearl Kingdom is ongoing,” Isima wrote. “We plan to start in stages in the next couple of years… We have approvals and hope to implement it in a big enough area in Atlanta” or another market where a self-sufficient megaproject might fly.

Wherever RitaWorld Pearl Kingdom might materialize, one thing’s for sure: There will be water.

“We’re working on zoning in an area not to be mentioned, and our original plan of a large lagoon will stay, but we’re considering making the lagoon and lagoon river to give an appearance of a waterfront,” Isima explained. “We also have a plan to build in phases, build many units, including subsidized affordable, luxury, and mid-market [housing]. We will have multiple zones.”