But nearly half a year later, observers are starting to worry about what they call a lack of construction progress at the 1980s building developer Dewberry Capital (formerly Dewberry Group) had started tearing apart prior to COVID-19 lockdowns—only to leave idle for more than two years.

The construction crane still lords over the site, and more than eight stories of windows have been removed, in addition to interior demolition and other work.

But as the drone tour in the gallery illustrates, the building and site can be devoid of activity during what are usually busy times for construction—with agreeable weather conditions. The photos were taken at 12:30 p.m. on a recent weekday.

“There seems to be some very slow activity at the building, utilizing few workers,” a Midtown resident who lives nearby tells Urbanize Atlanta. “Mainly they seem to be removing old facade pieces and the large A/C units from the roof. Perhaps after they remove all the old remnants of the building, more workers will be on site.”

Dewberry Capital officials haven’t responded to an inquiry for details on where construction stands at this point. 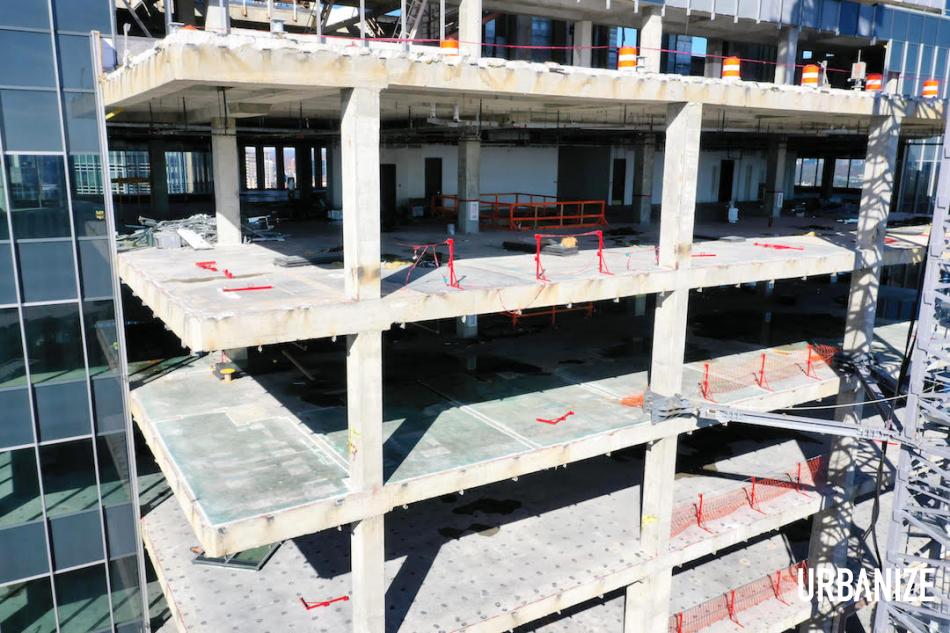 Upper, exposed floors of the Campanile building's redevelopment, as seen in the early afternoon Thursday.

Built in 1987 as Bell South’s corporate headquarters, the original 450,000-square-foot Campanile was purchased by Dewberry in 2010. The design update at the tower’s base has been more than six years in the making.

In May, Dewberry associates filed permitting paperwork to remove the 21-story building’s roof-level structure. Other work is removing precast concrete cladding from the Campanile’s exterior façade, according to filings with the City of Atlanta’s Office of Buildings.

Dewberry associates revealed designs earlier this year for a more ambitious Campanile redo than previous plans that had stalled. According to those plans, Dewberry is adding six new floors of offices atop the tower, bumping the height to 27 stories. New designs also call for roof terraces at levels 23 and 27—and for replacing the building’s existing skin with a curtain of stone and glass on all floors.

Other facets of the reimagined building “will create an environment that stimulates pedestrian activity for the Campanile project and the Midtown community,” with retail fronting Peachtree, 14th, 13th, and Juniper streets, according to earlier filings.

Dewberry has blamed Campanile’s delays on several factors, including a dispute with a contractor, the pandemic, and one marquee tenant (SunTrust, now Truist Bank) relocating and consolidating its offices downtown. The AJC found last year that “financial snags” had also taken a toll, including a $186-million loan considered to be distressed.

In the gallery above, find a sky-high vantage point on where the Campanile remake stands right now, nearly three years after work started at street level.