For droves of Atlanta residents relatively new to the city, or people who’ve come of (drinking) age over the past decade and a 1/2, the phrase, “Let’s go out in Buckhead Village” holds a wildly different meaning than it used to.

Sure, Atlanta’s monied northern district has no shortage of bars and nightlife options today. But it used to be a mecca of them. A shimmering, somewhat ramshackle hub of big drinks, bigger cars, and loud revelry that spilled deep into the night—if not until daybreak.

Where Billy Reid, Bonobos, and Dior do business today, an estimated 100 bars and restaurants once roared and thumped within a two-and-1⁄2-block radius, well beyond midnight. Buckhead Village was like a more compact version of Austin’s Sixth Street, with less focus on live music and dancing than generally getting down and hooking up. 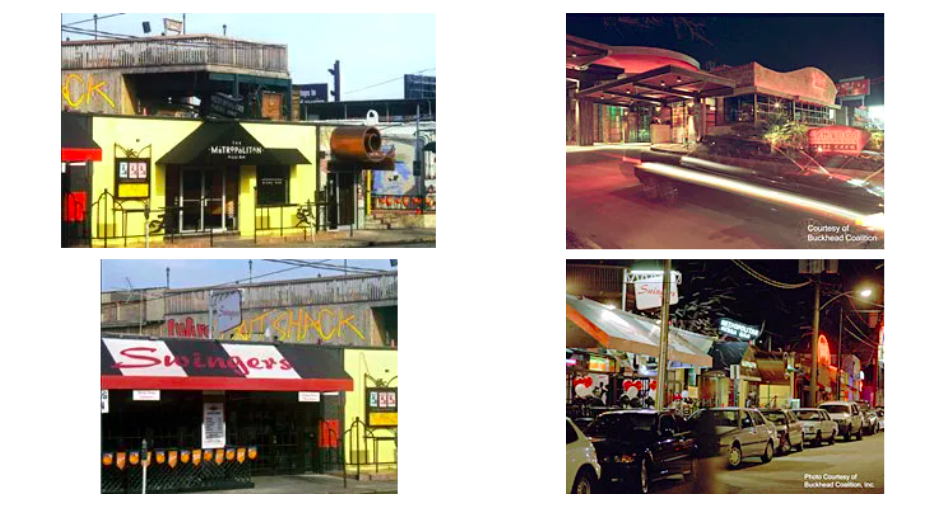 Vintage scenes from around the raucous Buckhead Village that was. via Buckhead Coalition

And then it all officially ended, 15 years ago. The final nail in the coffin for Buckhead's reputation as a raucous, all-night party zone came in 2007, when dignitaries including then-Mayor Shirley Franklin, homegrown developer Ben Carter, and even a famed sculptor gathered next to cranes and backhoes in Buckhead Village. In the August heat, they pronounced Buckhead’s wild days dead, by bulldozer decree. The dawn of a highly refined retail and lifestyle district, they said, had arrived. For those who loved Buckhead’s former party spirit, it may have been shocking, but the district’s downfall was not sudden.

Carter himself had once described the core Buckhead Village to the New York Times as “Bourbon Street at the entrance to Bel Air.” A generation flocked to the area around Peachtree and Pharr roads for boundless nightlife options that didn’t close until the wee hours. In 1985, Buckhead Village adherents made a cheesy video about the experience—“One Night in Buckhead,” set to the music of “One Night in Bangkok”—that still lingers like a dad joke on YouTube.

But then everything—at least according to Buckhead leadership at the time—got a little too wild.

An incident involving NFL legend Ray Lewis in 2000—during which two men were fatally stabbed following the Georgia Dome’s last Super Bowl—was probably the nadir. The bars began shuttering (some would say forced out by city regulations) and developers started assembling property. By July 2007, Carter had spent $210 million buying about 8 acres in the Village, with plans to start razing it all within weeks. The AJC’s Bill Torpy relayed this description that month: “Along Peachtree, the sign for Club Chaos has been whitewashed; the plate glass front door is smashed and boarded up. East Village Grill’s neon sign promising ‘Late Nite Breakfast $3.99’ is unplugged. And the entrance to Lulu’s Bait Shack is rotting.” 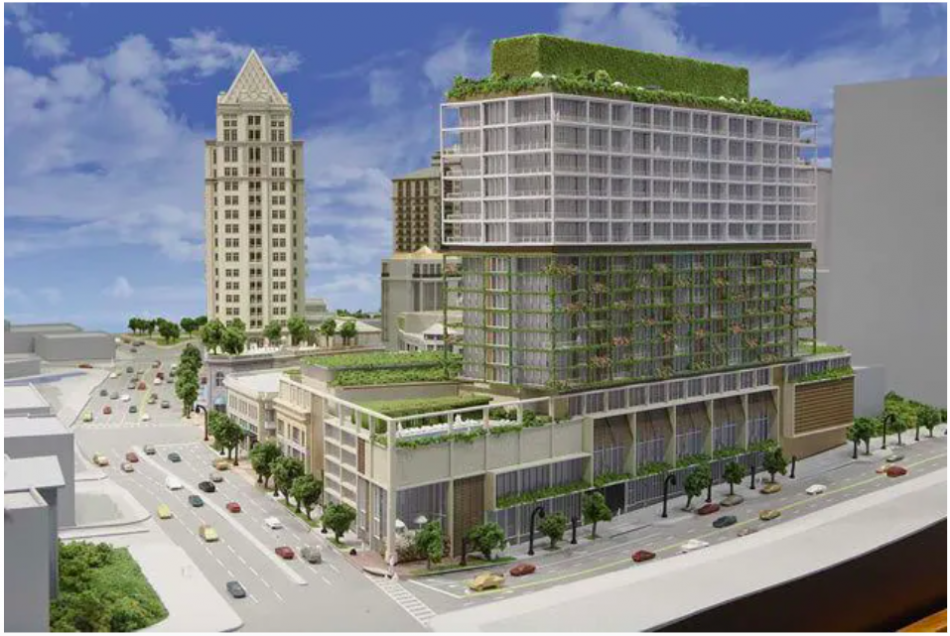 Carter’s original Streets of Buckhead vision, a casualty of the Great Recession. Carter

Steak Shapiro, a longtime Atlanta radio and TV personality, staged a “Bye Bye Buckhead” party that saw 12,000 people show up. Shapiro didn’t mince words in an AJC interview: “It’s horrible. It’s terrible," he told the newspaper in 2007. “Buckhead Village was known around the world. It was the epicenter of the city, the place Atlanta was known for, and the place where, when you got to town, that’s where you wanted to go. For this city to let it deteriorate and think they are better off with retail and condos is just wrong.” But that’s what happened. Just not quite according to plan. And not with condos but upscale apartments.

Carter plowed forward with his magnificent, $1.5-billion Streets of Buckhead vision in 2007, with hopes of opening this “Rodeo Drive of the South” in 2009. The Great Recession nastily interfered; by 2010, investors who were $320 million in the hole on Carter’s concept—it was literally a massive hole—brought in a new developer, San Diego-based OliverMcMillan.

In 2014, on the ashes of establishments like Club Uranus, Mako’s Cantina, and Cobalt Lounge, OliverMcMillan debuted the haute retail and dining hub known as The Shops Buckhead Atlanta. The awkwardly named, 365,000-square-foot district drew coveted, upper-crust retail names (Jimmy Choo, Etro, Brunello Cucinelli, Etro, Hermès, etc.) but never quite took off. Foot traffic was relatively scant, and some rents astronomically high. By 2018, OliverMcMillan had quietly slipped the six-block property onto the open market.

In September, Jamestown officials announced 12 new leases at Buckhead Village and reported gangbusters sales across the first half of 2022 for both shops and food-and-beverage tenants.

For the second year running, beginning later this month, Jamestown is planning to turn the Village into a technicolor holiday spectacular and host the Atlanta Christkindl Market.

Instead of Lulu’s giant, lethal fishbowls, expect German Glühwein to be served. And maybe hoist a glass to the wild Buckhead Village that once was. Unless you don’t really remember—despite being there—those nights before the bulldozers swept through.