Bicycling advocates in Brookhaven are concerned that proposed changes to busy intersections near Interstate 85 will make the area irrevocably more hostile to anyone not driving a car.

The Georgia Department of Transportation says the roughly $41-million road overhaul is necessary to reduce abnormally high crashes and congestion where I-85 meets North Druid Hills Road—and that implementing bike lanes or other pedestrian safety measures is beyond the scope of current budgets.

According to the Brookhaven Bike Alliance, the area in question is particularly critical for non-vehicle accessibility because it neighbors the first opened section of Peachtree Creek Greenway. That multi-use trail runs for a mile now but is expected to eventually be expanded to 12 miles, linking north ITP cities Chamblee and Doraville down to the Atlanta BeltLine.

GDOT’s plans call for installing a Displaced Left Turn Interchange over the 12-lane interstate and other lane adjustments.

Lanes over the existing I-85 bridge and along an access road would be reconfigured, with two lanes added, and the nearby bridge over Peachtree Creek would be replaced with a wider structure to accommodate new traffic patterns, per GDOT’s plans. 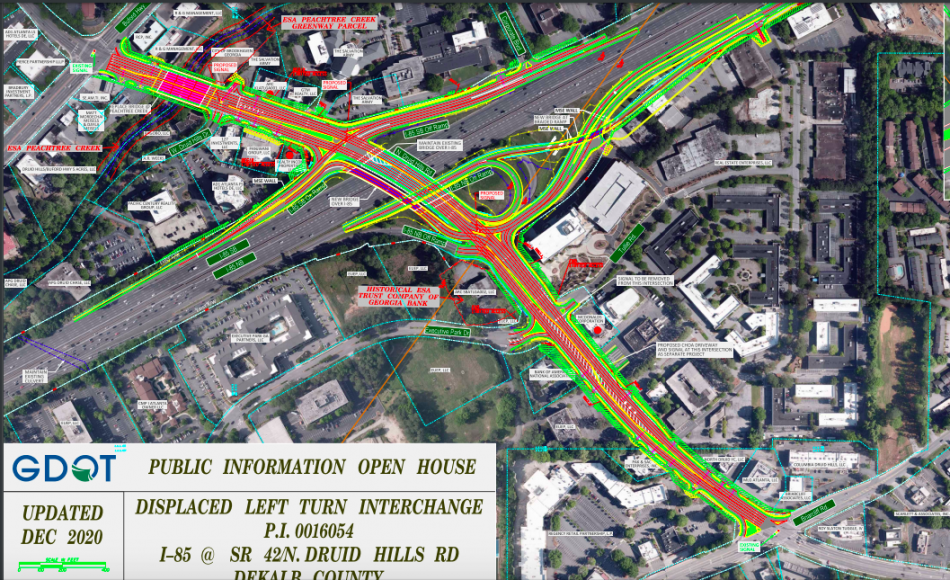 The area in question near the 12-lane interstate. Georgia Department of Transportation

But the Brookhaven Bike Alliance, which counts nearly 500 members, contends the project is ignoring pedestrians and cyclists by not only installing no protected non-vehicle infrastructure—but removing one of two five-foot sidewalks along the road.

Adam Treaster, a member of the bike alliance’s leadership team, calls the installation of a shared 10-foot path over the bridge “necessary” for accommodating cyclists, “especially given the proximity to the Peachtree Creek Greenway.”

Treaster authored a March letter on behalf of the bike alliance to GDOT asking that plans be revised. Right-of-way acquisitions for the project are expected to being this month.

“Of course a no-build makes the most sense,” Treaster wrote in an email to Urbanize Atlanta. “But narrowing the [proposed] lanes on the bridges from 12 to 11 and ½ feet, as they are today, to accommodate a [multi-use path] is extremely reasonable.” 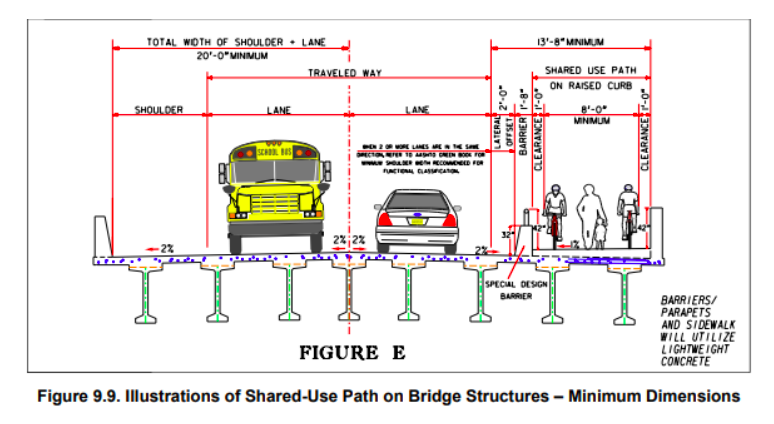 The type of Complete Streets overhaul the bicycle association is pulling for on North Druid Hills Road. GDOT illustration, via BBA

As part of a formal response in May, GDOT’s director of program delivery, Albert Shelby III, relayed that the department shares the cycling group’s concerns regarding the safety of people traveling by bike and foot through the area.

But costs of securing additional right-of-way (estimated at $3.9 million) for a multi-use path, or widening the existing bridge to accommodate five-foot bikes lanes throughout the corridor (roughly $3.8 million) would not be feasible, per GDOT’s response.

Reducing the width of lanes wouldn’t work, per GDOT, because turning large trucks will require the extra space.

“To add access for bicycles would mean widening the [I-85] bridge, which is not in the current project scope,” Shelby wrote. “This would also mean incurring a higher cost than is fitting for this project’s need and purpose.

"In addition," Shelby continued, "per the concept report, there are no bicycle accommodations along the corridor, so there would be no natural connection for these bicycle lanes. Currently the project proposes to accommodate pedestrians with a five-foot sidewalk on the north side of the bridge.”

We’ve reached out to GDOT officials, offering the chance to comment further, and will post any responses that come.

• Builder: 167 Brookhaven townhomes off Buford Highway have all sold out (Urbanize Atlanta)