A uniquely shaped apartment building designed to look contemporary while tipping its cap to nearby Ponce City Market is starting vertical construction in a high-profile Old Fourth Ward location.

The building marks the first residential component at New City Properties’ Fourth Ward project, a 12-acre, modernist mini-city that could cost upwards of $1 billion and require a decade to finish.

The building’s stair-stepped shape and other materials are designed to echo its more modern neighbors.

“It’s intended to complement both the adjacent projects we’re doing and Ponce City Market,” Irwin said in an interview Monday, explaining design logic. “It’s also important for us to use real materials. It will distinguish itself in the neighborhood because it’s of real concrete construction and brick masonry.” 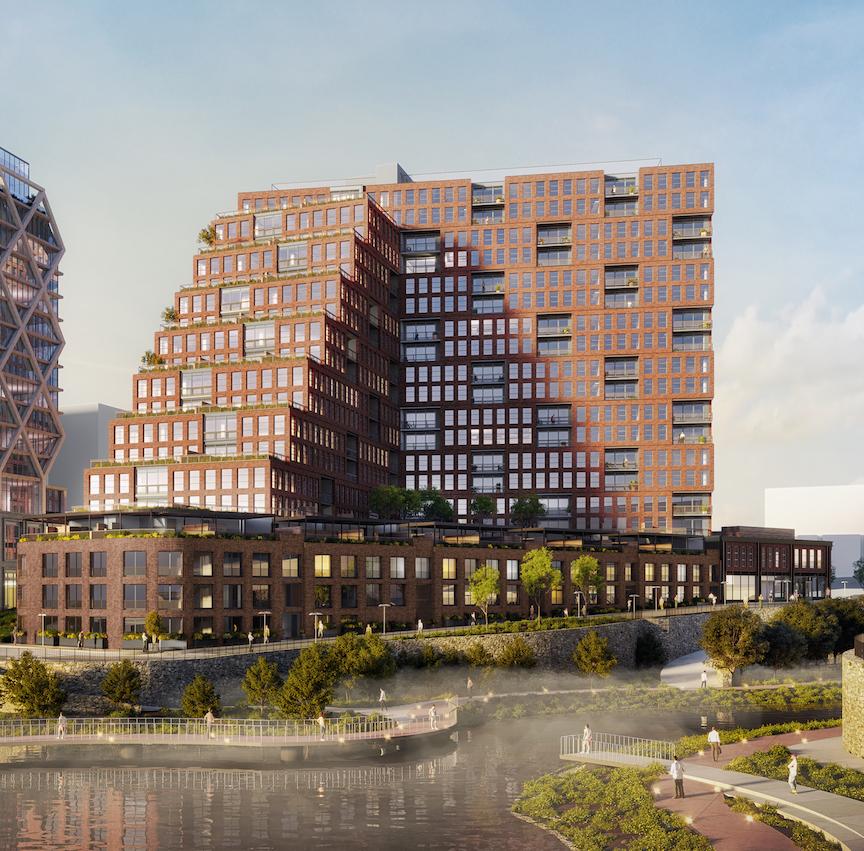 A new rendering shared with Urbanize Atlanta that illustrates how Dallas Street will be altered so that park space extends to the doorsteps of townhomes. Renderings courtesy of New City Properties; design architecture, Olson Kundig 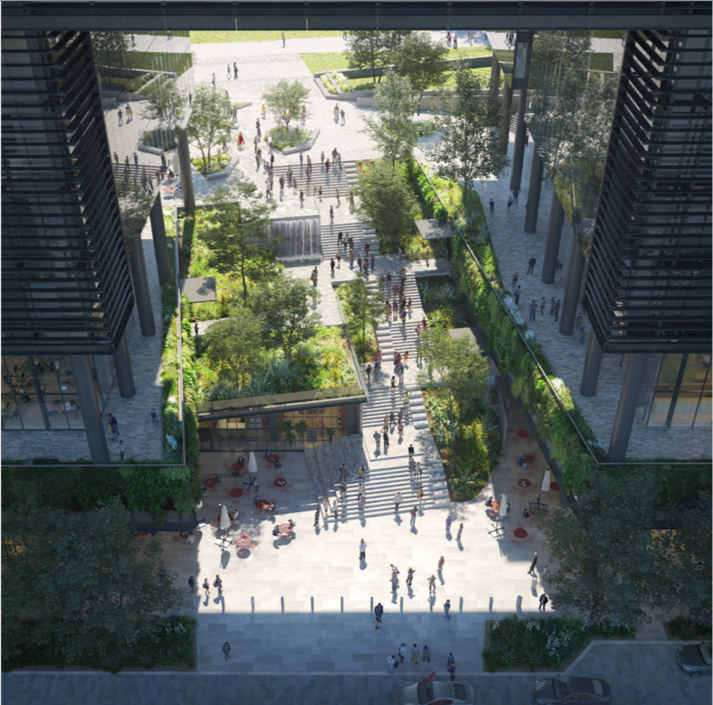 The landscaped stairway with a water feature leading from the BeltLine to the plaza's retail and underground parking. Courtesy of New City Properties

Irwin says the apartments are scheduled to deliver in April 2023, with 10 percent reserved as affordable housing for anyone earning 60 percent of the area’s median income. Options will range from studios to three-bedroom homes, and renters will receive memberships to a fitness and social club that’ll be built in conjunction with a boutique hotel next door.

The building’s podium will include live-work townhomes—or maisonette units, as the French say—that will front the park and not a public street.

“We’ve worked very closely with the City of Atlanta to reroute traffic on an extension of North Angier and Rankin [streets] through the site, and in doing so, they’ve allowed us to re-graft Dallas Street back into the park,” Irwin says.

That will provide a mix of greenspace and permeable hardscapes open to pedestrians that wraps the perimeter of the site, from Rankin Street to a recently installed public elevator to the BeltLine. 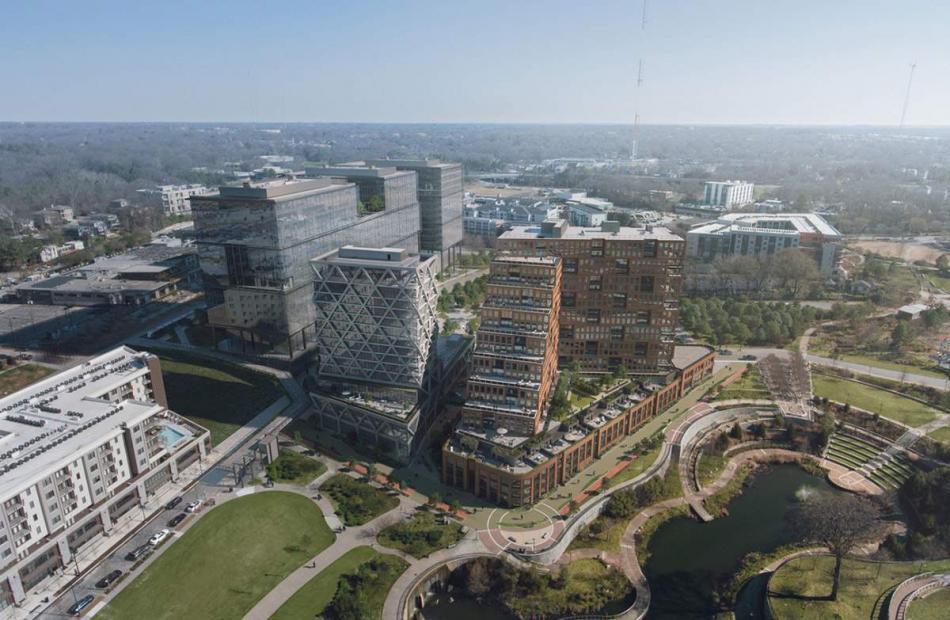 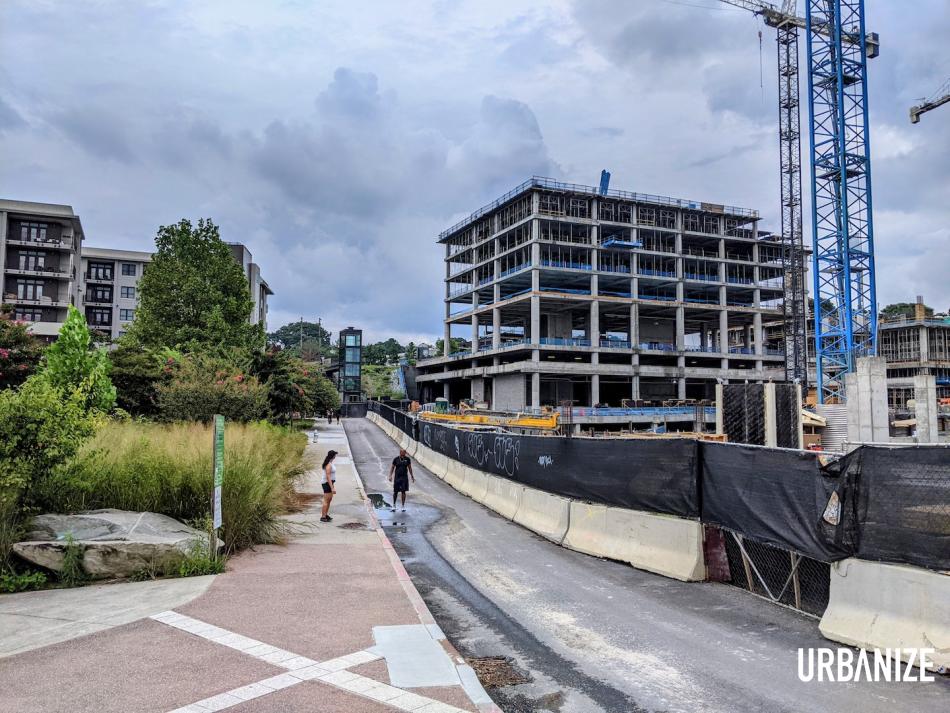 Irwin notes the apartment stacks will be set back from the edge of the park to allow for better views from the ground up—and to heighten the sense the greenspace is bookended by noteworthy buildings.

“We’re trying to play up this neat interplay with the park itself, so that you get these really epic, postcard views of the stair-stepping structure, similar to what you think of in Millennium Park in Chicago, with beautiful buildings lining a world-class park,” says Irwin. “We’re really trying to create that environment here in Atlanta.”

The overarching vision for Fourth Ward project calls for 1 million square feet of offices, 200,000 square feet of retail arranged around a central plaza, a 75-key boutique hotel with its own unique brand and fitness/social club, and about 1,100 residences total.

Irwin says the hotel is on pace to break ground early next year. Phase one is also set to include 1,250 underground parking spaces.

Digital marketing giant Mailchimp announced last year its plans to decamp from Ponce City Market, where it’s the largest tenant, for a new 300,000-square-foot headquarters a couple of blocks south at New City’s project. The company will occupy about two-thirds of the first two 11-story office towers, including all sky-bridge floors.

Those buildings—standing seven and four stories today—are on schedule to finish next September, Irwin says. 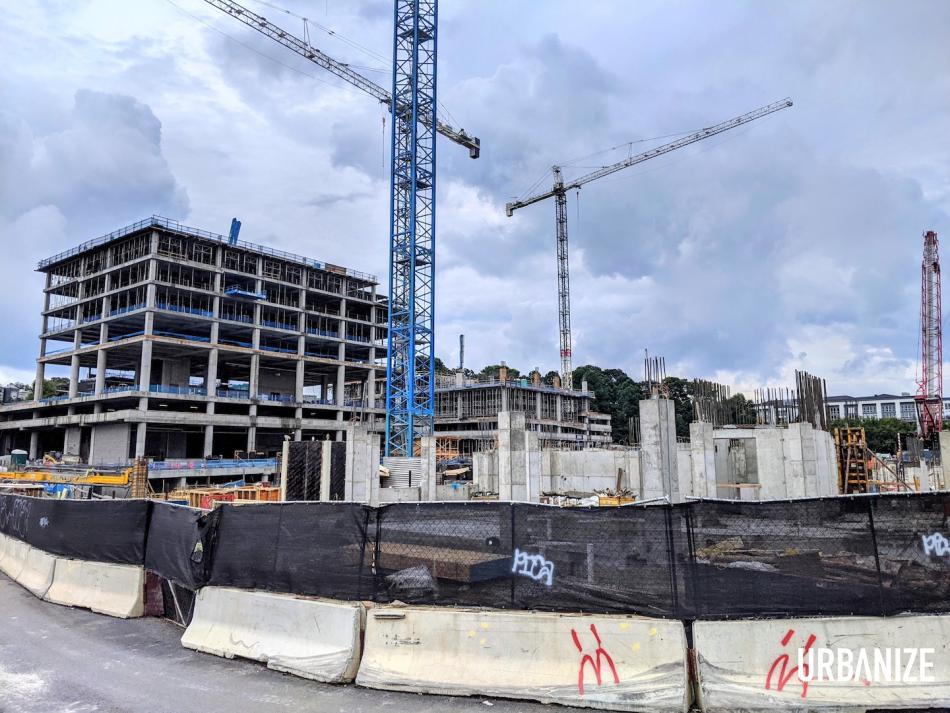 Initial floors of office buildings where MailChimp will relocate, at left, and the beginnings of the apartment building, as seen today. Josh Green/Urbanize Atlanta 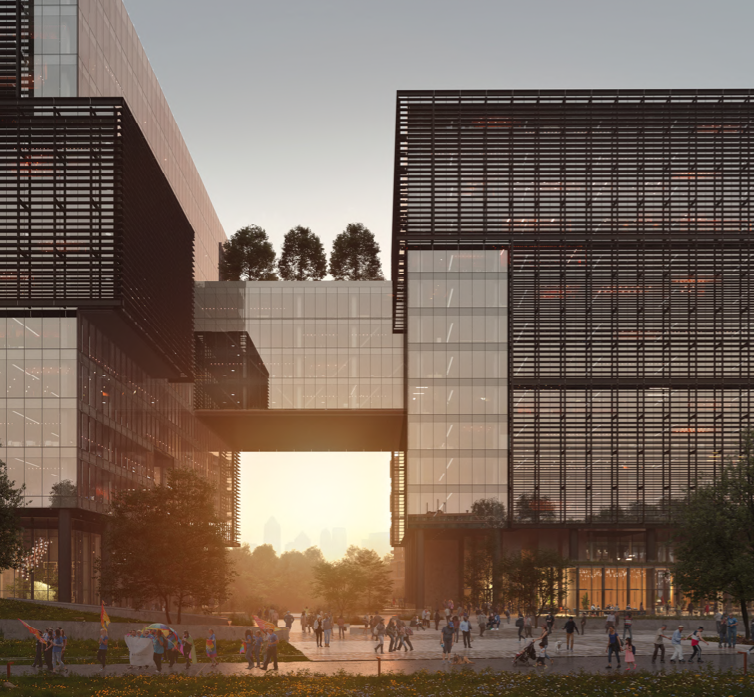 The skybridge and connection to a planned interior plaza. Courtesy of New City Properties

A third, taller office tower on the southernmost site along the BeltLine is planned for a future phase, along with further development on remaining acreage. Future phases will include approximately 1.2 million square feet of additional density.

Fourth Ward Project attracted headlines and criticism in 2019 when $22.5 million in Invest Atlanta public funding appeared to be headed its way—a supposed economic development tool in a section of town already exploding with investment. New City ultimately backed away from that funding, though it remains a possibility in the future, Irwin has said. 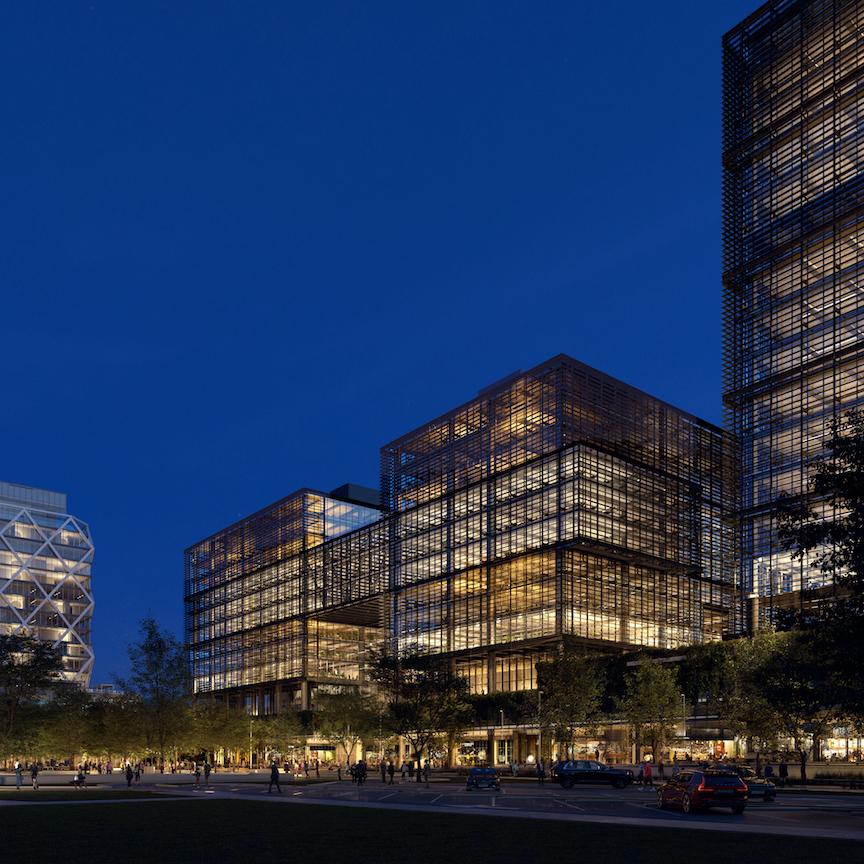 The planned boutique hotel, at left, and the first two office buildings. The taller tower at right will be the final phase one component.Courtesy of New City Properties