Maybe it's inconceivable for Atlanta newcomers, but back in the development dead zone that was recession-plagued 2011, it was kind of a big deal when a hotel project had the gall to actually begin construction in Midtown, eventually rising a grand total of 12 stories.

In terms of overall new construction, metro Atlanta’s real estate scene has changed more dramatically since then than almost anywhere else in the country, according to a new analysis.

STORAGECafé slots metro Atlanta as the fifth-most active U.S. real estate development market over the past decade across all sectors—and the only Southeast metro to rank in the top 10 beyond Miami at No. 9.

The top two slots went to Texas boomtowns Dallas and then Houston, followed by New York, Phoenix, and Atlanta, per the findings. 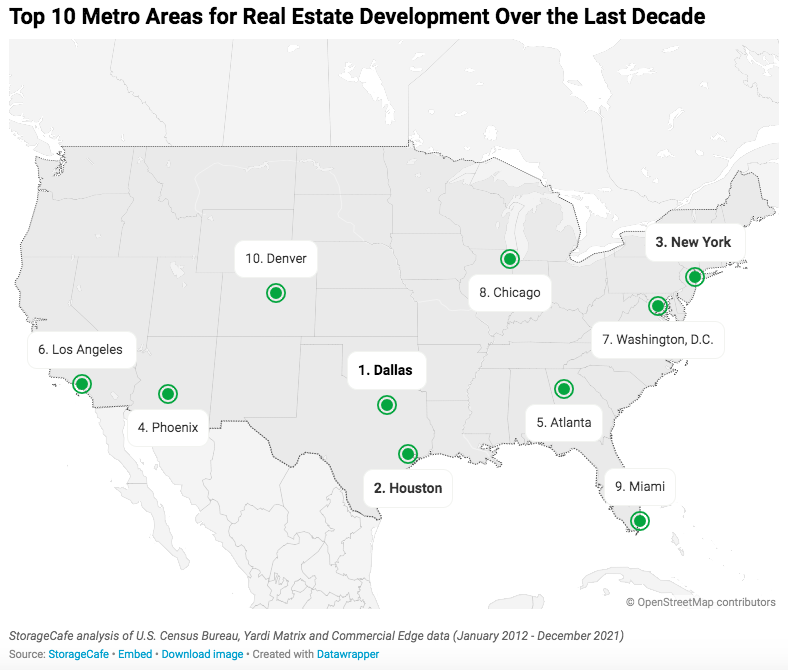 “Both the Phoenix and Atlanta metros seem to be punching above their weight,” researchers summarized. “With populations of around 5 million and 6 million, respectively, the two metros come ahead of Los Angeles and Chicago, showing remarkable real estate growth over the past decade.”

Midtown's skyline roughly five years ago. Much has changed since. Shutterstock

STORAGECafé pulled data from sources such as the U.S. Census, Yardi Matrix, and Commercial Edge to create a snapshot of sheer construction in America’s 50 largest metros between January 2012 and December last year.

One notable number: Metro Atlanta added nearly 99 million square feet of new industrial space in the decade studied. That’s been sustained by a demand for warehouse space from huge corporations such as Amazon, Kellogg’s, and Lowe’s.

In terms of housing, an influx of new residents has translated to building permits for single-family homes shooting up during the pandemic in Atlanta, as with the two Texas titans. More than 222,000 permits for standalone houses were issued in the decade studied for metro Atlanta overall.

Roughly 88,000 multifamily permits were issued in that timeframe, too, with a lackluster metro-wide showing in 2020 (just 3,700 permits) doubling last year, the study found.

It’s no coincidence that population estimates show the City of Atlanta’s resident count has swelled by almost 22 percent since 2011—up to roughly 523,000 people today, an all-time high.

Other estimates show the Atlanta region has packed on nearly 1.4 million people in that timeframe.

That’s like adding the equivalent of Georgia’s next three largest metro areas—Augusta, Savannah, and Columbus, respectively—since an Atlanta fifth-grader today was born.