On Halloween night, it briefly appeared the Atlanta Braves had their first World Series title in 26 years in hand like a king-size Snickers on the doorstep of history, but with this being Atlanta, nothing in sports comes easy, and the MLB Postseason drama continues.

To whip up excitement on the Braves’ home turf—and capitalize on the extended competition—the Braves organization has announced a Watch Party inside Truist Park for tonight’s Game 6 against the Houston Astros in Texas. (Should the Bravos win, they’ll clinch the World Series, so let’s hope Wednesday’s Game 7 never has to happen.)

The storied baseball franchise is inviting Braves fans to sit in reserved seats in the ballpark or pop a squat in the outfield grass to cheer on the team via the stadium’s massive LED scoreboard. Crowds grew so large before Sunday’s Game 5, Cobb County officials made the decision to close the mixed-use Battery to everyone but ticket-holders, citing high volumes of fans attempting to jam the streets.

The Braves organization wants to keep that spirit and momentum going—within the controlled confines of the stadium. Gates open at 6:30 p.m.

Root-rooting for the home team won’t be free, however. Tickets start at $10 for Lower Level (from foul pole to foul pole) and Terrace Level seating.

A seat in the Infiniti Club costs $20, and access to the outfield grass is $75 per person. All seating is first-come, first-served. 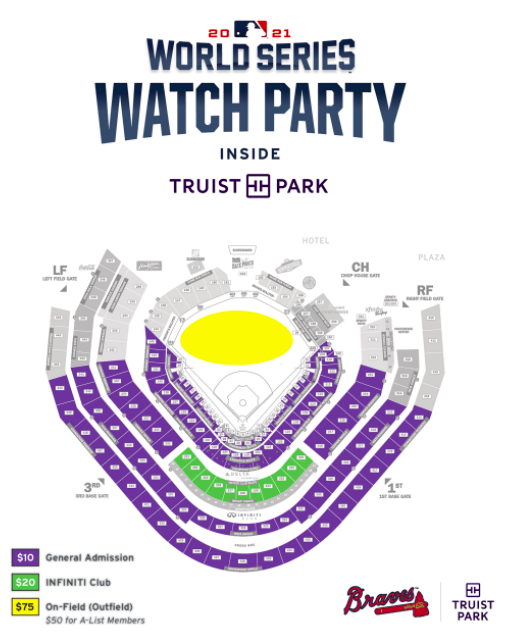 The seating chart—and pricing—for watching the Braves in the World Series. Atlanta Braves

Concessions will of course be open throughout Truist Park. Beyond the Battery, parking is available (and free for up to three hours) in the Red, Green, Purple, Yellow, and Silver decks.

With first-pitch temps predicted to dip around 60 degrees tonight, anyone headed to the ballpark might want to lug along a warm jacket—and no shortage of optimism.